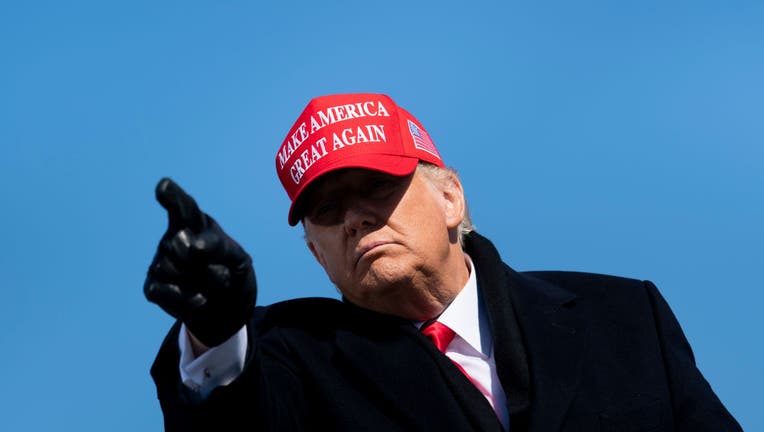 WASHINGTON - Winston Churchill was not known for leaving his thoughts unspoken. One of them was this: “It has been said that democracy is the worst form of government, except for all those other forms that have been tried.”

President Donald Trump, who has professed admiration for, if not deep knowledge of, the British prime minister, is putting Churchill’s observation to one of its greatest tests by refusing to accept the results of an election that delivered victory for Democrat Joe Biden. Trump’s predecessor, Barack Obama, calls this a “dangerous path” for the United States.

Trump has forced a dusting off of the arcana of the procedures for the Electoral College, which for almost the entirety of the nation’s history has been a formality and not an instrument to overturn people’s votes.

A sitting American president is, for the first time, trying to convince the people that they should not believe the numbers that clearly demonstrate his rival’s win. Rather, Trump is making baseless claims of massive fraud, demanding recounts and calling for audits in an effort to discredit the outcome and, in the process, put democracy itself on trial.

It’s possible that the mercurial president is one tweet away from a change of heart, but so far that is not the case. And the sweeping majority of his fellow Republicans are allowing him to play this out.

Obama, who invited Trump to the White House soon after Trump’s election four years ago and pledged cooperation in the transfer of power, is not shocked that a man who “never admits loss” is refusing to acknowledge defeat now.

“I’m more troubled by the fact that other Republican officials, who clearly know better, are going along with this, are humoring him in this fashion,” Obama told CBS’ “60 Minutes.” “It is one more step in delegitimizing not just the incoming Biden administration but democracy generally. And that’s a dangerous path.”

With one eye on Trump, Republicans may have the other fixed on Georgia, where they want his energy to help their candidates win two Senate runoffs in January and ensure at minimum that Biden has to deal with divided government. Republicans have seen how Trump batters dissidents, and few have chosen this consequential moment to cross him.

“Republicans are sticking with him out of fear,” said Eric Dezenhall, a crisis management expert who worked in communications in Ronald Reagan’s White House. “Fear has always worked for Trump. Tantrums have always paid dividends.

“Republicans fear if they don’t stand by him, one midnight tweet will cost them Georgia,” he said. More broadly, “they don’t want to anger him.”

Trump is using not just his sway over the party but also the levers of government to keep Biden at bay at least for a while longer.

An agency little known outside Washington, the General Services Administration, has held off on recognizing Biden as the president-elect, denying him access to the money, offices and machinery routinely afforded to the incoming team. Biden has also been denied the classified briefings that previous presidents shared with presidents-elect so that rising national security threats don’t catch the next administration and the country off guard. Trump installed loyalists at the Pentagon and fired his defense secretary after Biden’s victory.

In the meantime, a contagion of falsehood has been spread from the losing side, magnified on social media and given brute force by Trump himself.

In Philadelphia, a beleaguered city commissioner on the panel responsible for conducting and counting the vote said he’s been stunned by the traction that wild tales of fraud have gained in the state that clinched victory for Biden. The commissioner, Al Schmidt, is a Republican.

“One thing I can’t comprehend is how hungry people are to consume lies,” he told CNN. Asked if he held Trump himself responsible for that, Schmidt said: “People should be mindful that there are bad actors who are lying to them.”

During a break from even more pressing electoral business, his team checked allegations of dead people voting. “We looked it up,” Schmidt said. “Not a single one of them voted in Philadelphia after they died.”

Trump is also making unsupported claims of unfairness in five states, repeating allegations even when they’ve been firmly debunked. This as his supporters hail race calls by the media when those calls go their way and denounce calls as illegitimate when they don’t.

Not everyone in officialdom shares the timidity of GOP lawmakers when it comes to standing up to Trump.

The Homeland Security Department’s Cybersecurity and Infrastructure Security Agency has slapped down rumor after unfounded rumor about voting malfeasance and joined with state election officials in a statement declaring the election to have been the “most secure in American history.”

By secure, they meant there was no evidence that any voting system deleted or lost votes, changed votes “or was in any way compromised.” That was a clear repudiation of Trump’s unfounded accusations.

States have until Dec. 14 to finish the counting and certify the results. That’s also the day Electoral College delegations are to meet in their respective states to cast and tally electoral votes, with a joint session of Congress set for Jan. 6 to affirm the count and declare the official result. It’s a process thick with pro-forma minutia that Americans rarely need to understand but this time conceivably might.

The U.S. has long promoted the conceit that it is the world’s beacon of democracy. Now, the most essential tool of democracy, the vote, is under attack.

The story of presidential elections the night of, the day after or even weeks of indecision later has been one of candidates swallowing the bitterness of defeat and smoothing the path for the winner. Presidential transitions have unfolded as if by muscle memory. The peaceful transfer of power has never been in question in living memory until now.

Perhaps the closest the U.S. has come to today’s conflict was the presidential election of 1876, when Samuel Tilden, the Democrat, appeared to win, only to have Rutherford B. Hayes, the Republican, ultimately declared the winner after cutting a deal to secure electoral votes in three Southern states in exchange for effectively ending Reconstruction.

That election, unlike this one, did not involve an incumbent trying to cling to power. Nor did others that loom large in more recent history.

In 1960, Democrat John F. Kennedy defeated Republican Richard Nixon by only about 112,000 votes out of more than 68 million cast, though Kennedy held a decided advantage in the Electoral College. Nixon felt cheated and considered challenging the outcome but declined, conceding the morning after the election.

Al Gore, the Democratic nominee in 2000, won the popular vote by about 540,000 votes out of 100 million cast. But he conceded twice — at first prematurely on election night, then again weeks later when a decision by the Supreme Court handed Florida, and an Electoral College majority, 271-266, to Republican George W. Bush.

Bush had turned to the high court with a legal case based not on fraud but on his claim that voters were denied equal protection because Florida did not have proper standards for recounts.

In 2016, Trump won Wisconsin, Michigan and Pennsylvania by a combined 77,000 votes; Democrat Hillary Clinton called him on election night and publicly conceded the next day. Her advantage in the popular vote of nearly 3 million has animated the grievances of her supporters to this day, but the Electoral College arithmetic was inexorable and not to be challenged.

Obama then welcomed Trump to the White House in a display to the world of the rituals of an American democratic transition.

In 2008, Obama had been the beneficiary of similar graciousness. That’s when Republican rival John McCain conceded before a crowd of supporters, converting their boos at the mention of Obama’s name to cheers and applause for the Democrat, for the process and for the historic achievement of the first Black American to win the presidency.

“I wish Godspeed to the man who was my former opponent and will be my president,” McCain said.