Throughout, the urgent question of whether former national security adviser John Bolton will be allowed to testify remained at the forefront. Democrats argued that Bolton must be allowed to speak to ensure a fair trial, while Republicans said Democrats should have demanded earlier that Bolton and other witnesses testify.

Meanwhile, the actions of former Vice President Joe Biden and his son, Hunter, a former executive at a Ukraine energy company, drew continued attention from Republicans amid claims by Democrats that the younger Biden was irrelevant and "a distraction.”

Highlights of Wednesday's session and what's ahead as senators conduct just the third impeachment trial of a president:

Republicans strained to contain the fallout over Bolton's forthcoming book, which threatens their hopes of ending the trial with a quick acquittal.

Bolton writes in the book that Trump told him he wanted to withhold military aid from Ukraine until it helped with investigations into Biden, a top Trump rival in the 2020 election. If true, Bolton's assertion undercuts a key defense argument and goes to the heart of one of the two articles of impeachment against the president, abuse of power.

“There's no way to have a fair trial without witnesses," said Rep. Adam Schiff, chairman of the House Intelligence Committee and the lead Democratic prosecutor.

A handful of Republicans signaled an interest in calling Bolton or other witnesses. “I think Bolton probably has something to offer us," said Sen. Lisa Murkowski, R-Alaska, who met privately Wednesday with Senate Majority Leader Mitch McConnell.

Murkowski, Maine's Susan Collins and Utah's Sen. Mitt Romney are the Republican senators who have seemed the most open to calling new witnesses. With the Senate split 53-47 in favor of Republicans, at least four GOP senators must join all Democrats to reach the 51 votes required to issue subpoenas.

RELATED: McConnell says he doesn't have votes yet to block new witnesses

Before the Senate session even began, Trump repeatedly attacked Bolton on Twitter, saying he fired the hawkish Bolton last fall "because frankly, if I listened to him, we would be in World War Six by now.''

Trump also complained that after he left the White House — Bolton says he resigned — the longtime GOP aide “goes out and IMMEDIATELY writes a nasty & untrue book'' that includes classified information.

The White House action could delay the book's publication if Bolton is forced to revise his draft.

In the trial's eighth full day, senators finally stood to speak, if only to announce questions that were read aloud by Chief Justice John Roberts. The questions ignited an hours-long debate, with many inquiries focused not so subtly on helping one side or the other clarify arguments made in six days of presentations by House prosecutors and Trump's defense.

Senate Democratic Leader Chuck Schumer said he and other Democrats directed so many questions to the House prosecutors "because they needed the chance to rebut the false arguments, fallacious reasoning, half-truths and even no-truths that the three days the president's counsel made. And this was their first chance to do it.'' 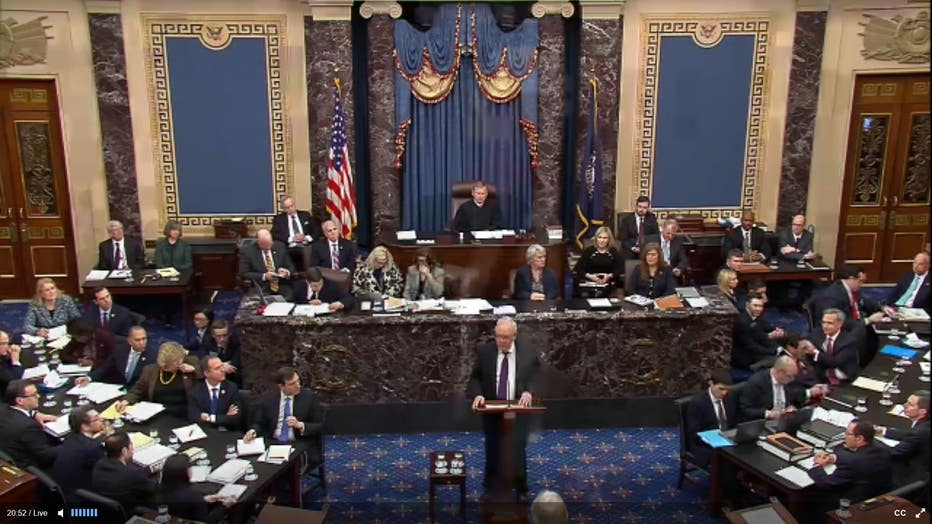 In this screengrab taken from a Senate Television webcast, Legal Counsel for President Donald Trump Ken Starr speaks during impeachment proceedings against Trump in the Senate at the U.S. Capitol on Jan. 27, 2020 in Washington, D.C. (Photo by Senate

"No matter what we do in the next several days the Democrats will say this process wasn’t everything it should’ve been, because we’re in the majority and they’re not,” Blunt said.

Asked if completing an impeachment trial without new witnesses would be a bad look for the Senate, Blunt said, “It’s for sure bad for democracy that the House didn’t do their job.” Still, Blunt said senators from both sides were paying attention and said the Senate “looked at everything the House sent over” on impeachment.

McConnell privately told senators this week that he doesn't yet have the votes to block Democratic demands for witnesses now that the Bolton revelations have roiled the trial.

Party leaders have warned GOP senators that calling Bolton as a witness could entangle the trial in lengthy legal battles and delay Trump's expected acquittal.

White House lawyer Patrick Philbin made that point in responding to Democrats' first question. “This institution will effectively be paralyzed for months on end” if Bolton is called, Philbin said.

Saying it's “very important that there be fairness,'' Collins urged that each side be able to select one or two witnesses, presumably including Bolton and Hunter Biden.

One Democrat, Sen. Joe Manchin of West Virginia, said he was open to hearing from the younger Biden, but Schumer and other Democrats dismissed the idea.

"The four witnesses we have suggested are eyewitness to what happened. Hunter Biden is irrelevant and a distraction,'' Schumer said.

Trump and McConnell could call for Hunter Biden right now, Schumer added: "They don't want to. They know it would turn things into a circus.''

In a sign the circus may already have arrived, a huge media throng watched as Lev Parnas, the indicted associate of Trump lawyer Rudy Giuliani, showed up at the Capitol saying, “I want to testify." Parnas, who has turned over evidence for the proceedings, cannot enter the Senate with his court-ordered electronic-tracking device.

Lawyer Joseph Bondy said his client, Parnas, would watch the proceedings from a “safe location.''

Meanwhile, protesters swarmed the Capitol complex throughout the day, many demanding a fair trial. “No cover-up! We want witnesses!” the protesters chanted outside the Capitol.

Senators will continue questions Thursday, with crucial votes on witnesses expected as soon as Friday.