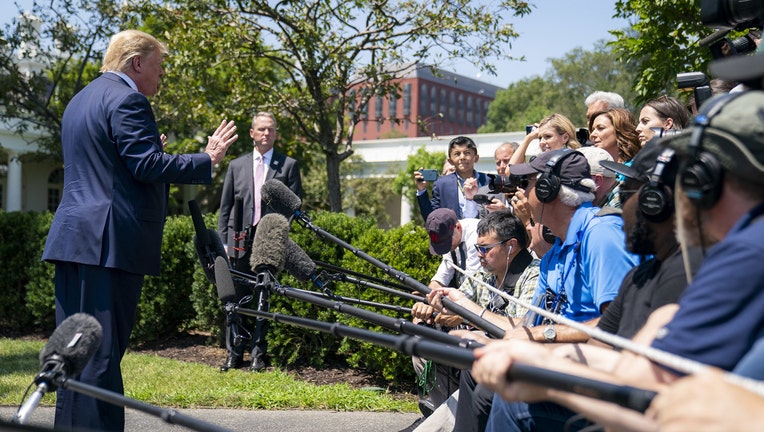 President Donald J. Trump talks to members of the press on the South Lawn of the White House Tuesday, July 30, 2019, following his trip to Williamsburg, Va. (Official White House Photo by Tia Dufour)

WASHINGTON - The Trump administration said Wednesday it will set up a system to allow Americans to legally import lower-cost prescription drugs from Canada, weakening a longstanding ban that had stood as a top priority for the politically powerful pharmaceutical industry.

Health and Human Services Secretary Alex Azar made the announcement Wednesday morning. Previous administrations had sided with the industry on importation, echoing its concerns that it could expose patients to risks from counterfeit or substandard medications.

Azar, a former drug industry executive, said U.S. patients will be able to import medications safely and effectively, with oversight from the Food and Drug Administration. The administration's proposal would allow states, wholesalers and pharmacists to get FDA approval to import certain medications that are also available here.

It's unclear how soon consumers will see results.

Most patients take affordable generic drugs to manage conditions such as high blood pressure or elevated blood sugars. But polls show concern about the prices of breakthrough medications for intractable illnesses like cancer or hepatitis C infection, whose costs can run to $100,000 or more. And long-available drugs like insulin have also seen price increases that have forced some people with diabetes to ration their own doses.

"For too long American patients have been paying exorbitantly high prices for prescription drugs that are made available to other countries at lower prices," Azar said in a statement that credited President Donald Trump for pushing the idea.

The administration's move comes as the industry is facing a crescendo of consumer complaints over prices, as well as legislation from both parties in Congress to rein in costs.

Trump is supporting a Senate bill to cap medication costs for Medicare recipients and require drugmakers to pay rebates to the program if price hikes exceed inflation. Democrats in the House are pressing for a vote on a bill allowing Medicare to directly negotiate prices on behalf of millions of seniors enrolled in its prescription drug plan. Separately, the Trump administration is pursuing a regulation that would tie what Medicare pays for drugs administered in doctors' offices to lower international prices.

The importation idea won praise from a key lawmaker, Sen. Chuck Grassley, R-Iowa, chairman of the panel that oversees Medicare. Grassley said on Twitter that importation would lower prescription drug costs, and all drugs from abroad must be verified as safe by the FDA. He and Democratic presidential candidate Sen. Amy Klobuchar of Minnesota have a bill to facilitate importation.

Eyeing his reelection campaign, Trump has made lowering prescription drug prices one of his top goals. As a candidate, he called for allowing Americans to import prescription drugs, and recently he's backed a Florida law allowing state residents to gain access to medications from Canada

Drug prices are lower in other economically advanced countries because governments take a leading role in setting prices. But in the U.S., Medicare is not permitted to negotiate with drug companies.

Some experts have been skeptical of allowing imports from Canada, partly from concerns about whether Canadian suppliers have the capacity to meet the demands of the much larger U.S. market.

But consumer groups have strongly backed the idea, arguing that it will pressure U.S. drugmakers to reduce their prices. They also point out that the pharmaceutical industry is a global business and many of the ingredients in medications sold in the U.S. are manufactured abroad.

AARP had pushed hard for the Florida plan, saying it's possible to safely import lower-priced, equally effective drugs and it would promote worldwide price competition.

The drug industry lobby, Pharmaceutical Research and Manufacturers of America, has successfully blocked past efforts in Washington to allow importation. It argues that patients would be at risk of receiving counterfeit or adulterated medications.