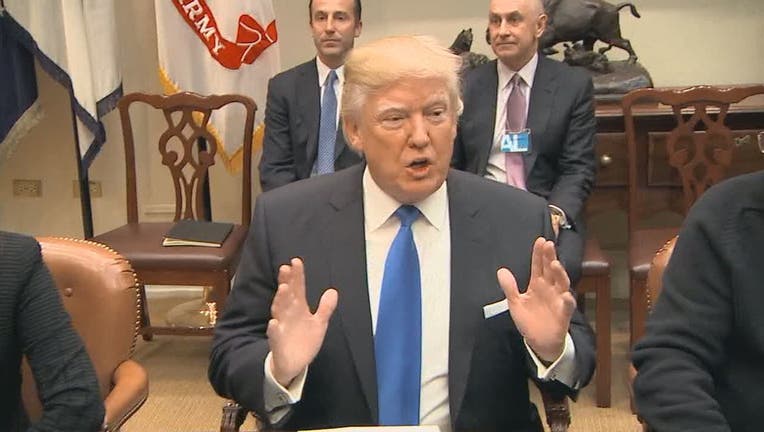 Obama had personally halted the Keystone XL project, which was to bring oil from Canada to the U.S., and major protest demonstrations have frozen work on the Dakota pipeline.

Trump, in his continuing effort to undo the past eight years of a Democratic president, invited the Keystone builder, TransCanada, to resubmit its application to the State Department for a presidential permit to construct and operate the pipeline. The company said it would reapply.

Obama halted the proposed pipeline in late 2015, declaring it would undercut U.S. efforts to clinch a global climate change deal that was a centerpiece of his environmental agenda.

Trump also ordered the U.S. Army Corps of Engineers to quickly review and approve construction and easement requests for the Dakota Access pipeline, a project that has led to major protests by American Indian groups and their supporters.

"From now on we are going to start making pipelines in the United States," Trump said from the Oval Office, where he also vowed to require the actual pipe for Keystone to be manufactured in America.

Trump's actions four days after he took office came on the heels of his decision to withdraw from a major trade agreement as he upends Obama's policies, winning praise from congressional Republicans. Democrats in energy-producing state also hailed Trump's actions on the pipelines as long-awaited steps to boost jobs and move the country toward energy independence.

But environmental groups and Native American tribes who have fought both projects for years pledged to defy Trump.

"President Trump will live to regret his actions today," said Michael Brune, executive director of the Sierra Club. "Unwittingly he is beginning to build a wall -- a wall of resistance. This fight is far from over."

The 1,179-mile Keystone XL pipeline would run from Canada to Nebraska, where it would join other lines already leading to refineries along the Gulf Coast.

State Department approval is needed because the pipeline would cross the northern U.S border.

As a practical matter, the Dakota Access project is likely to be completed first. The company building it says it is complete except for a section that would pass under the Missouri River near a camp in North Dakota where pipeline opponents are demonstrating.

The 1,200-mile pipeline would carry North Dakota oil through South Dakota and Iowa to an existing pipeline in Illinois. The proposed route skirts the Standing Rock Sioux tribe's reservation and crosses under Lake Oahe, a Missouri River reservoir in North Dakota that serves as the tribe's drinking water source.

The tribe's chairman accused Trump of breaking the law, citing treaty rights with the United States, and promised to fight the action in court.

"Americans know this pipeline was unfairly rerouted toward our nation and without our consent," Dave Archambault said.

The Army decided last year to explore alternate routes for the Dakota pipeline after the tribe and its supporters said it threatened drinking water and Native American cultural sites. The company developing the pipeline, Texas-based Energy Transfer Partners, says it will be safe.

"Today's news is a breath of fresh air, and proof that President Trump won't let radical special-interest groups stand in the way of doing what's best for American workers," said Sen. John Cornyn of Texas, the second-ranking Republican in the Senate.

In July, the Army Corps of Engineers granted the company needed permits, but in September the agency said further analysis was needed. On Dec. 4, the assistant Army secretary for civil works, Jo-Ellen Darcy, said alternate routes needed to be considered.

About 600 pipeline opponents have been arrested in North Dakota since last year. An encampment on Corps land along the pipeline route that once hosted thousands of protesters has dwindled to fewer than 300 after the Tribal Council recently urged people to leave due to harsh winter weather. Much of the camp is buried in two feet of snow and many of the teepee tarps have been taken down, leaving only the frames. Law enforcement continues a presence on nearby bluffs.

Trump's action could re-ignite large-scale protests, said Dallas Goldtooth of the Indigenous Environmental Network, one of the main camp organizers.

"Standing Rock has ignited a fire in all of us," Goldtooth said. "We hope to see those fires continue to burn."

Trump hailed the Keystone project during a late October campaign swing through Florida, saying, "We're going to approve energy infrastructure projects like the Keystone pipeline and many more." He said it could provide "a lot of jobs, a lot of good things."

Until last year, Trump owned a small amount of stock in Energy Transfer Partners and at least $100,000 in Phillips 66, an energy company that owns one-quarter of the Dakota pipeline. Trump sold the shares last year as part of a wide-ranging stock divestment, a spokesman said.

Environmental groups blasted Tuesday's order as a bid by Trump to serve the oil industry. Trump's nominee for secretary of state, Rex Tillerson, is a former Exxon Mobil CEO, and his pick for energy secretary, former Texas Gov. Rick Perry, owns stock in Energy Transfers and served on its board until his nomination for the energy post.

"Donald Trump is a con man and this is a con on a massive scale," said Bill McKibben, co-founder of the environmental group 350.org.