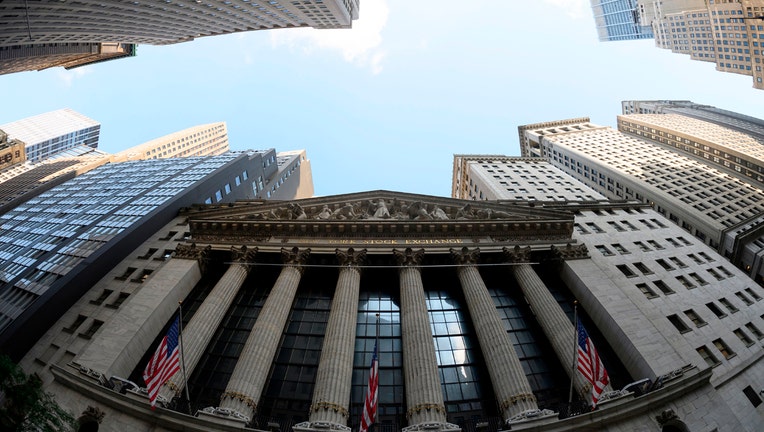 The surge in tech stocks followed a decision by the U.S. to give Chinese telecom giant Huawei another 90 days to buy equipment from American suppliers. Chipmakers including Qualcomm, Intel and Micron, all rose.

The decision to give Huawei more time to buy goods from U.S. companies appeared to put investors eager for any signs of progress in the trade war between the U.S. and China in a buying mood.

"Today is an up day because we have some better news on China," said Kate Warne, chief investment strategist at Edward Jones. "There's likely to be many of these 1% higher, 1% lower days, as investors search for a longer-term direction. And that's what we don't have yet."

Despite their recent gains, U.S. stock indexes are on track to finish the month with losses. The market has been highly volatile all month as investors try to parse conflicting signals on the U.S. economy and determine whether a recession is on the horizon. A key concern is that the escalating and costly trade conflict between the world's two biggest economies will hamper growth around the globe.

Last week, many stock indexes around the world struck their lowest levels this year, before a late rally suggested some calm was returning to the markets in what is a traditionally low-volume time of the year. Analysts say the concerns that drove last week's sell-off could resurface at any time.

"Investors just need to be prepared for a lot swings up and down as markets move," Warne said.

The market's moves on Monday suggested investors' anxiety took a back seat to optimism over the U.S.'s decision on Huawei, at least for a day.

This could be seen in the bond market, where yields rose. That's a reversal from much of August, when yields mostly fell as investors sought out the safety of government bonds as the U.S.-China conflict escalated. On Monday, the yield on the 10-year Treasury note climbed to 1.61% from 1.54% late Friday.

Investors are weighing how much of an impact the trade conflict between Washington and Beijing will have on global economies, some of which are already showing signs of slowing.

Earlier this month, Trump announced plans to extend tariffs across virtually all Chinese imports, many of them consumer products that were exempt from early rounds of tariffs. The tariffs have been delayed, but ultimately will raise costs for U.S. companies bringing goods in from China.

Huawei has become part of the trade war, with the White House showing a willingness to use sanctions against the company as a bargaining chip. The U.S. government blacklisted Huawei in May, deeming it a national security risk, meaning U.S. firms aren't allowed to sell the company technology without government approval.

Apple rose 1.9% on news that CEO Tim Cook met with President Trump over the weekend and discussed how U.S. tariffs on goods imported from China are making it tougher for the iPhone maker to compete with rival Samsung.

Apple has manufacturing facilities in China, while Samsung builds its products mainly in South Korea. "I thought he made a very compelling argument, so I'm thinking about it," Trump told reporters.

This week offers investors a couple of opportunities to gauge the Federal Reserve's willingness to cut interest rates further.

The central bank is releasing the minutes from its last meeting of policymakers Wednesday. Two days later, Fed Chairman Jerome Powell is scheduled to deliver a speech at the central bank's annual conference in Jackson Hole, Wyoming.

Investors are hoping the Fed will continue to cut interest rates to shore up economic growth. The Fed lowered interest rates by a quarter-point at its last meeting. It was the first time it lowered rates in a decade.

In two tweets Monday, President Donald Trump called on the Fed to cut interest rates by at least a full percentage point "over a fairly short period of time," saying that such an action would make the U.S. economy even better and would also "greatly and quickly" enhance the global economy.

Traders will be weighing new data on sales of new U.S. homes Friday and earnings reports from several big retailers this week, including Home Depot, Target and Gap, for any hints about the health of consumer spending.