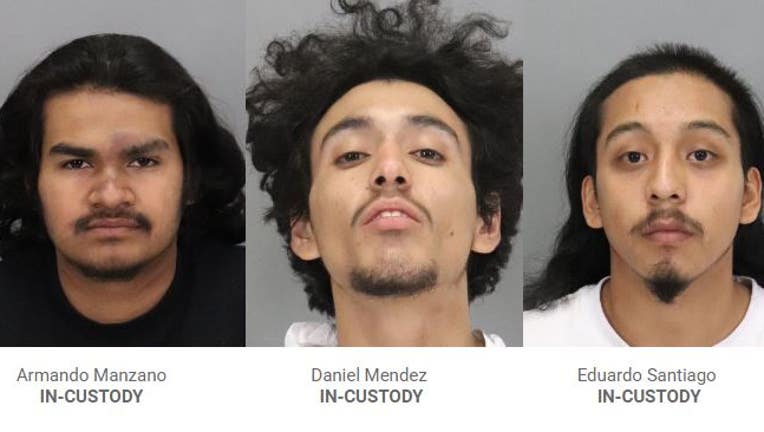 SAN JOSE, Calif. - San Jose police have arrested four suspects following a violent string of home invasions, including occasions where several men bound an elderly couple with belts before stealing their bank cards and jewelry and then continued on to hold a father and toddler at gunpoint.

Police on Thursday said they have arrested three men and a minor for some of these robberies. Booked into custody are: Armando Manzano, 19; Daniel Mendez, 19; Eduardo Santiago, 23; and a 17-year-old who wasn't identified.

Sgt. Christian Camarillo used the arrests as an opportunity to push for higher bail amounts, singling out Manzano, who was arrested on another charge two days prior to the robbery one.

San Jose police have arrested four suspects following a violent string of home invasions, including occasions where several men bound an elderly couple with belts before stealing their bank cards and jewelry and then continued on to hold a father and toddler at gunpoint.

Police said five or six suspects bound an elderly couple with belts, brandished a handgun, and violently assaulted the victims. Then, police said, they stole various personal items, including bank cards, jewelry, and the couple's car before fleeing.

The couple's car was then used shortly afterward at a second home invasion in the 1000 block of Summerdale Drive.

Five suspects held a father and his 15-month-old at gunpoint, police said.

The suspects threatened to shoot the child and kidnapped the father, forcing him to go to his bank, demanding that he withdraw money from his account, police said.

The suspects returned with the father to his home and stole various personal items, including bank cards, and jewelry. The suspects were captured on a dash camera fleeing from the scene by the man's wife as she came home, police said.

The suspects rummaged through the home and attempted to steal various items.

One of the victims was able to contact police during the home invasion.

Responding officers arrested two suspects – Manzano and Mendez – as they fled from the scene.

They were booked into the Santa Clara County Main Jail for felony robbery charges.

During the investigation, detectives identified two additional suspects, Santiago and the teen. Both were arrested after police searched their homes and found stolen property inside.

News of the arrests will likely ease the minds of Berryessa neighbor SandeepPotdar who told KTVU last month that 40 neighborhood residents have joined an online watch group. Many residents have been afraid to let their children play outside.

"It’s disrupted everything. Peace in the neighborhood," said Potdar. "We used to keep our doors open, your windows open. We’ve just kept everything closed. I’ve upgraded some of the locks and security. And it’s just a very scary feeling."

SJPD is asking for the public’s assistance in providing all potential surveillance footage of the suspects, regardless of whether the footage captured a crime in progress. Anyone with information is asked to contact Detective VanBrande of the San José Police Robbery Unit via email: 4542@sanjoseca.gov or 408-277-4166.