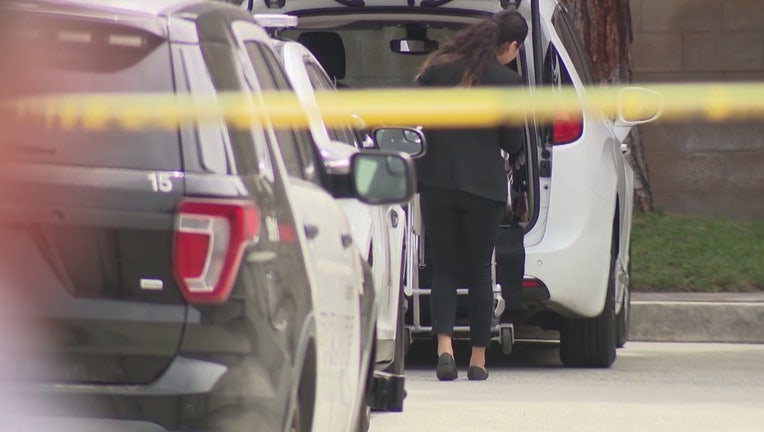 GARDEN GROVE, Calif. - A man is in custody after a series of stabbings left four people dead in Orange County.

The first stabbing happened at an apartment complex on Jentges Ave. Garden Grove around 4 p.m. Police say they received calls of a burglary that just happened at the complex.

About 20 minutes later police got a call of a robbery that just occurred at a bakery on Chapman Ave. in Garden Grove.

Officials say the suspect was seen in a silver Mercedes and was armed with a knife.

Around 5:05 p.m. police got a call of two men down at the apartment complex they were previously at on Jentges Ave. Once on scene officers located a male on the balcony suffering from multiple stab wounds, he died on scene. A second victim was taken to the hospital where he later died.

At 5:40 p.m. officers responded to a robbery in progress call at a Cash and More store on Harbor St. They say the same suspect in the previous robbery was involved. No one was injured during the robbery.

A few minutes later, officers got another call of a robbery in progress at an insurance business on Harbor and Garden Grove Blvd. A female employee was stabbed multiple times; the suspect then fled the area with cash in hand. The victim was taken to the hospital, police say she is expected to survive.

Around 6:09 p.m. officers responded to the Chevron gas station on 13321 Harbor Blvd, after reports of a stabbing. Police say a man was pumping gas when the suspect approached him and stabbed him several times. Witnesses say the suspect had multiple knives or a machete. The victim had lacerations to his face and back, police say he nearly had his nose severed; he was taken to the hospital and is expected to survive.

About 6:15 p.m., the suspect fatally stabbed someone inside a Subway restaurant on the 3800 block of First Street in Santa Ana before
going to a 7-Eleven across the street, where he stabbed a security guard. Lt. Carl Whitney with the Garden Grove Police Department says the suspect disarmed the security guard by cutting his gun and holster from his belt and taking the firearm. The guard was taken to the hospital where he later died.

According to police around 6:25 p.m. undercover officers located the suspect’s vehicle at a 7/11 store near First and Harbor Blvd. and called for back-up from Santa Ana Police. The suspect came out of the store armed with a knife and a handgun and was taken into custody by the plainclothes officers.

Police said the suspect had no apparent connection to any of the victims. They add that there is no longer a threat to the public, but they are still investigating multiple crime scenes. According to officers all four people killed in tonight's stabbing spree in Garden Grove and Santa Ana were male Hispanics.