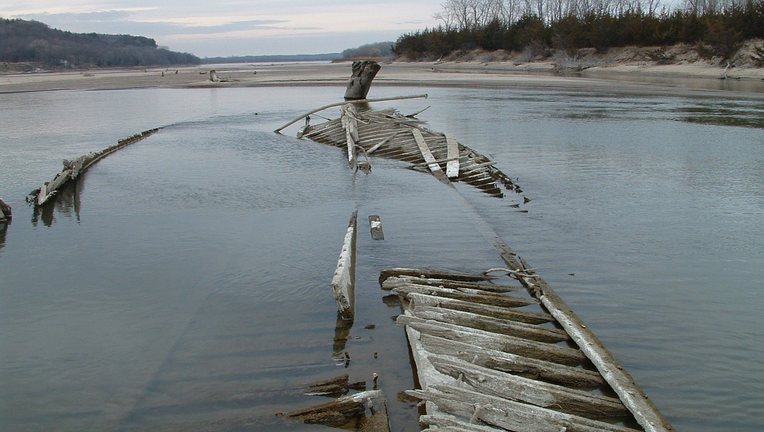 A steamboat that sunk in the Missouri River in 1870 has been exposed again after a recent drought in South Dakota.

The Missouri National Recreation Center posted on its Facebook that the vessel, North Alabama, sank after she hit a snag and ended up at the bottom of the "Mighty Mo."

A posted picture showed the remains, including broken wooden beams.

It was first uncovered in 1904 when water levels dropped and again in 2004.

RELATED: Man survives after being stung thousands of times in bee attack

According to a 2013 YouTube video, the North Alabama was a 220-ton wooden packet steamboat. It was headed from Sioux City, Iowa, to Yellowstone County in Montana to deliver supplies such as flour and whiskey to miners in the Rocky Mountains in Montana.

Officials said the steamboat was trying to make its way from the South Dakota shoreline to the Nebraska shoreline to pick up more wood for the voyage.

But then the captain felt the ship hit a snag as the vessel approached Nebraska, creating a hole in the bottom of the boat that was about 2 feet wide and 8 feet long.

Cargo valued at more than $12,000 (estimated to be more than $300,000 today) went down with the ship with no insurance to help cover the financial losses.

"Who knows when the North Alabama will appear again?" officials asked in the 2013 video.