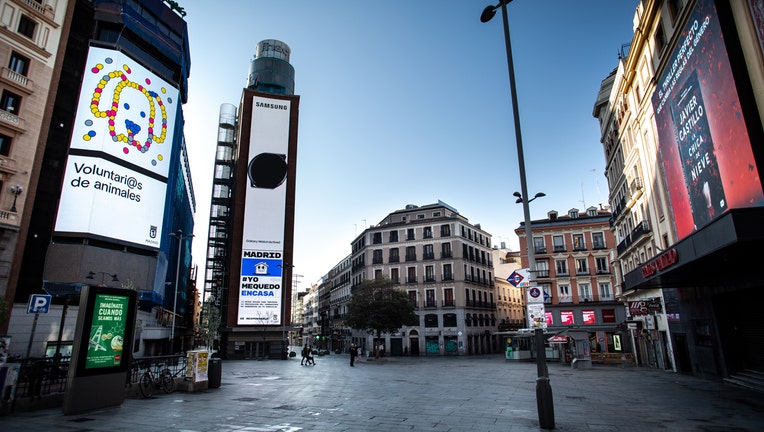 A deserted Callao Square a day after the Government declared the state of alarm in Spain and recommended people to stay at home to fight coronavirus COVID-19 on March 14, 2020 in Madrid, Spain. (Photo by Pablo Cuadra/Getty Images)

MADRID, Spain - Spain is set to announce an Italian-style countrywide lockdown Saturday after a dramatic spike in coronavirus cases.

Ahead of the announcement, airplanes on their way to the Iberian Peninsula dramatically turned around midair.

Low-cost airline Jet2, which is based at nine airports in the United Kingdom, halted all fights with immediate effect to mainland Spain after the country saw cases rise by more than 1,500 to more than 5,700.

“In response to local measures introduced throughout Spain to prevent the spread of COVID-19, including the closure of bars, restaurants, shops, and activities including any water sports, we have taken the decision to cancel all flights to Mainland Spain, the Balearic Islands, and the Canary Islands with immediate effect,” the airline said in a statement.

This move forced flights already on their way to Spain to turn back midflight, according to Sky News.

“We know these local measures will have a significant impact on our customers’ holidays, which is why we have taken this decision,” the airline’s statement continued, adding: “The health and safety of our customers is our number one priority, and we would like to thank our customers for understanding.”

The decision by Jet2 Airline comes as the World Health Organization (WHO) declared Europe to be the new epicenter of the coronavirus epidemic after seeing “more reported cases and deaths than the rest of (the) world combined apart from China.”

“More cases are now being reported every day than were reported in China at the height of its epidemic,” WHO director-general Tedros Adhanom Ghebreyesus said Friday night.

In Europe, the hardest-hit country is Italy, with more than 1,000 deaths and more than 17,600 infections overall.

Spain is the second most-affected European country and has seen more than 132 deaths. Health officials said Saturday coronavirus infections have reached 5,753 people, of which almost 3,000 are in the capital of Madrid.

That represents a national increase of more than 1,500 in 24 hours.

Spanish Prime Minister Pedro Sanchez is expected to declare a state of emergency on Saturday, effectively locking down the country in an effort to contain the outbreak. The lockdown will reportedly start Monday at 8 a.m. local time, local media reported.

Residents in Madrid and northeast Catalonia woke up Saturday to shuttered bars and restaurants while other nonessential commercial outlets were closed by regional authorities.

The Madrid government told Spaniards to stay home except to buy food or medicine, go to the hospital, go to work or other emergencies, according to a draft decree seen by Reuters.

According to El Pais, the new decree draft stated that "the head of the Interior Ministry will be able to impose the closure of freeways or sections of the same for reasons of public health, safety or movement of traffic, or the restriction of determined vehicles to them for the same seasons."

Sanchez is expected to roll out the restrictions throughout Saturday.

A state of emergency allows the central government to limit free movement, legally confiscate goods and take over control of industries and private facilities, including private hospitals. It's only the second time that the government has evoked it since the return of democracy in the late 1970s. The other was declared during a 2010 air traffic controllers' strike.

Earlier this week, President Donald Trump announced that travel from Europe would be restricted for 30 days – although the U.K. and Ireland are not included.

The Department of Homeland security clarified that it affects most foreign nationals who were in Europe’s passport-free “Schengen Area” within 14 days prior to traveling to the U.S.

On Friday, Trump declared a national emergency for the U.S.

Fox News' Adam Shaw and the Associated Press contributed to this report.