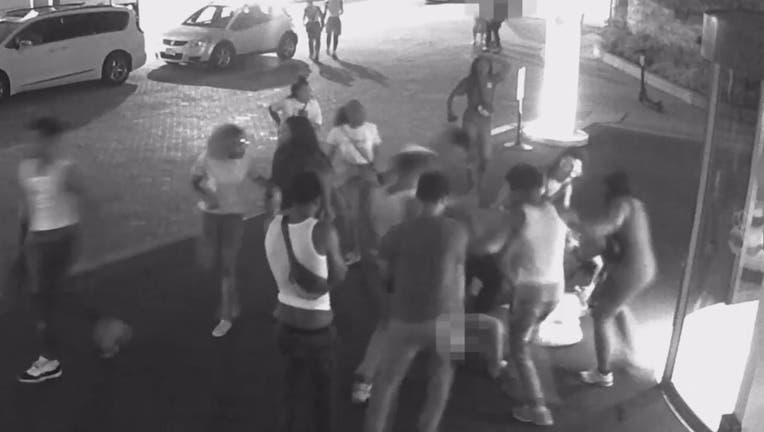 WASHINGTON - D.C. police have made one arrest in connection with a brutal gang assault outside of a Dupont Circle hotel that was caught on surveillance video.

Officers say the incident happened around 1 a.m. on Sunday, July 14 outside of the Hilton Washington along the 1900 block of Connecticut Avenue.

Video of the incident shows two men being surrounded while walking toward the doors of the hotel. One of the victims was able to get inside of the lobby while the other victim was punched and pushed to the ground after being swarmed by several of the attackers.

The victims’ injuries were not life threatening.

On Friday, police arrested a 17-year-old, charging him with aggravated assault.

Police are still looking for at least a dozen additional suspects in the attack.

Brutal Dupont Circle attack caught on camera involved over a dozen teens, some as young as 13-years-old, DC police say

Authorities are looking for more than a dozen juveniles who they say brutally attacked two men earlier this month in Dupont Circle as they walked into a hotel. Officers say the incident happened around 1 a.m. on Sunday, July 14 outside of the Hilton Washington along the 1900 block of Connecticut Avenue.