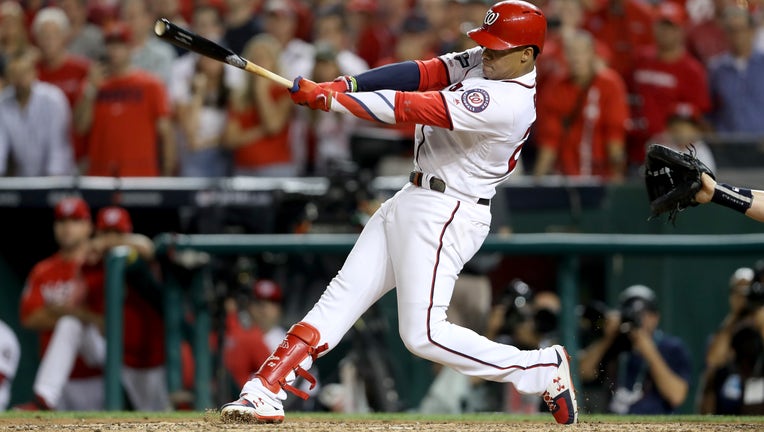 WASHINGTON, DC - OCTOBER 01: Juan Soto #22 of the Washington Nationals hits a single to right field to score 3 runs off of an error by Trent Grisham #2 of the Milwaukee Brewers during the eighth inning in the National League Wild Card game at Nationa

WASHINGTON (AP) - Washington's Juan Soto delivered a bases-loaded single against Josh Hader that scored three runs with two outs in the bottom of the eighth inning, and the Nationals rallied to beat the Milwaukee Brewers 4-3 in the NL wild-card game Tuesday night.

After Hader loaded the bases by hitting one batter, walking another and allowing a bloop single, Soto took a 96 mph fastball to right, and the ball skipped under outfielder Trent Grisham's glove. That error allowed one of the runs to cross the plate.

Stephen Strasburg threw three scoreless innings to earn the win in the first relief appearance of his major league career, regular season or playoffs. Daniel Hudson pitched the ninth for the save.

The Nationals, so familiar with playoff heartache, advanced to face the NL West champion Dodgers in the best-of-five Division Series. Game 1 is Thursday in Los Angeles.

The Washington Nationals rallied to beat the Milwaukee Brewers 4-3 in the NL wild-card game Tuesday night.