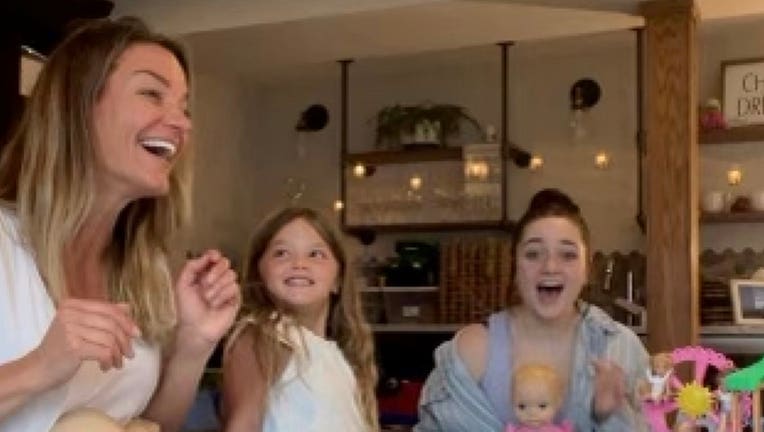 Babysitter Delaney Wilson (right) went viral after her boss, Nicki Maher (left) posted a video of Wilson singing the Disney song "Part of Your World" on her TikTok page. (Courtesy of Nicki Maher)

This babysitter is a real-life Disney princess.

Nicki Maher, 43, from Somerset, Massachusetts, secretly filmed her babysitter, Delaney Wilson, singing a song from the Disney movie "The Little Mermaid," and the clip has gone viral since it was posted last month.

The video – viewed more than 11.8 million times – begins with Maher whispering to the camera: "This is our babysitter." In the background, 18-year-old Wilson can be heard singing the song, "Part of Your World."

The clip then cuts to Wilson singing while playing with Barbie dolls with Maher’s daughter.

Maher told FOX News that even before she secretly filmed Wilson singing, she knew about her babysitter’s beautiful voice.

Over the video, Maher wrote: "I am trying to encourage her to put her voice out there more. But she gets discouraged about the way she looks in her videos. And all I see is beauty. So do my kids. Let’s show her some love so I can get her to sing for us more!!!"

Commenters on the clip were impressed with Wilson’s beautiful voice, with one person saying: "Y’all hired your own Disney Princess!"

Two of Maher’s friends had taught Wilson at the local school and one of those friends gave Maher the heads up that Wilson could sing. Maher also looked at Wilson’s TikTok page and was "super impressed," she told FOX.

What was even more impressive – and touching – to Maher was a video on Wilson’s TikTok profile that showed the moment she found out she was accepted to her dream school, Berklee College of Music.

In the clip, Wilson says to herself: "It’s OK if I don’t, it’s OK." However, when she opens the email, she starts screaming with joy.

"And that made me cry," Maher told FOX. "I was like, I love this type of little story. She seems so sweet. So I knew she was talented. And to get into Berklee is incredible in itself."

Once Wilson started working for Maher, the mom of two asked Wilson why she didn’t post more videos of herself singing on social media.

"That's when she said to me, ‘I just overthink it and I never feel like I sound good enough and I just don't always feel confident in the way I look,’" Maher said. "And it just broke my heart."

Wilson told FOX News that in the last year she received "a lot of negative comments" from people about "what I like to do and my voice and my persona."

"I was definitely holding myself back after a really hard year," Wilson told FOX News.

Maher captured the video of Wilson singing while she was playing with Maher’s daughter.

Wilson told FOX News she had "no idea" Maher was recording her until later, when Maher showed Wilson the clip.

In that moment, Maher said, Wilson was able to see herself "through a different lens."

"It's not that she didn't know she had a talent that so many people have already told her she had," Maher said. "It's that she didn't hear it without knowing she was trying or that someone was watching. So that's why the video was so beautiful."

Wilson added: "For me, it was like, wow, like I perform so differently when I don’t know a camera is pointing at me."

Maher said that Wilson gave her permission to post the clip on her TikTok account and it quickly took off.

"I knew it was going to be nice commentary behind it and cheers, but I didn't know it would be to that degree," Maher said.

"It's been absolutely crazy," Wilson added. "I've gotten so many amazing, like, opportunities and just, I've met so many amazing people that have reached out and been so kind to me. So it's really helped my confidence and it makes me super happy to know that people do want to hear my voice."

As the person who helped spur on some of those opportunities by posting the video, Maher said she’s glad for the moments when social media brings positive outcomes.

"I love the power of social media," Maher said. "I always say that if we want to use it for good, we can. There is a very good side to it. And a lot of wonderful things are happening if we choose to focus on those things. So this is one of them."