A dangerous severe weather outbreak is underway Tuesday evening in parts of the South, where numerous strong, long-track tornadoes, destructive hail, damaging winds and flash flooding will all be serious threats into the overnight hours.

Dozens of Tornado Warnings have been issued as supercells energize and roll through the region.

A storm chaser reported observing a large "wedge" tornado along Highway 42 east of Bassfield, Mississippi, with several downed trees and power flashes, according to the National Weather Service in Jackson.

Another tornado struck near Bywy, Mississippi just after 5:15 p.m. Central.

"We’re seeing trees down all throughout that area… homes are seeing severe damage; there was a camper flipped completely on its roof," Sgt. Dillon Cates with the Choctaw County Sheriff’s Office told FOX Weather. "There was a house in the Sherwoood community that the roof was actually lifted off of the house, twisted 180 degrees and dropped back down on the home." 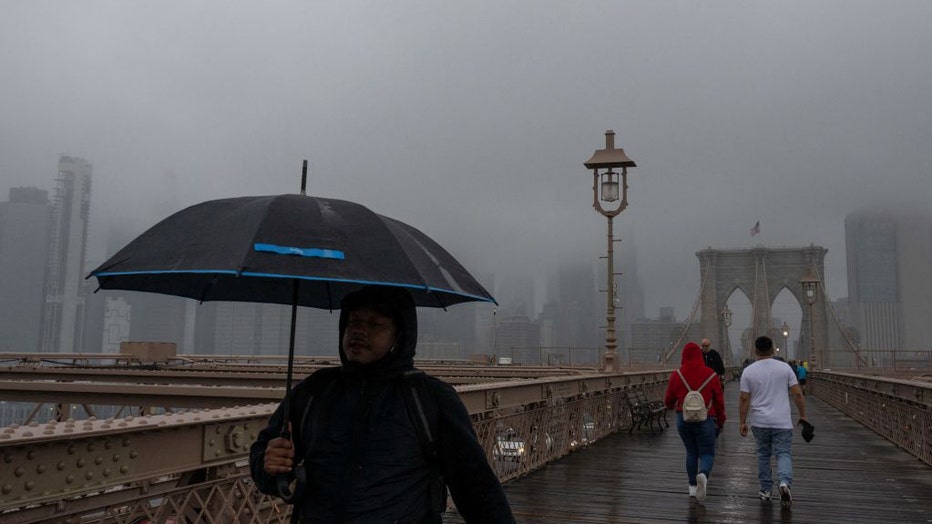 FILE-People carrying umbrellas walk across the Brooklyn Bridge in the rain in New York. (ANGELA WEISS/AFP via Getty Images)

"We had a tornado touch down approximately for about a mile…and probably about a quarter-mile wide," Lawrence County Fire Coordinator Donnie Weeks told FOX Weather. "We had two brick homes that suffered significant roof damage; a couple livestock farms were completely destroyed."

In Louisiana, a tornado reportedly touched down along Highway 126 near Clarks with structural damage reported.

Where are the severe storms now?

The Tornado Watch was also extended into Alabama. Counties in western Alabama, including Tuscaloosa County, will be under a Tornado Watch until 11 p.m. CST.

This is the highest level of Tornado Watch and means the SPC has high confidence that multiple strong (EF-2 to EF-3) or violent (EF-4 to EF-5) tornadoes will occur in the watch area. 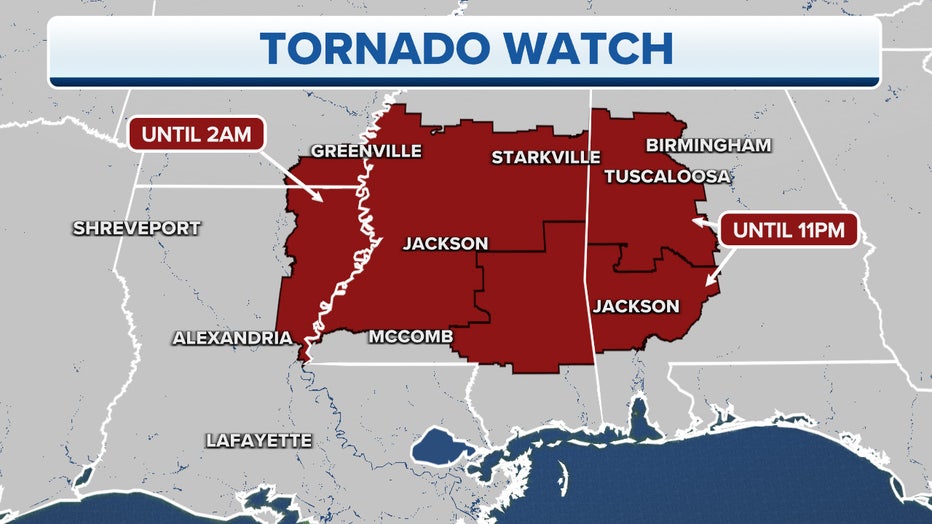 You can see in the three-hour radar loop below where thunderstorms are now developing across the South, some of which have already prompted Severe Thunderstorm and Tornado Warnings.

WHAT IS A ‘PARTICULARLY DANGEROUS SITUATION’ TORNADO WATCH OR WARNING?

Which areas are most at risk of severe storms and tornadoes?

According to the FOX Forecast Center, the lower Mississippi Valley is the potential bull's-eye for a tornado outbreak as a powerful upper-level disturbance punches into the region. This includes portions of northern and central Louisiana, much of Mississippi, southeastern Arkansas, extreme southwestern Tennessee and northwestern Alabama, which is shaded in dark red and magenta on the map below.

Cities included in Tuesday's tornado threat are Greenville, Jackson and Tupelo in Mississippi, Huntsville and Tuscaloosa in Alabama and Monroe in Louisiana. In addition to tornadoes, hail the size of tennis balls or baseballs is also a significant concern in this region.

The overall threat of severe weather will extend from the northern Gulf Coast to the Ohio Valley, where storms could also pack damaging wind gusts, large hail and flooding rainfall. 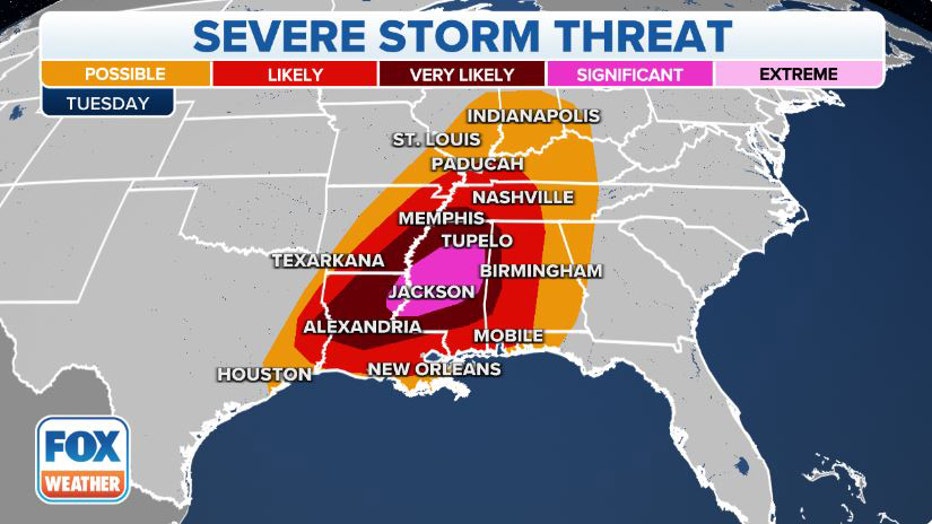 The peak time for strong, potentially long-track tornadoes will likely be from the mid-to-late afternoon through the evening hours, which means many of the twisters could occur after dark since the sun currently sets before 5 p.m. local time. Some tornadoes could be EF-3 or stronger on the Enhanced Fujita Scale.

Severe storms could also spread farther north and east into central and eastern Alabama, northwestern Georgia, Middle and East Tennessee, Kentucky and the Ohio Valley during the overnight hours into early Wednesday morning. The main threat will be damaging wind gusts, but a few tornadoes are also possible in these areas.

"If you live from Baton Rouge (Louisiana) to Jackson (Mississippi) to Huntsville (Alabama) all the way to Nashville (Tennessee) and pushing down to the Southeast, that's the area that we're concerned about for overnight storms," FOX Weather meteorologist Britta Merwin said. "And again, tornadoes are still possible as we go into the overnight hours." 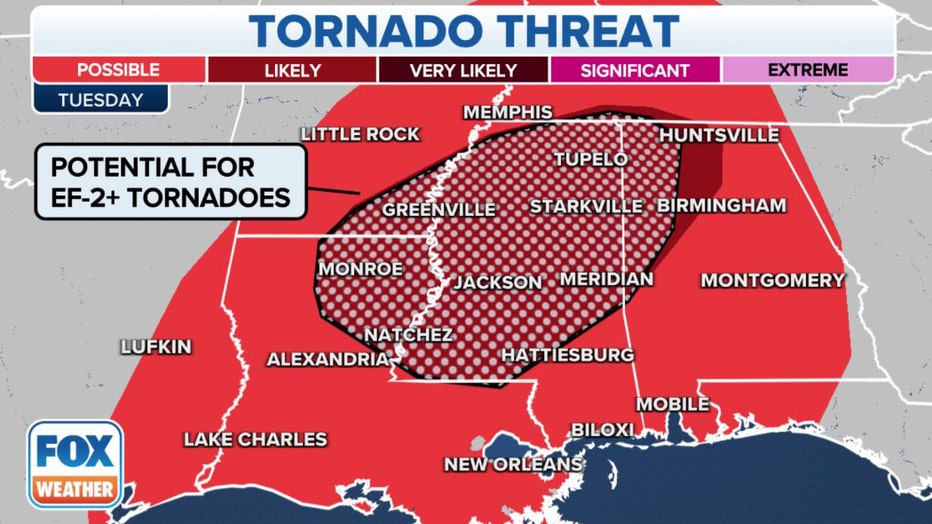 Make sure you have multiple ways to receive potentially life-saving weather alerts issued by the National Weather Service, including one that will wake you up in case a tornado were to threaten your area after you go to bed Tuesday night.

Storms could lead to flash flooding

The storms will also be capable of producing heavy rainfall that may lead to areas of flash flooding, especially where the rain falls too quickly.

Between 1 and 2 inches of rain could soak parts of the Southeast through Wednesday, but localized amounts of up to 3 inches cannot be ruled out in a few spots.

HERE'S WHAT TO DO AFTER YOUR CAR IS FLOODED 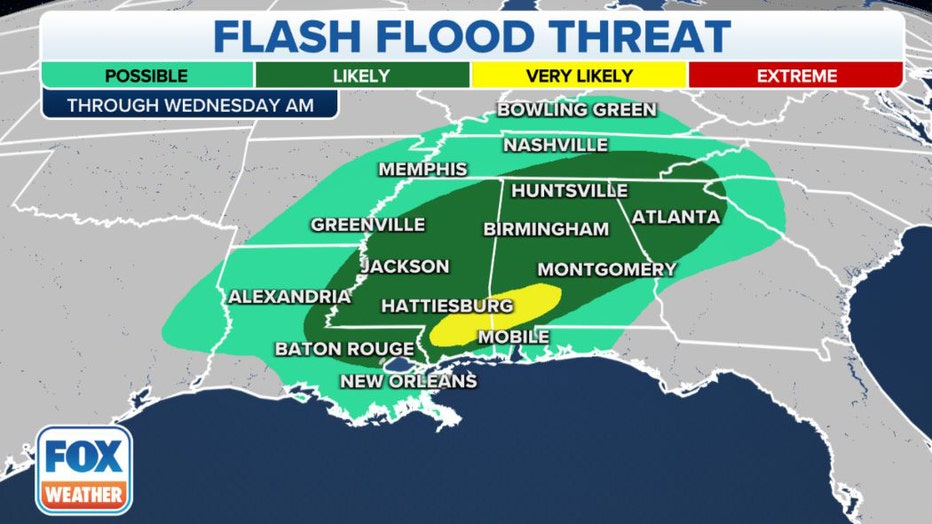 The threat of severe thunderstorms will shift east on Wednesday, but the FOX Forecast Center said the risk of severe weather would be much lower than Tuesday.

Damaging wind gusts are expected to be the primary hazard with any severe storms from the northern Gulf Coast to Georgia. However, an isolated tornado is not ruled out near the Gulf Coast.

HERE'S WHERE TORNADOES ARE MOST LIKELY TO OCCUR IN EACH MONTH 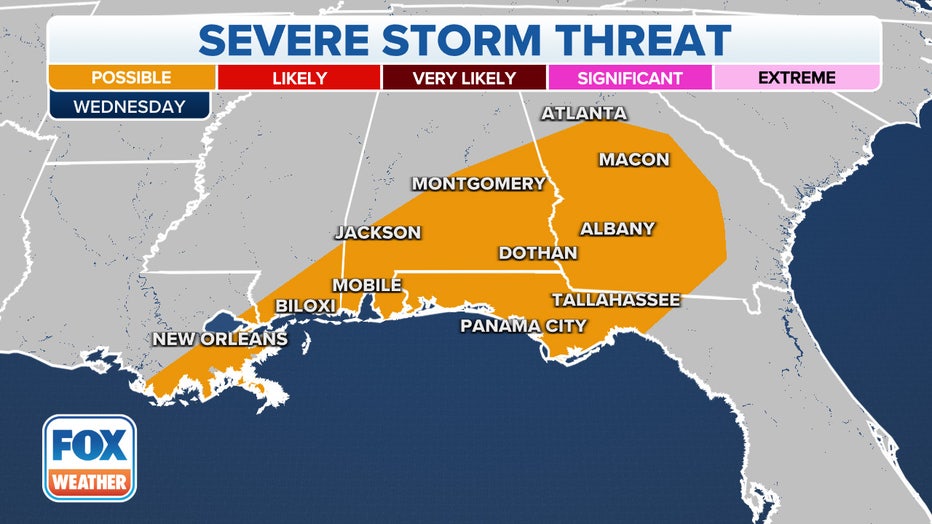 A potent large-scale dip in the jet stream emerged over the central Plains on Tuesday after moving out of the Rockies.

"When the jet stream is right over an area, that provides that upper-level support, so as we go into (Tuesday), that jet stream is setting up right on top of parts of Missouri, Arkansas and Tennessee," Merwin said.

This jet stream dip also spawned an area of surface low pressure over the Upper Midwest, which is bringing accumulating snow to Minneapolis-St. Paul on Tuesday. 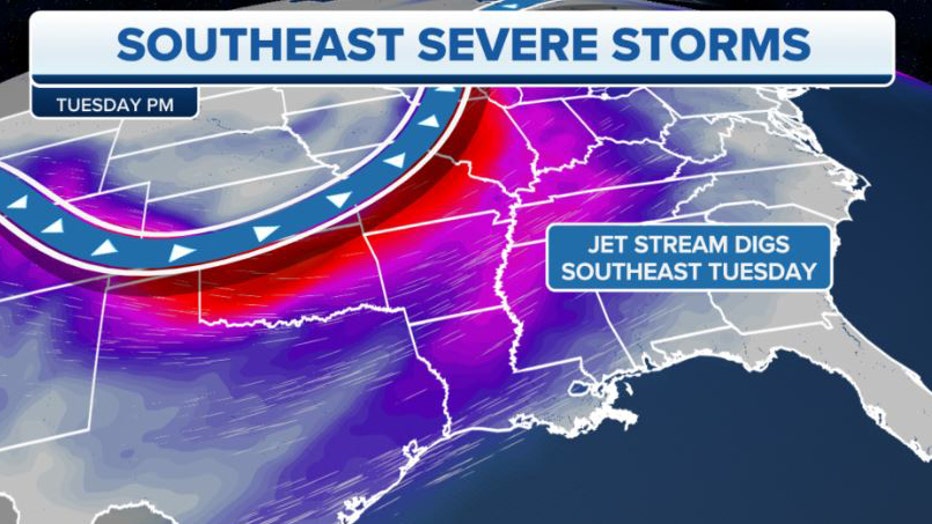 A powerful dip in the jet stream is punching into a warm, humid air mass in the South on Tuesday. (FOX Weather)

Ahead of the jet stream disturbance, an abundant supply of warm, humid air from the Gulf of Mexico is surging into the South and creating an extremely unstable environment to fuel the development of severe storms, including several tornadoes.

"We have a lot of energy, and that also is coming in from the Gulf of Mexico," Merwin explained. "We're talking about mild temperatures, a ton of moisture, and that surge of that energy ahead of this cold front is one of those components that's going to unlock these thunderstorms."

WHICH COUNTRY HAS THE MOST TORNADOES? 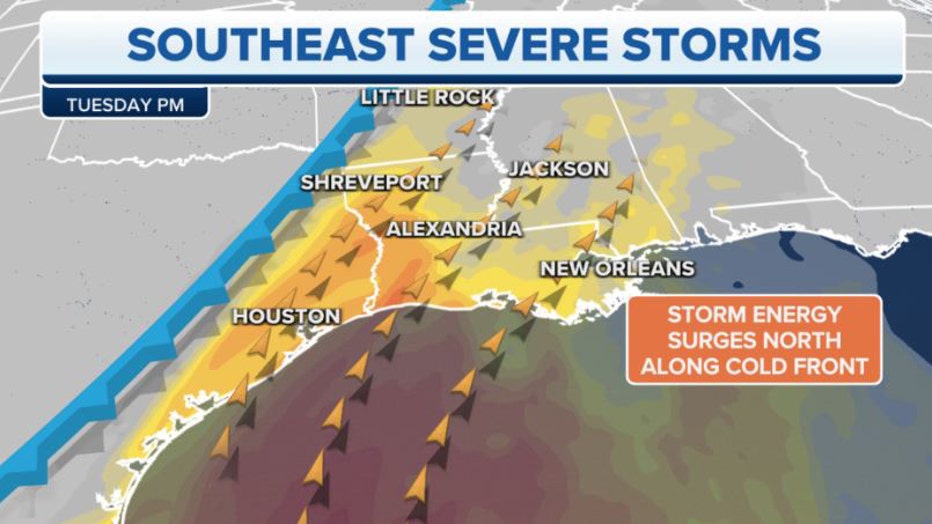 Moisture and energy surging northward from the Gulf of Mexico are fueling the threat of severe storms. (FOX Weather)

The risk for tornadoes on Tuesday is found right where you'd expect it this time of year.

In November, the highest chance of tornadoes based on long-term averages stretches from East Texas into the lower Mississippi Valley and parts of the Southeast.

The U.S. averages 65 tornadoes each November, making it the most active month in the fall severe weather season of October, November and December in the South.

In addition, there's a notable peak in nighttime tornadoes in November, with the month averaging more than 400 twisters in the dark, according to data from NOAA's Storm Prediction Center. 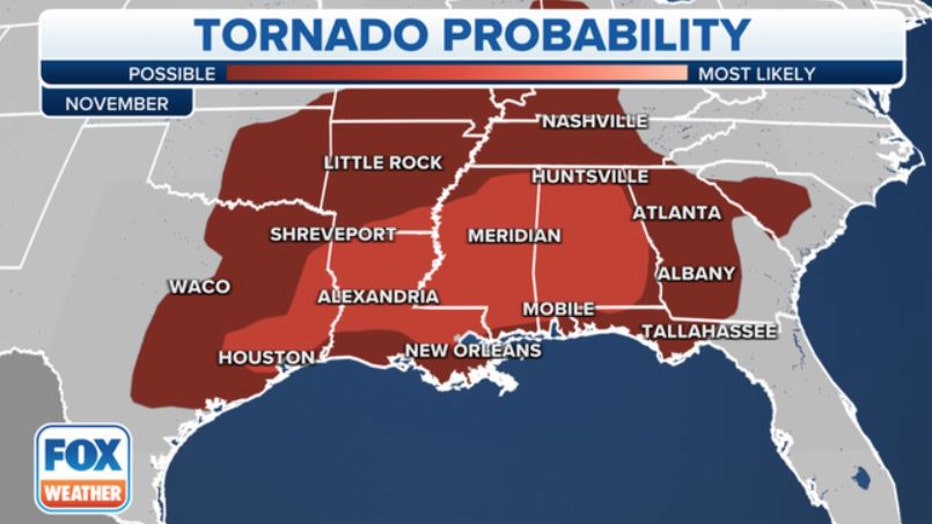