Row of businesses shot up again in Silver Spring

Several buildings in the Silver Spring area of Montgomery County were struck by bullets Sunday night. FOX 5's Stephanie Ramirez reports on the uptick of crime in the area.

SILVER SPING, Md. - No injuries were reported after several business owners in the Silver Spring area of Montgomery County had their storefronts shot out or damaged by bullets early Monday morning.

This is the second row of businesses to be shot up in three months in the Downtown Silver Spring area. 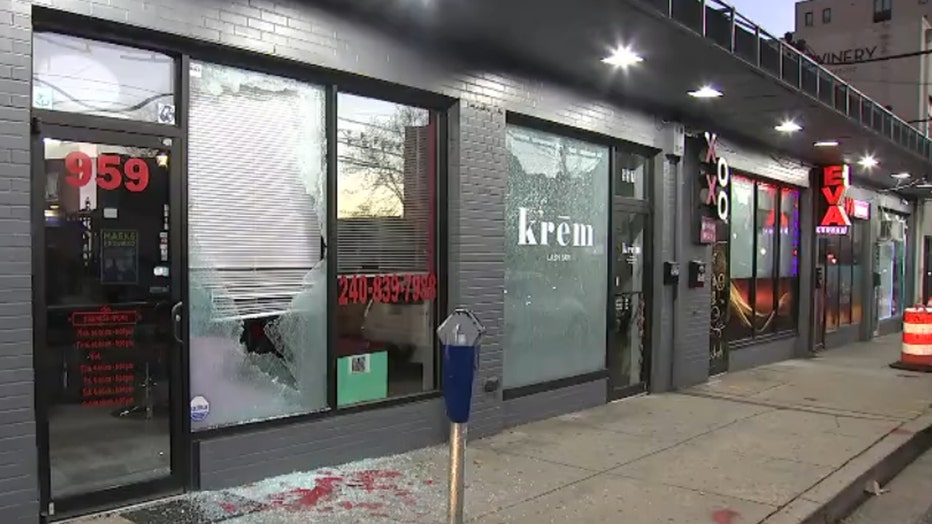 Montgomery County Police say at least two people exchanged gunfire along Georgia Avenue near Thayer and Bonifant Streets. FOX 5 was told the shooting likely had to do with some type of altercation as a nearby club let out.

Police were originally called by an off-duty officer to respond to a fight at Society Restaurant & Lounge on the 8000 block of Georgia Ave. at around 2 a.m., Monday. "Moments later," the person who called police reported shots fired in the area, according to a police press release.

No injuries were reported after several buildings in the Silver Spring area of Montgomery County were struck by bullets overnight.

The owners of "Danny’s Hair Studio" on Bonifant St. told FOX 5 police found two bullet holes in back of a barber chair sitting closest to their storefront window, which was also shot out.

"We’ve been here 11-years. We were fine but now we start finding out like cars of ours are being stolen. A couple of months ago there was someone being shot and uh – you get scared," said owner Elizabeth Lakew.

"Its senseless crimes, like constantly, and it’s just really upsetting, and it’s going to – you know – affect the impact of small businesses in the area," said Krēm Lash Bar owner El Moon.

Moon told FOX 5 she moved back from Miami to open in the area a few years ago, loving how many of Silver Spring’s small business owners are people of color and female.

Last week, Montgomery County States Attorney John McCarthy spoke at the arraignment of an 18-year-old charged in the fatal drug-related stabbing of a 19-year-old on Ellsworth Place.

He said for the past four months, police and prosecutors have been working together on a task force to address criminal activity in Downtown Silver Spring including an alleged open drug market operating around the Silver Spring Civic Building at Veterans Plaza.

The state's attorney’s office provided FOX 5 with more information on at least seven other arrests the task force has secured for incidents reported around Veterans Plaza.

The offenses range from burglary – a suspect caught after prints were found along with a half-eaten sandwich following a break-in at the Vietnam Veterans Office of America – to an arrest for the suspected sale of edibles by someone alleged to have been with a group openly using marijuana. Investigators said they found a scale in the suspect’s vehicle.

None of the seven suspects identified and connected to various incidents throughout the past year were shown to have a Montgomery County address in charging documents.

Montgomery County Police Chief Marcus Jones told FOX 5 while the early Monday shooting along Bonifant St. appears to be more random, there is something going on with the growth in Downtown Silver Spring in buildings, population, nightlife and other activity – but not growth in the area’s police footprint. It’s something Chief Jones said county leaders will have to address for future planning.

FOX 5 also asked Chief Jones about the state's attorney’s remarks – that most of the drug-related offenses include marijuana. Would legalizing marijuana transactions help?

"I don’t think so," said Chief Jones, "…there will always be a black market for illegal drug sales and I think as a community, we must understand that. That yes, there may be less individuals who may be willing to purchase marijuana off the black market and actually go to a legalized store, but a black market is going to exist. It exists in states where there have been legalized marijuana. That it does not stop organizational – organizations that distribute drugs, the marijuana hasn’t dried up. It’s only been enhanced. So as much as I would like to say it would be a benefit, I don’t think it is going to be the actual solving of incidents that occur in our communities."

Chief Jones emphasized that the task force is focused on violent crimes happening in the Downtown Silver Spring community – not just drug or marijuana sales.

He spoke to the challenge of the county’s youth not being able to access needed services and recruitment and retention with local police departments.

"We also know that this is going to require a regional approach for us to be able to fully address because the challenges that we’re seeing in Montgomery County are not unique to the county. And oftentimes the perpetrators of these crimes don’t necessarily reside in the county or vice versa and so we have to be able to work holistically," said the newly elected council president.

"The council stands ready to support efforts to ensure the public safety of all of our residents because we know there is nothing more important and we don’t believe this is incongruent with helping to ensure there is trust, accountability and transparency in our law enforcement," Albornoz added.