Protesters in support of President Trump gather in DC

As Congress meets on Wednesday to certify the results of the 2020 presidential election, pro-Trump protests are planned in D.C. by multiple groups. President Trump announced Tuesday he will speak at one of the rallies.

WASHINGTON (FOX 5 DC) - On Tuesday, as thousands packed Freedom Plaza for multiple pro-Trump rallies planned in the District this week, members of the mayor’s office confirmed police already arrested six individuals on charges that include bringing illegal guns to the city.

The District’s leaders spent the day on Monday warning the public it is illegal to have firearms within 1,000 ft. of a First Amendment demonstration. The warnings came as D.C.’s new Police Chief Robert Contee told reporters they have knowledge some were planning to come armed as election demonstrations take place throughout the Downtown area.

READ MORE: Everything you need to know about the pro-Trump protests in DC

As of 10 p.m. Tuesday, District leaders say the six arrested were charged for offenses that include: carrying a pistol and carrying a rifle without a license, possessing a high capacity feeding device, carrying unregistered ammunition, an unregistered firearm, driving an unauthorized van without a permit, simple assault, possession of a prohibited weapon (taser) and possessing illegal fireworks. 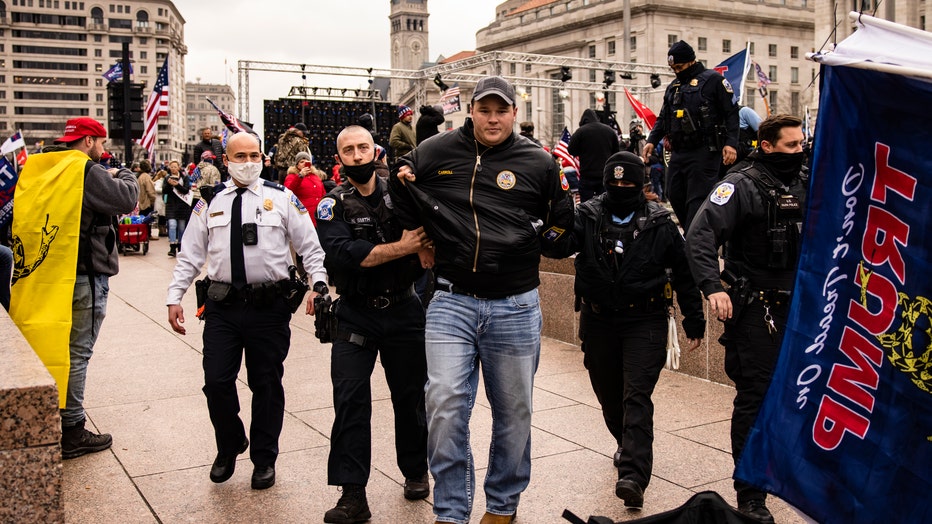 WASHINGTON, DC - JANUARY 05: US Park Police officers arrest a man on gun charges after officers spotted him carrying a concealed firearm during a pro-Trump rally at Freedom Plaza on January 5, 2021 in Washington, DC. (Photo by Samuel Corum/Getty Imag

The city’s mayor, police chief and other emergency management partners announced an all-hands on deck approach to this week’s pro-Trump rallies, which are planned to protest Congress’ Wednesday vote to certify Electoral votes for President-elect Joe Biden.

That preparation also came with criticism of DC Mayor Muriel Bowser from Trump-supporters and newly elected Congresswoman Lauren Boebert, for activating the National Guard ahead of this week’s protests.

"...Where was the National Guard when ANTIFA and BLM terrorized the streets all summer?" wrote in part of a tweet.

We are just a few hours from pro-Trump demonstrations wrapping up in the District today.

Over the summer, D.C. saw a massive, peaceful George Floyd protest on May 30th. By the evening, however, gatherings erupting into rioting in the Downtown area. There had been rumblings an intense evening might follow. By night, riots erupted.

Mayor Bowser had said then, what struck her was how organized those intent on causing damage were. D.C. officials said some had tools.

The next day, on the evening of May 31st, Mayor Bowser shared a tweet announcing that she had activated a curfew and requested the D.C. National Guard. A spokesperson in the Mayor’s office confirm that request was supposed to last until June 6th.

This was for "some" guard members.

D.C. National Guard Spokesperson Senior Master Sgt. Craig Clapper told FOX on the same day, the Secretary of the Army also requested full activation. This was when the President was calling for National Guards across the country to respond. That request took precedence.

That night rioters set fire to the basement of St. John's Episcopal Church. D.C. Police tell FOX 5 they are still investigating that case.

June 1st is when federal law enforcement members forcefully cleared the Lafayette Park of peaceful protesters. The President walked out to St. John’s Church for a photo op after.

Director Chris Rodriquez of the District’s Homeland Security and Emergency Management Agency told FOX 5 in response to the criticism, "This has been an unpreceded year for the District, certainly some of the activities that we saw over the summer, which were not only an affront to District of Columbia’s home rule but also an affront to Democracy, really compelled us over the summer and then of course as we approach the election, to re-double our efforts for First Amendment activities."

In both June and now, the D.C. National Guard members called are unarmed, to assist with areas of crowd and traffic control so that police can focus on those looking to cause harm.

"The District of Columbia Government has not requested personnel from any other federal law enforcement agencies," she wrote, calling on the federal leaders to coordinate with and contact D.C. Police immediately if they plan to do so.

This is in response to events that happened in June, as the Mayor and President publically battled over who has the authority to mobilize law enforcement in the District.

Asking people in the area their thoughts of events in D.C. this week, Patti Hidalgo, a Loudoun County, Virginia mother, told FOX 5 she’s planning to attend with a group on Wednesday.

"We want to be safe. We know that it’s part of our constitutional right to protest. I think that the overreaction from the Mayor in D.C. is a little bit much. Our objective is not to be violent. Our objective is to be peaceful – to stand by our President."

In Prince George’s County, Asia May told FOX 5, "I just think it’s a distraction. It’s a new year and I just think we should move on to new things. We have a lot going on, new strands and trying to get over the pandemic."