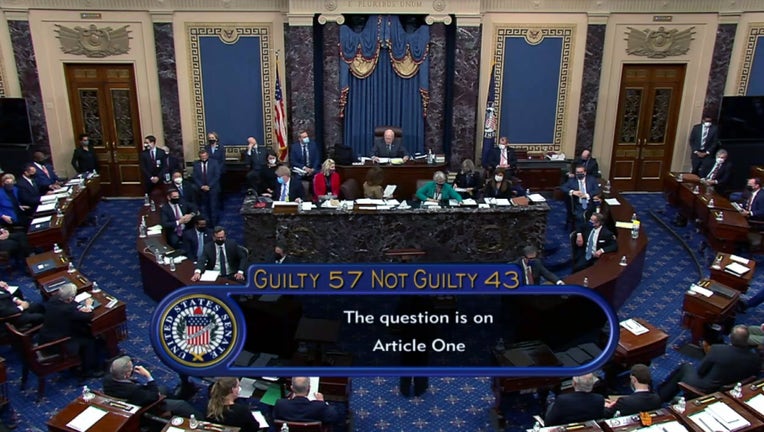 WASHINGTON, DC - FEBRUARY 13: In this screenshot taken from a congress.gov webcast, Senate votes 57-43 to aquit on the fifth day of former President Donald Trump's second impeachment trial at the U.S. Capitol on February 13, 2021 in Washington, DC. H

WASHINGTON - The U.S. Senate on Saturday voted to acquit former Pres. Donald Trump on a charge that he incited the deadly mob that raided the U.S. Capitol last month.

Saturday's rare impeachment session began with an unexpected vote to consider witnesses at the trial, making a Saturday verdict unlikely.

But hours later House Impeachment Managers and Trump's defense team struck a compromise allowing a new statement from Rep. Jaime Herrera Beutler into the record instead.

The Republican congresswoman had shared a conversation she had with House Minority Leader Mike McCarthy regarding Pres. Trump's comments the day of the Capitol attack, Jan. 6.

The Senate held a roll call vote after a few hours of closing arguments.

Senators Burr and Toomey are retiring at the end of their current terms in January 2023.

The seven Republicans who joined Democrats in voting to convict Pres. Trump marks the most bipartisan vote in a Senate impeachment trial.

In closing arguments, Trump's lead defense attorney Michael van der Veen fell back on the procedural argument that Republican senators have embraced in their own reasoning of the case what he said is a "phony impeachment show trial."

"Mr. Trump is innocent of the charges against him," said Michael van der Veen. "The act of incitement never happened."

The House impeached trump on the sole charge of incitement of insurrection one week after the riot, the most bipartisan vote of a presidential impeachment.

The delay Saturday came as senators wanted to hear evidence about Trump's actions during the riot.

Fifty-five senators voted for to consider witnesses, including Susan Collins of Maine, Lisa Murkowski of Alaska, Ben Sasse of Nebraska and Mitt Romney of Utah. Once they did, Lindsey Graham of South Carolina changed his vote to join them on the 55-45 vote.

But facing a prolonged trial with defense poised to call many more witnesses, the situation was resolved when Herrera Beutler's statement on the call was read aloud into the record for senators to consider as evidence. As part of the deal, Democrats dropped their planned deposition and Republicans abandoned their threat to call their own witnesses.

Impeachment trials are rare, senators meeting as the court of impeachment over a president only four times in the nation's history, for Andrew Johnson, Bill Clinton and now twice for Trump, the only one to be twice impeached.

Unlike last year's impeachment trial of Trump in the Ukraine affair, a complicated charge of corruption and obstruction over his attempts to have the foreign ally dig up dirt on then-campaign rival Biden, this one brought an emotional punch displayed in graphic videos of the siege that laid bare the unexpected vulnerability of the democratic system.

At the same time, this year's trial carried similar warnings from the prosecutors pleading with senators that Trump must be held accountable because he has shown repeatedly he has no bounds.

Left unchecked, he will further test the norms of civic behavior, even now that he is out of office still commanding loyal supporters.

"This trial in the final analysis is not about Donald Trump," said lead prosecutor Rep. Jamie Raskin, (D-Md). "This trial is about who we are."