Big changes are being made to the way players, coaches, and fans are kept safe at high school football games in Montgomery County. FOX 5's David Kaplan has the latest following the massive brawl at a Gaithersburg-Northwest football game.

MONTGOMERY COUNTY, Md. - Big changes are being made to the way players, coaches, and fans are kept safe at high school football games in Montgomery County.

Leaders from the public school district held a news conference Wednesday afternoon to announce a number of enhanced security measures at athletic events.

"We're at a point where we realize some adjustments need to be made around some of our athletic programs," MCPS Superintendant Monifa McKnight said.

The new rules, which include no re-entry after halftime, no backpacks, and no large gatherings during games, are in response to a massive brawl at a recent Gaithersburg vs. Northwest football game and the off-field altercations that occurred after the match.

MCPS officials mentioned fights like these can’t happen and indicated there were some other instances less severe than this one at other games. 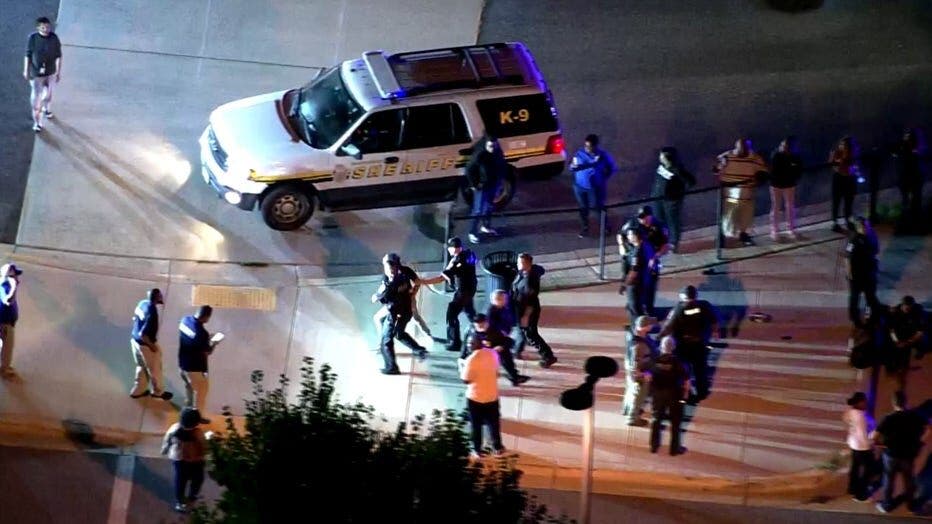 So far, four juveniles and a 19-year-old have been charged for a second fight that happened after last Friday’s game.

FOX 5 has obtained court documents that give some clarity on the altercation between Gaithersburg's athletic director and Northwest's head football coach.

Gaithersburg Athletic Director William Gant outlined in a private criminal complaint that he said he was trying to deescalate the on-field fight when he was "struck in the head and shoulder from the side by another person."

"The man was later identified by the Northwest High School athletics specialist to be the head football coach Travis Hawkins," the complaint reads.

Eventually, there will be a court hearing and police and the state’s attorney will determine if and how to proceed.

Montgomery County officials declined Wednesday afternoon to elaborate on the status of either men in their roles, citing it being a personnel matter despite the very public fight.

FOX 5 spoke with an attorney for Hawkins who said she had no comment at this time.

MCPS has released a statement saying it is "committed to the safety and security of students, families and community members who want to enjoy various athletic contests, and will not tolerate the indefensible and violent behavior and actions that have occurred in the opening weeks of this fall season."