Fairfax County Police gave updates on the investigation into shots that were fired into multiple parked vehicles in the Bailey's Crossroads area.

BAILEY'S CROSSROADS, Va. - The search is on for a shooter in Fairfax County who is responsible for damaging several cars and putting many people in danger.

The shooting Friday morning was near a very busy shopping area and the situation even caused two local schools – including Wakefield High School – to go on lockdown.

During an afternoon press conference, Fairfax County police said the shots appeared to be fired from a ground-level position. The cyber crime scene unit recovered two different pistol rounds at the scene, and forensics showed that the weapon was not a high-powered rifle — which they previously said it was.

Earlier in the day, police said they thought the gunfire may have come from the Skyline Tower apartment building, located in the 5500 block of Seminary Road.

At this time, police say they no longer believe the shots originated there, and they don't believe the gunman was in an elevated location.

Police are now looking into whether the shots came from an area near the Starbucks on South Jefferson Street.

Officers responded to the Bailey's Crossroads neighborhood in Falls Church around 11:15 a.m. for reports of shots fired.

When they arrived, they found two sedans that were parked and unoccupied riddled with bullets.

Authorities are asking people in the Bailey's Crossroads section of Fairfax County to shelter in place after several vehicles were damaged by gunfire Friday.

Investigators say there were two people who were outside the Starbucks right by South Jefferson Street and Leesburg Pike that heard and saw the car window's glass shatter. No injuries were reported.

FOX 5 spoke with a witness who said he was inside the Skyline Towers when the scene was unfolding.

"Everyone just running. That's all it was," John Harris said. "It was just chaotic. It’s crazy to actually hear it on TV then live it. It’s two different things: It’s wild. It’s really crazy. I never expected to be here. Never."

Police say this was not an active shooter situation and there is no suspect description at this time.

Route 7 has reopened, however, police are asking people to avoid the area while the investigation continues.

The S.W.A.T. team, K-9 Unit and major crime detectives are working to figure out which floor the high-powered rifle rounds came from in the Skyline Towers.

There's no suspect description at this time. Police say this was not an active shooter situation. 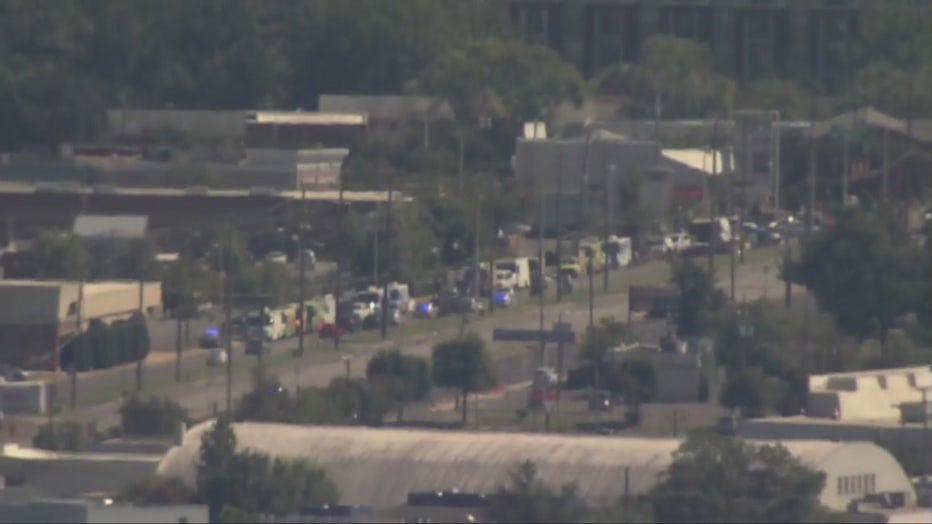