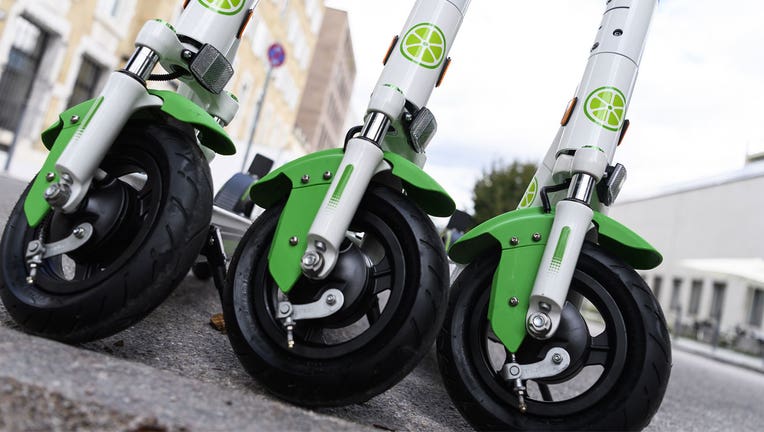 Lime scooters are shown in a file photo. (Photo by Edith Geuppert/picture alliance via Getty Images)

ARLINGTON, Va. - Capping scooter speeds and allowing dockless rides on sidewalks are some of the proposals Arlington County officials will consider next month.

Officials released the proposed scooter regulations ahead of the county board meeting Nov. 16.

The proposals arrive after what officials are calling a successful e-scooter pilot program, which included nearly 500,000 trips over its first 10 months.

“Our community has a wide variety of opinions about e-scooters and e-bikes,” Arlington County Board Chair Christian Dorsey said in a statement. “But the demonstration project clearly showed these devices are serving a need and add another safer, more sustainable travel option than driving a car."

County staff will recommend the board adopt new regulations allowing scooter commuters to ride on any sidewalk except on streets with protected bicycle lanes. The proposed ordinance would cap scooter speeds to 15 miles-per-hour on the street and six miles-per-hour on sidewalks.

Officials will also consider mandating that 15 percent of dockless bikes and scooters be deployed every morning outside the county's Rosslyn-Ballton and Route 1 development corridors. Vendors like Jump and Bird would also be required to offer discounts to lower-income residents.

Staff found there were about 80,000 scooter trips per month this summer in Arlington County.

The proposed dockless ride ordinance would take effect on Jan. 1.

The public is invited to share ideas and concerns at the Nov. 16 meeting.

Whether you’re in D.C., Maryland, or Virginia — it’s tough to go anywhere these days without passing a scooter, but with prevalence comes problems. Now, Arlington trying to avoid those well-documented scooter struggles.