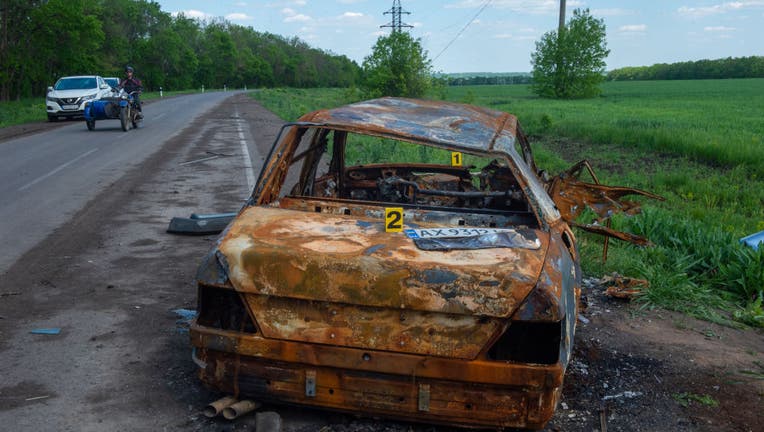 A car of volunteers, which was shot from a tank by the Russian military near the village of Mala Rogan, Kharkiv region, Ukraine on May 23, 2022. (Photo by Sofia Bobok/Anadolu Agency via Getty Images)

MOSCOW - When Russia invaded Ukraine on Feb. 24, it had hoped to overtake the country in a blitz lasting only days or a few weeks. Many Western analysts thought so, too.

As the conflict marked its third month Tuesday, however, Moscow appears to be bogged down in what increasingly looks like a war of attrition, with no end in sight and few successes on the battlefield.

There was no quick victory for Russian President Vladimir Putin’s powerful forces, no rout that would allow the Kremlin to control most of Ukraine and establish a puppet government.

Instead, Russian troops got bogged down on the outskirts of Kyiv and other big cities amid stiff Ukrainian defenses. Convoys of Russian armor seemed stalled on long stretches of highway. Troops ran out of supplies and gasoline, becoming easy targets from the land and the air.

A little over a month into the invasion, Russia effectively acknowledged the failure of its blitz and pulled troops back from areas near Kyiv, declaring a shift of focus to the eastern industrial region of the Donbas, where Moscow-backed separatists have been fighting Ukrainian forces since 2014.

Video by RFE/RL at Hostomel airport outside Kyiv shows the wreck of the world’s biggest plane, the Antonov 225, and destroyed Russian military vehicles on April 2, 2022. Credit: Radio Free Europe/Radio Liberty via Storyful

To be sure, Russia has seized significant chunks of territory around the Crimean Peninsula that Moscow annexed eight years ago. It also has managed to cut Ukraine off completely from the Sea of Azov, finally securing full control over the key port of Mariupol after a siege that prevented some of its troops from fighting elsewhere while they battled diehard Ukrainian forces.

But the offensive in the east seems to have bogged down as well, as Western arms flow into Ukraine to bolster its outgunned army.

Each day, Russian artillery and warplanes relentlessly pound Ukrainian positions in the Donbas, trying to break through defenses built up during the separatist conflict.

They have made only incremental gains, clearly reflecting both Russia's insufficient troop numbers and the Ukrainian resistance. In one recent episode, Russians lost hundreds of personnel and dozens of combat vehicles while trying to cross a river to build a bridgehead.

"The Russians are still well behind where we believe they wanted to be when they started this revitalized effort in the eastern part of the country," Pentagon press secretary John Kirby said Friday, describing the Donbas fighting as very dynamic, with small towns and villages changing hands every day.

But in their struggle to gain ground, Russian forces have also relentlessly shelled cities and laid siege to some of them. In just the latest example of the war's toll, 200 bodies were found in a collapsed building in Mariupol, Ukrainian authorities said Tuesday.

The Kremlin appears to still harbor a more ambitious goal of cutting off Ukraine from the Black Sea coast all the way to the Romanian border, a move that would also allow Moscow to build a land corridor to Moldova’s separatist region of Transnistria, where Russian troops are stationed.

A military parade was held in Moscow, Russia, on May 9, 2022, to mark Victory Day, Russia’s annual celebration of its victory over Nazi Germany in WWII.

But Moscow seems to know that this objective is not currently achievable with the limited forces it has.

"I think they’re just increasingly realizing that they can’t necessarily do all of it, certainly not at one go," said Justin Crump, a former British tank commander who heads Sibylline, a strategic advisory firm.

Moscow’s losses have forced it to rely increasingly on hastily patched-together units in the Donbas that could only make small gains, he said.

"It’s a constant downshifting of gear toward smaller objectives that Russia can actually achieve," Crump said. "And I think on the biggest scale, they’ve actually downsized their strategy better to match their their ability on the ground."

Many in Ukraine and the West thought Putin would pour resources into the Donbas to score a decisive triumph by Victory Day on May 9, when Moscow celebrates its defeat of Nazi Germany in World War II. Russia has falsely called the war a campaign to "denazify" Ukraine — a country with a democratically elected Jewish president who wants closer ties with the West.

Rather than a massive campaign in the east, however, the Kremlin opted for a series of tactical mini-offensives there, aimed at steadily gaining ground to try to encircle Ukrainian forces.

"The Russian leadership is urging the military command to show at least some gains, and it has nothing else to do but to keep sending more troops into the carnage," said Mykola Sunhurovskyi, a military expert at the Kyiv-based Razumkov Center think-tank.

Many in the West expected Putin to declare a broad mobilization to fill up the Russian ranks. British Defense Secretary Ben Wallace warned that Putin might time an announcement to Victory Day.

But it never happened, and Russia has continued to rely on a limited force that was clearly insufficient against Ukrainian defenses.

A massive mobilization would likely foment broad discontent in Russia, fuel antiwar sentiment and carry massive political risks. Authorities opted for more limited options, with lawmakers drafting a bill to waive the current age limit of 40 for those willing to sign up for the military.

RELATED: Russia claims to have taken full control of Mariupol amid its war with Ukraine

The lack of resources was underlined last week by an abrupt Russian withdrawal from areas near Kharkiv, Ukraine’s second-largest city that has been bombarded since the start of the war. Some of those forces apparently were redeployed to the Donbas, but it wasn't enough to tip the scales on the battlefield.

"They really had to thin out the troops they had around Kharkiv, simply because they’re trying to hold to too much of a line with too few troops," said Phillips O’Brien, professor of strategic studies at the University of St. Andrews in Scotland.

The Donbas fighting has increasingly morphed into artillery duels, and "it might go on for quite a long time without much movement in the lines," he said.

"So it will be a more of a positional battle at that point, O'Brien added, with success going to whoever "can take the pounding."

Ukraine, meanwhile, continues to get a steady flow of Western weapons, including U.S. howitzers and drones, tanks from Poland and other heavy gear that is immediately sent into combat.

"Ukraine’s plan is simple and obvious — wear down the Russian forces in the nearest months as much as possible, win time for receiving Western weapons and training how to use them, and then launch a counteroffensive in the southeast," said Sunhurovskyi, the Kyiv-based military expert.

The eastern deadlock has angered hard-liners in Russia, who warned that Moscow can’t win if it doesn’t conduct a massive mobilization and concentrate all of its resources in a decisive attack.

Igor Strelkov, a former security officer who led the separatists in Donbas in 2014, denounced what he described as the Kremlin’s indecision, saying it could pave the way for defeat.

"For Russia, the strategic deadlock is deepening," he said.

Ukrainian authorities, meanwhile, are increasingly emboldened by the slow pace of the Russian offensive and growing Western support.

While Ukrainian President Volodymyr Zelenskyy reaffirmed last week that pushing the Russians back to their pre-invasion positions would represent a victory, some of his aides declared even more ambitious goals.

Adviser Mykhailo Podolyak said Ukraine isn’t interested in a cease-fire "until Russia is ready to fully liberate occupied territories," a bold statement that appears to reflect hopes for reclaiming the Donbas and Crimea.

Russia, meanwhile, apparently aims to bleed Ukraine by methodically striking fuel supplies and infrastructure while making grinding military gains in the east. The Kremlin may also hope that Western interest in the conflict will eventually fade amid the economic challenges and other problems.

"Their final hope is that we will lose interest completely in the conflict in Ukraine by the summer," Crump said. "They’re calculating the Western audiences will lose interest in the same way as Afghanistan last year. Russia thinks that time is working in its favor."