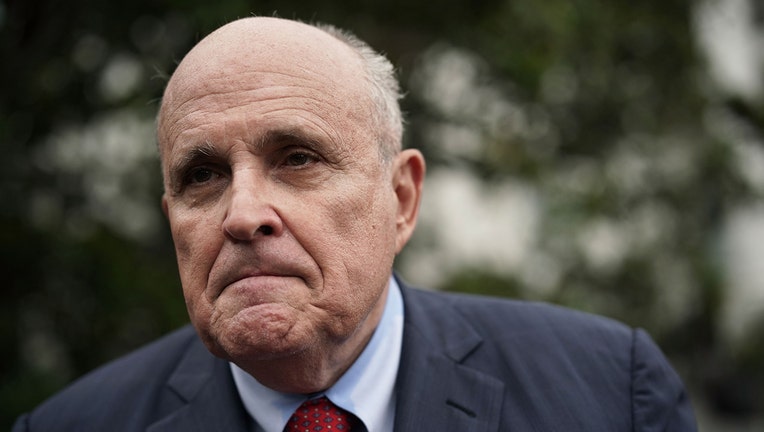 Rudy Giuliani speaks to the press at the White House.

Giuliani’s license to practice law in New York was suspended in June over concerns that he made "demonstrably false and misleading statements" to various courts, lawmakers and the public about Trump's loss in the 2020 election to Joe Biden.

In D.C., an appellate court banned him from practicing law pending a disciplinary review in New York.

The suspension in New York is an "interim" one, and will be in effect as full disciplinary proceedings against him play out. The court recognized that this is a severe measure that they believe is appropriate given "an immediate threat to the public interest."

Giuliani's statements are alleged to be in violation of the New York Rules of Professional Conduct, which govern the conduct of attorneys in the state.
The court's ruling said it is likely that when the full case has concluded, it will "result in substantial permanent sanctions" against the former mayor.

President Donald Trump's campaign and his personal attorney held a news conference Thursday on the progress of legal actions regarding the President’s election challenge.

"[W]e conclude that there is uncontroverted evidence that respondent communicated demonstrably false and misleading statements to courts, lawmakers and the public at large in his capacity as lawyer for former President Donald J. Trump and the Trump campaign in connection with Trump’s failed effort at reelection in 2020," the New York ruling said.

Those statements, the court said, "were made to improperly bolster respondent’s narrative that due to widespread voter fraud, victory in the 2020 United States presidential election was stolen from his client."

In addition to serving as his lawyer, Giuliani acted as a de facto mouthpiece for the Trump administration, and championed his cause for overturning the results of the 2020 election.

After President Joe Biden won the 2020 election, Trump continually repeated claims that the results were fraudulent, with Giuliani representing him in various states that had tipped the scales in the Democrat’s favor.