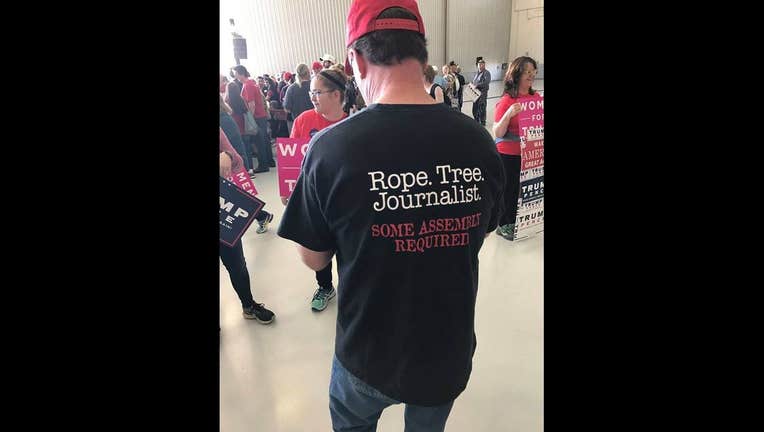 A photo of a man at a Donald Trump rally in Minnesota wearing a t-shirt suggesting the lynching of journalists has gone viral. Reuters Politics captured the image at a November 6 rally that took place at Minneapolis-St. Paul International Airport.

The man was wearing a black t-shirt with the following words on the back: Rope. Tree. Journalist. SOME ASSEMBLY REQUIRED

The photo went viral after it was tweeted by Washington Post writer Breanne Deppisch.

This man wants me dead.

It's as simple as that. Welcome to the state of political discourse on November 6, 2016.

Why do I know this? Because I'm a journalist. I've been one for 15 years. We are the ones that go into your community and listen to your stories. It is our charge to take what we learn to the people who can enact change. It is our duty to uncover the truth, to correct the untruths, and give you, the American people, a platform to share your concerns. There are people that have literally put their lives on the line to reveal injustice, whose jobs took them to far more dangerous places than I could ever imagine.

Yet this man believes we're traitorous, we're bought and paid for, we're in the tank, we're corrupt (trust me, I've heard every permutation of this). He also believes the only way forward is to do away with the constitutionally-mandated right to a free press, and in turn, those who work in any newspaper, magazine, TV station, radio newsroom, digital operation, or anywhere else. He thinks we're all expendable...and that we need to die.

There have been documented instances of journalistic malpractice through the years, and during this election cycle -- just as there is malpractice in every other industry. That doesn't make it right. But just as in any occupation, you have exponentially more good eggs than bad - and they easily reveal themselves in due time.

You have a right to be upset when the media fails you. But how does that motivate someone to wear a shirt like this? I'm at a loss. What makes this acceptable?

Yes, we live in a world where you can reach vast audiences on your own via social media - and you should harness that power. We're here to offer context and to provide facts. Our jobs have evolved through the years, but we still stand for the First Amendment....if only this man stood for decency.