A Rockville woman says she woke up Sunday morning to find someone had smashed in her front window where she had a ‘Maryland for Trump’ sign displayed.

ROCKVILLE, Md. (FOX 5 DC) - A Rockville woman says she woke up Sunday morning to find someone had smashed in her front window where she had a ‘Maryland for Trump’ sign displayed.

Brigitta Mullican said she’s lived in the Twinbrook area for 55 years and in her home for 42 years.

She says over the summer, someone broke two additional windows and stole her Trump yard signs and flag. One of the incidents, captured on her Ring camera, shows a young woman grabbing signs and pulling down the flag, laughing as she runs to the car.

“I’ve never had something like this happen, it’s the first time,” Mullican said. “I have to tell you that I really wonder if I want to stay here because it’s just very disheartening.” 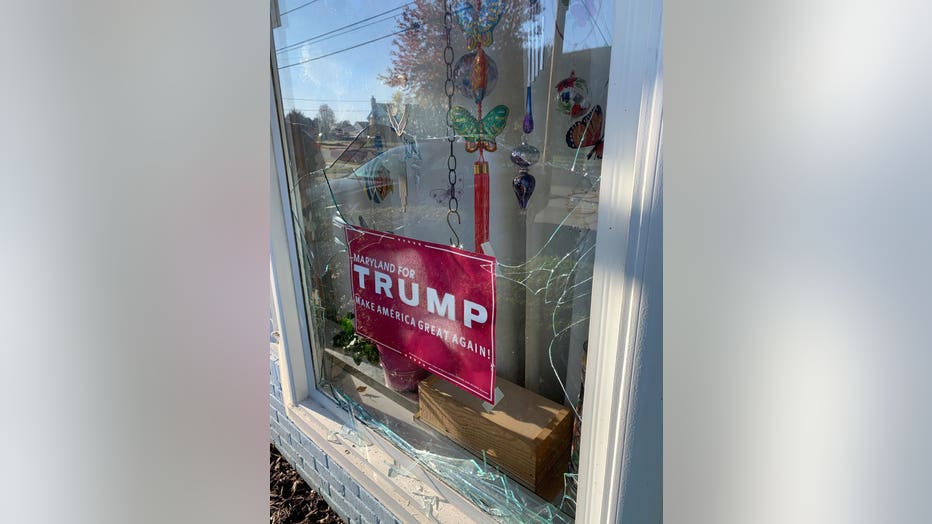 Mullican says her Ring camera did not capture the window-smashing Saturday into Sunday. She filed a report with Montgomery County police Sunday morning and shared what happened with neighbors on Facebook and Nextdoor.

“They’re very supportive, very sorry,” said Mullican. “They’ve said, ‘it’s alright for us to have political differences, but this is unacceptable.’”

Betty Gutierrez, who lives next door, said people should be able to display political signs of their choice.

“This is really terrible what happened to my neighbor, Brigitta,” said Gutierrez. “This is a quiet neighborhood.”

One neighbor even brought Mullican a plate of chocolates and cookies to cheer her up.

”Little things like that mean a lot,” said Mullican.

She said fixing the window will cost $840. While she doesn’t expect to find the culprit, she’s hopeful.

”Stealing signs is nothing, but literally picking up your brick out in front of your doorstep and throwing it in the window and breaking it, I mean, that’s pretty serious,” she said. “It sure would make me feel better to know who it was.