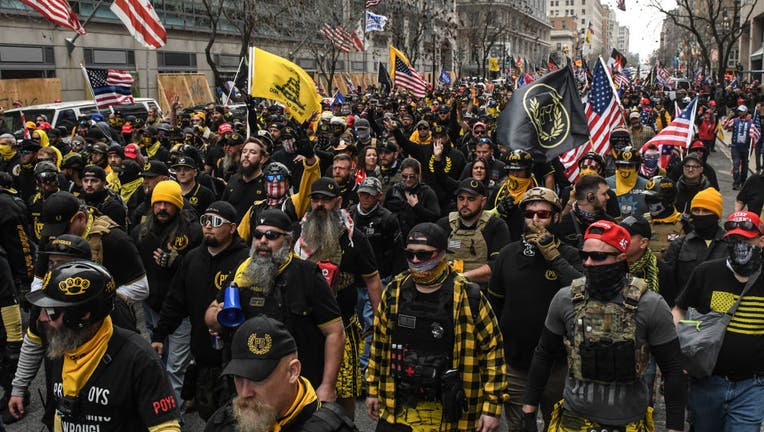 WASHINGTON - A North Carolina man pleaded guilty Thursday to plotting with other members of the far-right Proud Boys to violently stop the transfer of presidential power after the 2020 election, making him the first member of the extremist group to plead guilty to a seditious conspiracy charge.

Jeremy Joseph Bertino, 43, has agreed to cooperate with the Justice Department’s investigation of the role that Proud Boys leaders played in the mob’s attack on the Capitol on Jan. 6, 2021, a federal prosecutor said.

Bertino’s cooperation could ratchet up the pressure on other Proud Boys charged in the siege, including former national chairman Henry "Enrique" Tarrio.

The guilty plea comes as the founder of the another extremist group, the Oath Keepers, and four associates charged separately in the Jan. 6 attack stand trial on seditious conspiracy — a rarely used Civil War era offense that calls for up to 20 years behind bars.

A House panel investigating the Jan. 6 insurrection at the U.S. Capitol has firmly laid blame on Donald Trump. In Thursday's prime-time hearing, lawmakers said the siege was no accident but an "attempted coup" and a direct result of the defeated president's effort to overturn the 2020 election.

Bertino traveled to Washington with other Proud Boys in December 2020 and was stabbed during a fight, according to court documents. He was not in Washington for the Jan. 6 riot because he was still recovering from his injuries, court papers say.

Bertino participated in planning sessions in the days leading up to Jan. 6 and received encrypted messages as early as Jan. 4 indicating that Proud Boys were discussing possibly storming the Capitol, according to authorities.

A statement of offense filed in court says that Bertino understood the Proud Boys’ goal in traveling to Washington was to stop the certification of Joe Biden’s victory and that the group was prepared to use force and violence if necessary to do so.

On Jan. 6, Bertino applauded the insurrection from afar and sent messages encouraging other Proud Boys to keep pushing toward the Capitol.

"DO NOT GO HOME. WE ARE ON THE CUSP OF SAVING THE CONSTITUTION," he wrote on a social media account. That night, he messaged Tarrio, "You know we made this happen."

A trial is scheduled to start in December for Tarrio and four other members charged with seditious conspiracy: Ethan Nordean, Joseph Biggs, Zachary Rehl and Dominic Pezzola. The charging document for Bertino’s case names those five defendants and a sixth Proud Boys member as his co-conspirators.