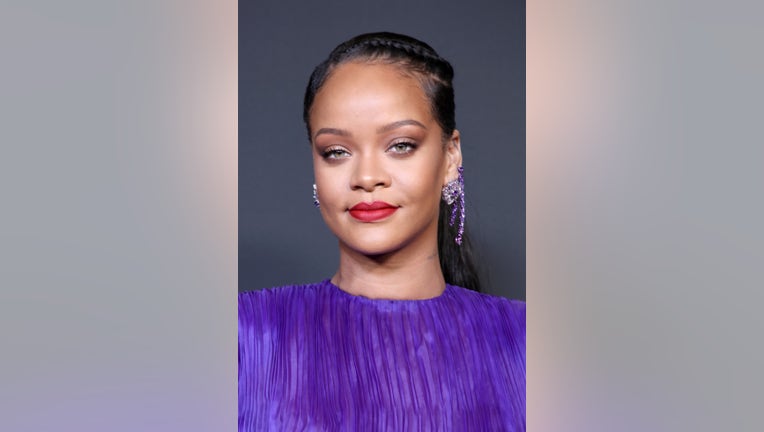 Rihanna poses with the President’s Award at the 51st NAACP Image Awards, Presented by BET, at Pasadena Civic Auditorium on February 22, 2020 in Pasadena, California. (Photo by Robin L Marshall/Getty Images for BET)

Rihanna is the latest celebrity to speak out against Kentucky Attorney General Daniel Cameron, who earlier this week warned the public against listening to celebrity's comments on the Breonna Taylor shooting indictment.

On Wednesday, fired Louisville officer Brett Hankison was indicted on three counts of wanton endangerment in the first degree. He was one of three police officers involved in the Louisville, Ky. drug operation that led to Taylor’s death in March. No charges were immediately announced against the two other officers involved in the raid, Myles Cosgrove and Sgt. Jonathan Mattingly.

Rihanna took to Instagram on Friday, two days after the grand jury's verdict, with a strong message aimed at Cameron. Her post included a photo of a protestor's sign that reads, "A cop shot a black woman and was only charged for the shots missed."

The Barbados-born artist captioned the picture, "I'm just gon' let this sink in to your hollow skull @danieljaycameron."

The "Work" singer follows in the footsteps of George Clooney, Jennifer Aniston, and comedian D.L. Hughley, who have all shared their distaste for Cameron's words and actions following the indictment this week.

Shortly after Hankison's charges were announced, Clooney, a Kentucky native, blasted Cameron, who warned the public against listening to "celebrities, influencers and activists'" reactions.

“There will be celebrities, influencers and activists who having never lived in Kentucky will try to tell us how to feel, suggesting they understand the facts of this case, that they know our community and the Commonwealth better than we do, but they don’t," Cameron said, according to The Hollywood Reporter.

Clooney claimed he was more than allowed to join in on the chorus of naysayers due to the fact that he was born and raised in the state.

"The justice system I was raised to believe in holds people responsible for their actions. Her name was Breonna Taylor and she was shot to death in her bed by 3 white police officers, who will not be charged with any crime for her death. I know the community. I know the commonwealth. And I was taught in the schools and churches of Kentucky what is right and what is wrong. I’m ashamed of this decision," the actor said.

Meanwhile, Aniston directed her millions of Instagram followers to call Cameron and Louisville Mayor Greg Fischer and "demand that Myles Cosgrove and Jonathan Mattingly are fired and charged with homicide."

"We are so sorry, Breonna," the "Friends" alum added to her Instagram Story.

D.L. Hughley also slammed the attorney general in an interview with TMZ. He quoted the famous quote from Dr. Martin Luther King, saying, "Injustice anywhere is a threat to justice everywhere."

The comedian continued: "So I'd rather listen to a noteworthy person in history than a footnote in history. This isn't a question of Black celebrities speaking out. I happen to have a Black wife and Black daughters and Black nieces and nephews."

Taylor, 26, died after officers initiated what was reported to be a no-knock warrant on her apartment during a drug investigation. They fired 20 rounds into the home, striking Taylor eight times. Authorities said they opened fire after Taylor's boyfriend, Kenneth Walker, started shooting at them.

Cameron said on Wednesday that the police officers knocked and announced themselves before breaching the door to Taylor's apartment.