Greene published the video to her verified YouTube channel in January 2020, and promoted it on Facebook. However, the interaction happened on March 25, 2019, a day before a Senate hearing on a proposed "red flag" gun-control bill. It shows Greene trailing Hogg, who was then 18 years old, near the US Capitol, repeatedly asking him why he supports so-called "red flag" gun laws, and accusing him of "using kids" to "attack the Second Amendment."

Hogg continues walking and does not respond. Greene eventually stops following him.

Then, speaking to the camera, Greene alleges that Hogg was being "paid" to campaign for gun control with "George Soros funding and major liberal funding." Greene, who was not a congressperson at the time, expresses frustration that Hogg was able to get meetings with dozens of senators, while she could get none, and that he could garner media attention over the issue. Greene also calls Hogg a "coward" for not speaking to her.

In a Facebook post in January 2020, as she ran for office, Greene touted the 2019 confrontation to her supporters and branded Hogg a "notorious anti-gunner."

"Hogg wants to destroy the Second Amendment," Greene wrote. "I simply won’t put up with that."

The video went viral about a year later, on the morning of January 27, 2021, after being tweeted at Greene by Fred Guttenberg, whose daughter was among the victims of the shooting at Marjory Stoneman Douglas High School in Parkland, Florida, in 2018.

Guttenberg accused Greene of "insanity" and challenged her to speak to him. "I will answer all of your questions in person. Get ready to record again," he wrote.

March for Our Lives, a student-led gun-control advocacy organization formed in 2018 in the wake of the shooting at Marjory Stoneman Douglas High School in Parkland, Florida, also re-posted the video on its Facebook page on January 27, writing: "[Greene] has been spewing conspiracy theories about Parkland for years in an attempt to invalidate the trauma and pain that community felt, that our nation felt. She continues to harass survivors." 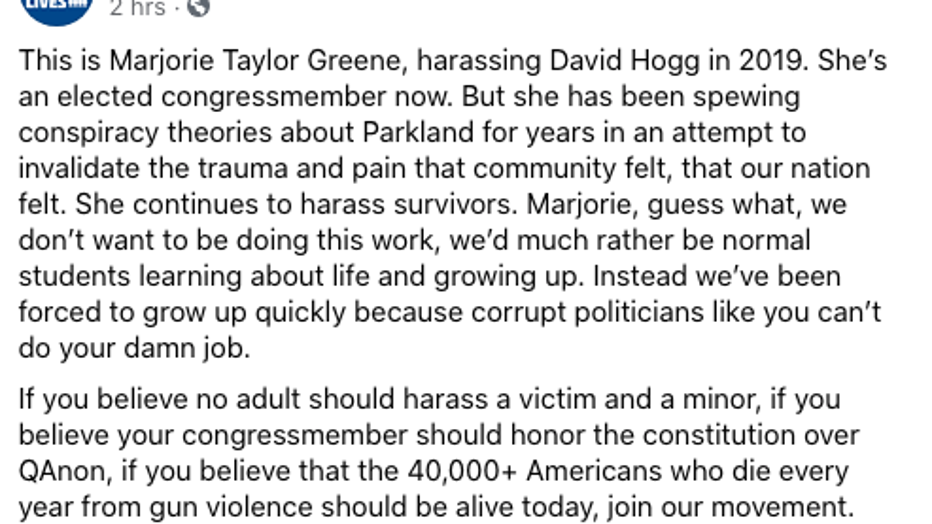 As the video went viral, Hogg tweeted: "It’s sad to think about how the unloved hate. People like [Greene], like most bullies, always try to attack and project strength because they are so badly hurting, so unloved and so insecure."

As Greene noted on Facebook in January 2020, she encountered Hogg in Washington twice. She also trailed him and other young gun-control activists inside the US Capitol, hectoring him over gun rights. She defended her actions in a YouTube discussion video posted on March 26, 2019.

"It’s the money behind them," Greene argued. "I’m not picking on a kid."