Advocates for those experiencing homelessness are calling on Fairfax County officials to provide more temporary housing for the unhoused population in the county.

RESTON, Va. - Advocates for those experiencing homelessness are calling on Fairfax County officials to provide more temporary housing for the unhoused population in the county.

This week, a Northern Virginia-based nonprofit, Reston Strong, set up tents outside the Hunter Mill District Supervisor's Office in protest.

Advocates say there’s a lack of temporary housing for the county’s homeless population.

The group has been outside since Monday, and they tell FOX 5 they plan to stay until a solution is reached. 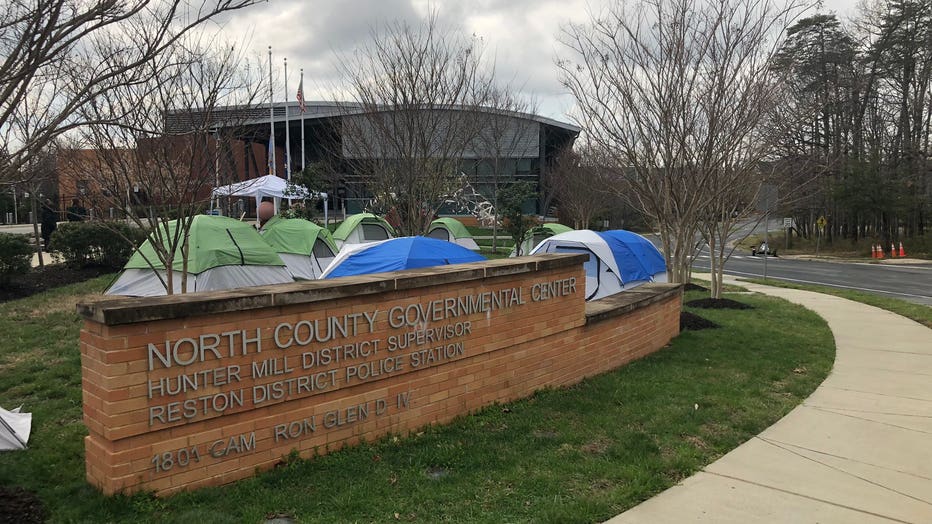 Currently, there are more than a dozen tents set up, with unhoused people residing in them.

Jessica Glazer, a mental health advocate with Reston Strong, says at the end of March, the hypothermia shelters in Reston closed, and shelters opened during the pandemic – leaving more than 100 people on the streets.

"There’s no space in the shelters at their current capacity for their limits on their programs, and they have nowhere to go," Glazer said.

FOX 5’s Perris Jones asked Glazer why the group decided to choose to protest outside a government building.

"We wanted to make sure it was seen," Glazer said. "If people weren’t feeling safe in hidden areas and so on we wanted to know they could be right here. People coming through would be able to see them and know this is a real issue, and we need help we need the support to get into housing."

According to Fairfax County’s Office to Prevent and End Homelessness, all of the county shelters are open and working with those experiencing homelessness. 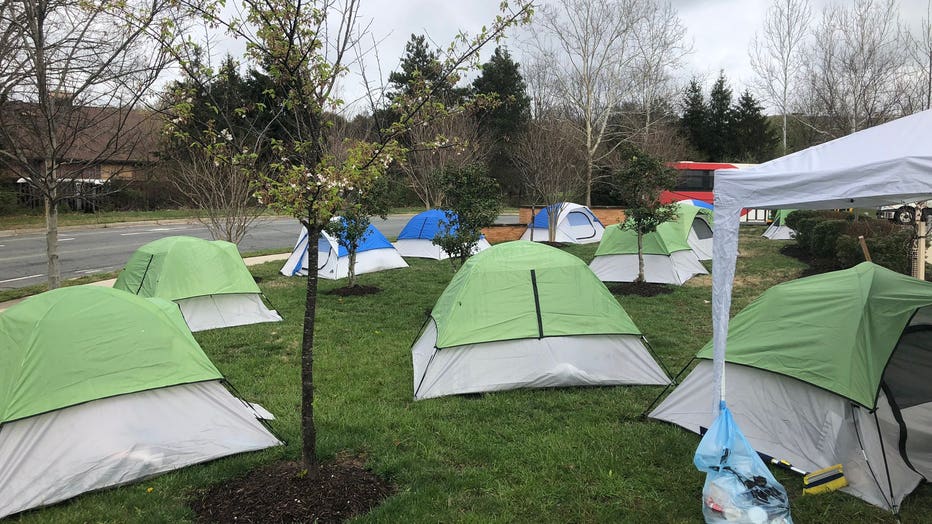 They sent FOX 5 the following statement:

"The Office to Prevent and End Homelessness, part of Fairfax County’s Department of Housing and Community Development, along with our partners in the Continuum of Care remain committed to the pursuit of sustainable solutions for the eradication of homelessness in Fairfax County. This includes providing a continuum of shelter, permanent supportive housing, and affordable housing with the supports and programs needed along the way to equip our neighbors with the skills and confidence to help them regain their footing and independence with dignity and care.

"Currently, all of our county shelters are open, and we are actively working with individuals who are experiencing homeless.

"This is truly a community-wide enterprise. We are profoundly grateful for the partnership of countless nonprofit organizations, faith communities, and other civic and volunteer organizations for their unwavering support in serving individuals and families experiencing homelessness in Fairfax County. "

However, Glazer said they need more temporary housing in Reston specifically because those staying in the tents work in Reston, and they want to make sure there’s a shelter near their jobs.

"They trust us to leave their stuff in their tents otherwise they’re carrying around seventy, eighty-pound backpacks rolling suitcases trying to get to work and back," Glazer said. "We have the gauntlet of professions we have certified professionals, we have individuals with master’s degrees, and therapist we have fast food workers; we have parks department; it’s not just people being lazy and don’t want to work."

The group says they’re still waiting for answers from the county board of supervisors on two requests: modification to the county’s zoning ordinance to allow for temporary transitional housing in vacant commercial spaces and a dedicated mobile health crisis unit based in Reston.

Man charged in attacks of homeless men in DC, NYC being held without bond

"On the long road to prevent and end homelessness, I appreciate the help from Reston Strong to bring renewed public attention to the needs of Reston’s unhoused – and to bring a renewed sense of urgency.  Using federal pandemic funds, and in response to direction from me and my colleagues on the Board of Supervisors, Fairfax County was able to house nearly 2,000 residents needing safe shelter in hotels over the past 24 months. While the initial focus was to protect the health of this community during the pandemic, the county and nonprofit partners provided extensive support services, including assisting with placement of 745 residents from hotel rooms into permanent housing with family and friends, subsidized housing, and other resources.

"It should be noted that even before the pandemic, the ending of the winter hypothermia shelter program during the past decade has been a challenge for our unhoused needing overnight shelter. The end of the two-year hoteling program last month made this year much more difficult. While I pushed to extend the hoteling program later into the spring, the lack of trained staff to manage this program caused the program to end.

"While the hoteling and other "band-aid" solutions are important, it is imperative for all to understand that the underlying challenge is a severe lack of affordable housing, not just for the chronically homeless and other residents sheltering in tents but also for our essential workers.  Reston is not alone in this challenge – it is countywide, regionwide, and nationwide.

"I have asked our Office to Prevent and End Homelessness to ramp up efforts to find housing options for all who have asked for help, as well as to those sleeping outside who have not asked for housing.  As for Reston Strong’s request to place port-a-johns on site, I have also confirmed that bathroom facilities in the Embry Rucker shelter by my office are available 24/7.

"While I enthusiastically embrace the political message and support Reston Strong’s right to direct political action, I do not support allowing the creation of a new tent city with the biohazards and assaults experienced by the community several years ago. With the passage of time, this has proved counterproductive in our collective efforts to fund, site, and build permanent affordable housing.  We need to move forward with a badly needed new homeless shelter, permanent supportive housing, and affordable housing for working families."