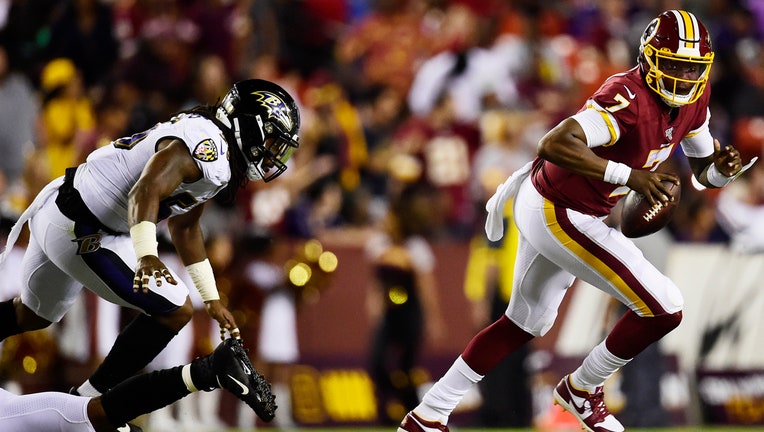 LANDOVER, MD - AUGUST 29: Dwayne Haskins #7 of the Washington Redskins scrambles with the ball in the second quarter against the Baltimore Ravens during a preseason game at FedExField on August 29, 2019 in Landover, Maryland. (Photo by Patrick McDerm

LANDOVER, Md. - Dwayne Haskins and Robert Griffin III embraced at midfield, and the Washington Redskins' one-time quarterback of the future had some kind words for the current hope of the franchise.

"He thinks I'm going to be a really good quarterback one day," Haskins said. "It means a lot for me hearing that from him."

On the same field Griffin shined as a rookie and injured his knee to begin his fall from grace, Haskins showed flashes of why the Redskins believe he's their future.

The 15th overall pick out of Ohio State completed 10 of 17 passes for 104 yards and a touchdown Thursday in Washington's 20-7 loss to the Baltimore Ravens in each team's preseason finale.

"I felt great out here today, just the atmosphere, go out there being a leader and talking to the guys," Haskins said. "That's the most important thing I had out today out there was just having fun, be a leader on and off the field and just trying to make the plays."

Working behind a second-string offensive line, Haskins missed a handful of throws and had a few passes wiped out by penalties but got the snaps coach Jay Gruden wanted after naming veteran Case Keenum the Week 1 starting quarterback.

Haskins was 4 of 5 for 70 yards on an eight-play, 75-yard scoring drive capped off with a TD pass to receiver Steven Sims, who impressed on offense and special teams in his final showcase to make Washington's initial roster.

"He's a little fireball," Redskins coach Jay Gruden said of Sims. "He's fun to watch. Every time he gets the ball in his hands, he's exciting."

Assuming Colt McCoy remains sidelined with the lingering effects of surgery on a broken right leg, Haskins figures to back up Keenum against Philadelphia in the regular-season opener. Haskins flashed his cannon arm against Baltimore, though that was never in doubt and Washington's staff wants to see him polish his footwork and game-management skills.

Far less-touted rookie Trace McSorley went 15 of 27 for 171 yards and a touchdown to make his case for Baltimore to keep another quarterback along with starter Lamar Jackson and backup Robert Griffin III. McSorley engineered a 13-play, 69-yard drive that finished with a perfect over-the-shoulder pass to Jaleel Scott for a TD.

McSorley, a sixth-round pick out of Penn State, could get a roster spot in part because Griffin missed the entire preseason with a broken right thumb. Griffin is expected to be ready for Week 1.

"I don't think it's a matter of whether Trace has earned a place in the team," coach John Harbaugh said. "He would have a role for us. Just a matter of strategy right now."

Linebacker Cassanova McKinzy getting a concussion in the first quarter and being ruled out for the rest of the game could have a trickle-down effect on the Redskins' 53-man roster. McKinzy was expected to be one of four outside linebackers on the roster, and his status could change the numbers game ahead of cuts Saturday.

With big decisions to make at wide receiver, cornerback and along the offensive line, Washington might have to take a hit elsewhere to keep — or sign — another outside linebacker at least for Week 1 at Philadelphia.

ALL THEY DO IS WIN

The Ravens finished the preseason undefeated for the fourth consecutive year and extended their exhibition winning streak to 17 games. Their previous preseason loss came Sept. 3, 2015.

"Obviously going undefeated in the preseason, winning games ,that's kind of the big goal, and at the end of the day the main one," McSorley said.

Ravens open the regular season at the Miami Dolphins on Sunday, Sept. 8.

Redskins visit the Philadelphia Eagles on Sept. 8 as the first of two NFC East games to start the season.