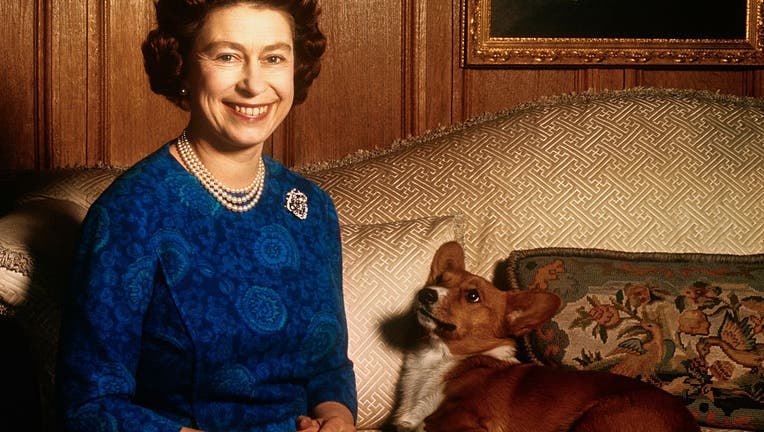 Britain's Queen Elizabeth II smiles radiantly during a picture-taking session in the salon at Sandringham House. Her pet dog looks up at her. These photos were taken in connection with the royal Family's planned tour of Australia and New Zealand.

When Queen Elizabeth died on Thursday, Sept. 8 at the age of 96, she left behind four beloved pets — two of those were her well-known corgis. The breed has been now forever linked to the queen.

With her passing came public concern over who will care for the beloved dogs, one of which was given to the queen on the 100th birthday of her late husband Prince Philip.

Sky News reported Sunday, according to a palace spokesman, that the corgis will go live with Prince Andrew, the queen’s third child, and his ex-wife Sarah Ferguson.

The queen’s father, George VI, introduced corgis to the royal family in 1933 when he bought one called Dookie. The animal proved popular with his daughters, and the queen was given her first corgi, Susan, for her 18th birthday.

She owned over 30 corgis during her reign — many were direct descendants from Susan. Elizabeth also introduced a new breed of dog known as the "dorgi" when one of her corgis was mated with a dachshund named Pipkin.

Throughout Elizabeth's 70 years on the throne, the corgis were by her side, accompanying her on official tours, reportedly sleeping in their own room at Buckingham Palace with daily sheet changes, and occasionally nipping the ankles of the odd visitor or royal family member.

Three of them even appeared alongside the queen as she climbed into James Bond’s waiting helicopter in the spoof video that opened the 2012 Summer Olympics in London.

Princess Diana once called them a "moving carpet" as they were always by her mother-in-law's side.

The corgis were also present when the queen welcomed visitors at the palace, including distinguished statesmen and officials. When the conversation lulled, Elizabeth would often turn her attention to her dogs to fill the silence.

"She was also concerned about what would happen to her dogs when she is no longer around," British author Penny Junor wrote, noting that some royal family members did not share her fondness for the corgis.

Junor documented their feisty lives in a 2018 biography "All the Queen’s Corgis."

RELATED: What is 'Operation London Bridge'? All about King Charles III's succession, accession and coronation

After the death of her corgi Willow in 2018, it was reported that the queen would not be getting any more dogs.

But that changed during the illness of her late husband, Prince Philip, who died in 2021 at age 99. She turned once again to her beloved corgis for comfort. On what would have been Philip's 100th birthday last year, the queen was reportedly given another dog.

In addition to her human family, Elizabeth is survived by two corgis, a dorgi, and a cocker spaniel.

This story was reported from Detroit. The Associated Press and FOX Television Stations’ Austin Williams contributed.