Zelensky criticizes calls for Ukraine to cede territory to Russia

In a video posted to his social media channels on May 25, Zelensky said Ukraine’s interests must not be ignored in a hurried effort to bring peace. Credit: Volodymyr Zelensky via Storyful

KRAMATORSK, Ukraine - As Russia asserted progress in its goal of seizing the entirety of contested eastern Ukraine, President Vladimir Putin tried to shake European resolve Saturday to punish his country with sanctions and to keep supplying weapons that have supported Ukraine's defense.

The Russian Defense Ministry said Lyman, the second small city to fall to Russia this week, had been "completely liberated" by a joint force of Russian soldiers and Kremlin-backed separatists, who have waged war for eight years in the industrial Donbas region bordering Russia. It was

Ukraine’s train system has ferried arms and evacuated citizens through Lyman, a key railway hub in the country's east. Control of it also would give Russia's military another foothold in the region; it has bridges for troops and equipment to cross the Siverskiy Donets river, which has so far impeded the Russian advance into the Donbas.

The Kremlin said Putin held an 80-minute telephone call Saturday with the leaders of France and Germany in which he warned against the continued transfers of Western weapons to Ukraine and blamed the conflict’s disruption to global food supplies on Western sanctions. 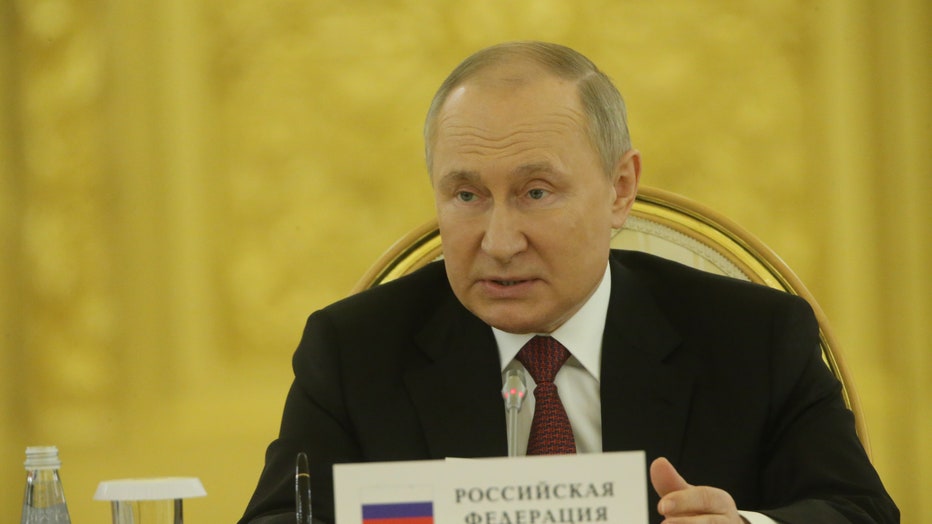 MOSCOW, RUSSIA - MAY,16 (RUSSIA OUT) Russian President Vladimir Putin speaks during the Summit of Collective Security Treaty Organisation (CSTO) at the Grand Kremlin Palace, May,16,2022, in Moscow, Russia. (Photo by Contributor/Getty Images)

German Chancellor Olaf Scholz and French President Emmanuel Macron urged an immediate cease-fire and a withdrawal of Russian troops, according to the chancellor’s spokesperson. Both urged Putin to engage in serious direct negotiations with Ukrainian President Volodymyr Zelenskyy to end the fighting, the spokesperson said.

A Kremlin readout of the call between Macron, Putin and Scholz phone call said the Russian leader affirmed "the openness of the Russian side to the resumption of dialogue." The three leaders agreed to stay in contact, according to the readout.

But Russia’s recent progress in Donetsk and Luhansk, the two provinces that make up the Donbas, could further embolden Putin. Since failing to occupy Kyiv, Ukraine’s capital, Russia has set out to seize the last parts of the region not controlled by the separatists.

"If Russia did succeed in taking over these areas, it would highly likely be seen by the Kremlin as a substantive political achievement and be portrayed to the Russian people as justifying the invasion," the British Ministry of Defense said in a Saturday assessment.

Russia has intensified efforts to capture the larger cities of Sievierodonetsk and nearby Lysychansk, which are the last major areas under Ukrainian control in Luhansk province. Zelenskyy called the situation in the east "difficult" but expressed confidence his country would prevail with help from Western weapons and sanctions. 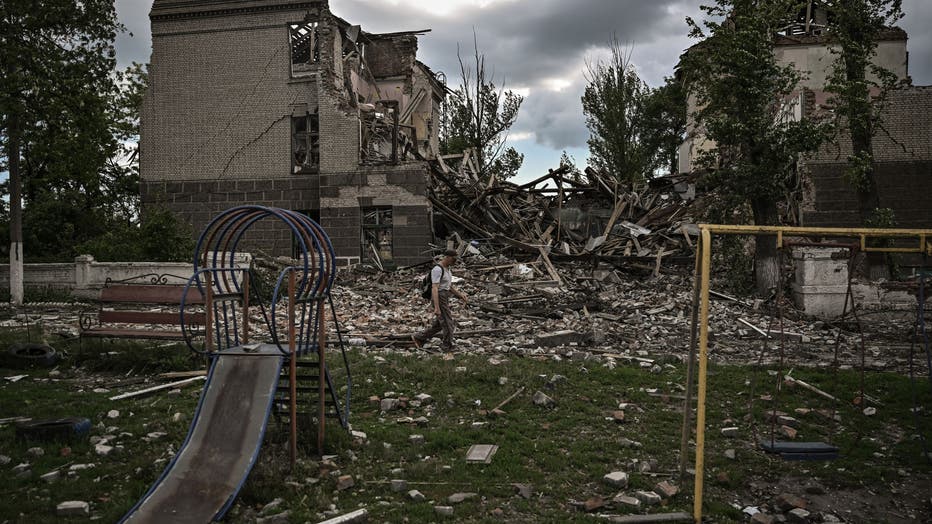 A man walks in front of a destroyed school in the city of Bakhmut, in the eastern Ukranian region of Donbas on May 28, 2022, on the 94th day of Russia's invasion of Ukraine. (Photo by ARIS MESSINIS/AFP via Getty Images)

"If the occupiers think that Lyman or Sievierodonetsk will be theirs, they are wrong. Donbas will be Ukrainian," he said.

The governor of Luhansk reported that Ukrainian fighters repelled an assault on Sievierodonetsk but Russian troops still pushed to encircle them. Speaking on Ukrainian TV later Saturday, Gov. Gov. Serhii Haidai said the Russians had seized a hotel on the outskirts of Sievierodonetsk.

Sievierodonetsk Mayor Oleksandr Striuk said Friday that some 1,500 civilians in the city with a prewar population of around 100,000 have died there during the war, including from a lack of medicine or because of diseases that could not be treated.

The advance of Russian forces raised fears that residents would experience the same horrors as people in the southeastern port city Mariupol in the weeks before it fell. Residents who had not yet fled faced the choice of risking it now or staying behind.

Svetlana Lvova, the manager of two buildings in Bakhmut, tried to convince reluctant residents to leave but said she and her husband would not evacuate until their son, who was in Sieverodonetsk, returned home.

On Saturday, people who managed to flee Lysychansk described intensified shelling, especially over the past week, that left them unable to leave basement bomb shelters at all. 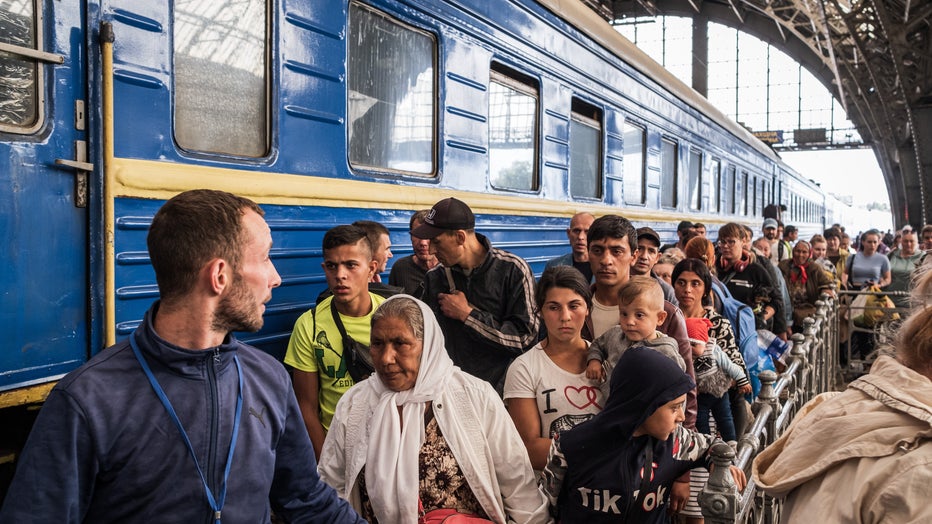 LVIV, UKRAINE - MAY 28: An evacuated train with people from the Donetsk region arrives at the railway station in Lviv, Ukraine on May 28, 2022. (Photo by Adri Salido/Anadolu Agency via Getty Images)

Yanna Skakova said she left the city on Friday with her 18-month-old and 4-year-old sons. She cried as she sat on a train bound for western Ukraine. She said her husband stayed behind to take care of their house and animals.

"It’s too dangerous to stay there now," she said, wiping away tears.

A nearly three-month siege of Mariupol ended last week when Russia claimed complete control of the city. Mariupol became a symbol of mass destruction and human suffering, as well as of Ukrainian determination to defend the country.

The Kremlin said that Putin had emphasized to Macron and Scholz that Russia was working to "establish a peaceful life in Mariupol and other liberated cities in the Donbas."

Russian-held areas of Ukraine’s southern Kherson region have switched to Moscow time and "will no longer switch to daylight-saving time, as is customary in Ukraine," Russia’s state RIA Novosti agency quoted Krill Stremousov, a Russian-installed local official, as saying Saturday.

The war in Ukraine has caused global food shortages because the country is a major exporter of grain and other commodities. Moscow and Kyiv have traded accusations over which side was responsible for keeping shipments tied up in ports, with Russia saying Ukrainian sea mines prevented safe passage and Ukraine citing a Russian naval blockade.

The press service of the Ukrainian Naval Forces said two Russian missile carriers "capable of carrying up to 16 missiles" were ready for action in the Black Sea. It said that only shipping routes which had been established through multilateral treaties could be considered safe.

As Ukraine attempts to fend off the Russian invasion, the country’s officials have pressed Western nations for more sophisticated and powerful weapons. The U.S. Defense Department would not confirm a Friday CNN report saying the Biden administration was preparing to send long-range rocket systems to Ukraine.

Russia’s ambassador to the United States, Anatoliy Antonov, on Saturday branded such a move as "unacceptable" and called on the Biden administration to "abandon statements about the military victory of Ukraine." 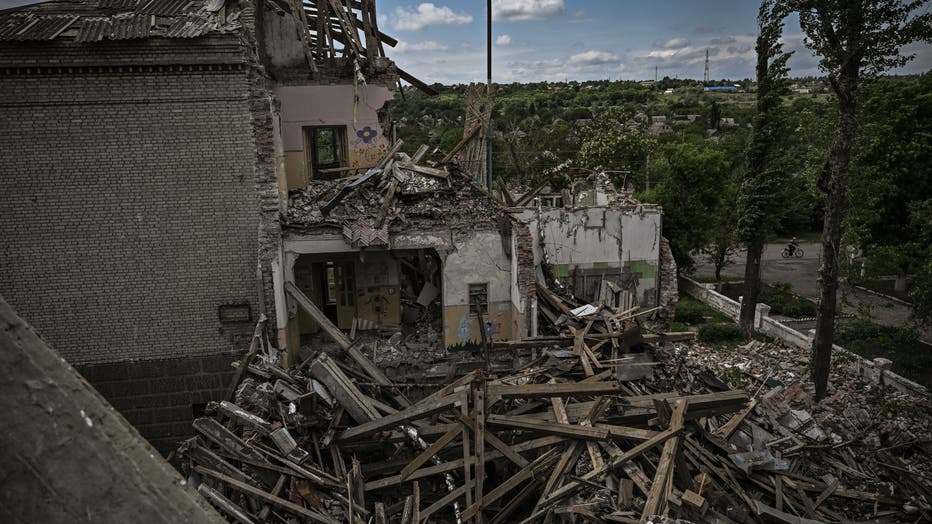 A picture taken on May 28, 2022, shows a destroyed school in the city of Bakhmut, in the eastern Ukranian region of Donbas, on the 94th day of Russia's invasion of Ukraine. (Photo by ARIS MESSINIS/AFP via Getty Images)

A Telegram post published on the Russian embassy’s official channel cited Moscow’s top diplomat in Washington as saying "the unprecedented pumping of weapons into Ukraine significantly increases the risks of an escalation of the conflict."

Moscow is also trying to spook Sweden and Finland’s determination to join NATO. Russia’s Defense Ministry said its navy successfully launched a new hypersonic missile from the Barents Sea. The ministry said the recently developed Zircon hypersonic cruise missile had struck its target about 1,000 kilometers away.

If confirmed, the launch could spell trouble for NATO voyages in the Arctic and North Atlantic. Zircon, described as the world’s fastest non-ballistic missile, can be armed with either a conventional or a nuclear warhead, and is said to be impossible to stop with current anti-missile defense systems.

Moscow’s claims, which could not be immediately verified, came a week after Defense Minister Sergey Shoigu announced that Russia would form new military units in the west of the country in response to Sweden and Finland’s bids to join NATO.