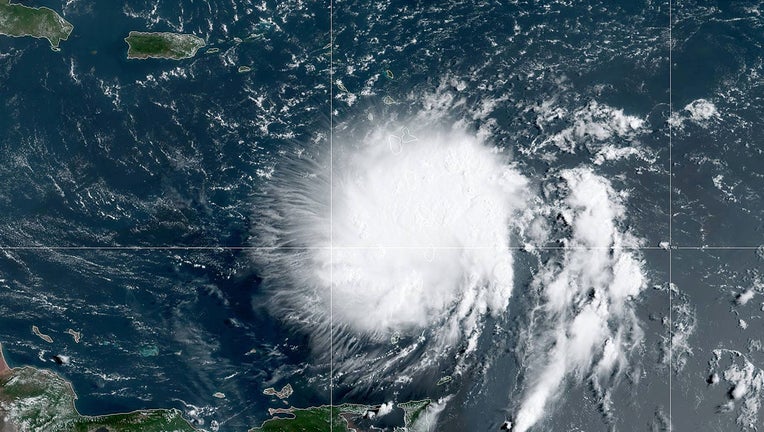 Tropical Storm Dorian, as seen by a GOES satellite Tuesday morning. Puerto Rico is in the upper-left of the image. (NOAA/NESDIS)

SAN JUAN, Puerto Rico - Tropical Storm Dorian was dumping rain Tuesday on the Windward Islands of the eastern Caribbean, gathering power on a path to brush past Puerto Rico's southwest coast and hit the eastern Dominican Republic on Wednesday at near hurricane strength.

A still-uncertain long-term track showed the storm near Florida over the weekend.

Lady Sees Crying Man Forced To Throw Package In Airport Trash. What She Digs Out Sparks A Massive SearchIcePop

The U.S. National Hurricane Center issued a hurricane watch for Puerto Rico and for the Dominican Republic from Isla Saona to Samaná and tropical storm warnings for Martinique and St. Vincent and the Grenadines. The center said the storm has maximum sustained winds near 50 miles per hour and is forecast to strengthen during the next 48 hours before passing near or south of the U.S. territory.

The storm knocked out power overnight in Barbados, where crews began clearing downed trees and repairing the electrical grid early Tuesday. Jackie Marshall-Clarke, a spokeswoman for Barbados Light & Power, said on state-owned TV that many communities in the island's northern region were without electricity.

Government officials said that by Tuesday morning, public transportation would resume and businesses would reopen.

Minister of Home Affairs Edmund Hinkson said Dorian "is said to be weakening and that is great news, but we are not out of danger yet."

The storm was expected to dump between 3 to 6 inches of rain in the Windward Islands, with isolated amounts of 10 inches.

Tropical storm watches were in force for Dominica, Grenada, Saba, St. Eustatius and parts of the Dominican Republic from Isla Saona to Punta Palenque and from Samaná to Puerto Plata. 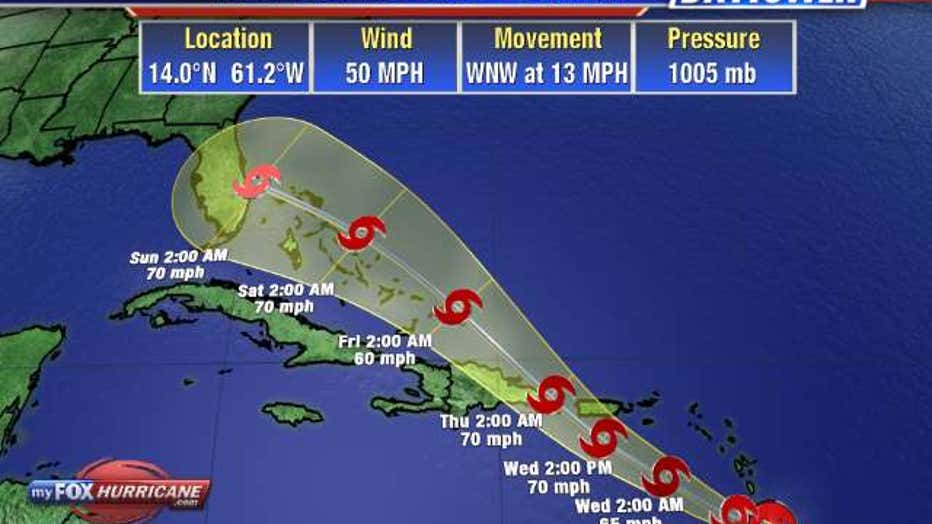 In St. Lucia, Prime Minister Allen Chastanet said "we are expecting the worst" and announced that everything on the island of nearly 179,000 people would shut down Monday evening ahead of the storm, but it remained below hurricane strength early Tuesday.

In Puerto Rico, some grocery stores had run out of bottled water as people rushed to buy supplies including generators and filled their cars with gas. Many are worried about power outages and heavy rains on an island still struggling to recover from Hurricane Maria, a Category 4 storm that hit in September 2017. Some 30,000 homes still have blue tarps as roofs and the electrical grid remains fragile and prone to outages even during brief rain showers.

"The biggest problem will be the rain," said Roberto García, a forecaster with the National Meteorological Service in Puerto Rico.

On Monday, Puerto Rico Gov. Wanda Vázquez signed an executive order declaring a state of emergency and provided a list of all the new equipment that public agencies have bought since Hurricane Maria.

"I want everyone to feel calm," she said. "Agency directors have prepared for the last two years. The experience of Maria has been a great lesson for everyone."

She said public schools would close Tuesday afternoon and that at least one cruise ship canceled its trip to Puerto Rico. She said those without a proper roof can stay in one of the 360 shelters around the island.

Also on Monday, a new tropical depression formed between the U.S. eastern coast and Bermuda. It was located about 365 miles southeast of Cape Hatteras in North Carolina and was moving east at 2 mph with maximum sustained winds of 35 mph. It was expected to become a tropical storm by Tuesday night and continue blowing off the U.S. East Coast this week on a path to Canada's North Atlantic provinces.