President Donald Trump has given officials the green light to look at whether an anti-malaria drug can be used to treat coronavirus.

WASHINGTON (AP) - President Donald Trump focused attention on possible treatments for the new coronavirus on Thursday, citing potential use of a drug long used to treat malaria and some other approaches still in testing.

At a White House news conference, Trump and Food and Drug Administration Commissioner Dr. Stephen Hahn cited the malaria drug chloroquine, along with remdesivir, an experimental antiviral from Gilead Sciences, and possibly using plasma from survivors of COVID-19, the disease the new virus causes.

Those treatments are among several being tested that might ease symptoms but do not stop the virus from spreading.

Also on Thursday, Swiss drugmaker Roche said it was working with the U.S. government to start a study of Actemra, a drug used now for rheumatoid arthritis and some other conditions, against the coronavirus.

"We're looking at drugs that are already approved for other indications" as a potential bridge or stopgap, Hahn said, while also doing rigorous studies to see if the drugs truly make a difference versus usual care, and if they are safe when used for a new purpose.

“We want to make sure this is done well and right,” he said.

No drug is specifically approved now for treating COVID-19.

Chloroquine and a similar drug — hydroxychloroquine, sold as Plaquenil by French drugmaker Sanofi and in generic form — are available now and can be used off-label in the United States. They may interfere with the coronavirus being able to enter cells, and some scientists have reported possible encouraging signs in test-tube and other small studies. 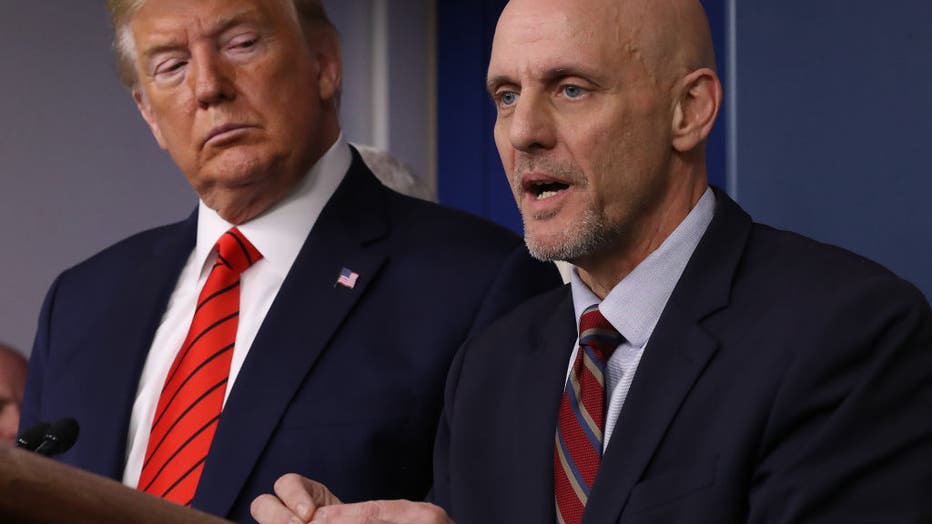 German drugmaker Bayer has said it would donate 3 million tablets of its chloroquine drug, Resochin, for use against coronavirus. That drug was never approved in the U.S., so Bayer is working with federal agencies to get an emergency-use authorization.

Chloroquine and remdesivir are among the drugs the World Health Organization said would be tried in a five-part international study announced Wednesday.

Already approved drugs are tempting for doctors to use off label, but formal studies are needed to see if they truly work for a new purpose or disease, said Dr. Ross McKinney Jr., chief scientific officer for the Association of American Medical Colleges, which represents about 400 major teaching hospitals across the country.

Chloroquine may look promising in a test tube, but “I'm skeptical it will be effective” in patients, he said Thursday in a call with reporters.

Remdesivir interferes with virus reproduction and has shown some promise in lab and animal studies against other coronaviruses that cause similar diseases, MERS and SARS.

It's being tested in at least five separate experiments, and Gilead also has given it to several hundred severely ill patients in the U.S, Europe and Japan under "compassionate use" provisions. That includes three of the first dozen COVID-19 patients in the United States. They recovered, but it's impossible to know whether they would have anyway without the drug.

On a podcast Wednesday with a medical journal editor, the National Institutes of Health's Dr. Anthony Fauci said China had enrolled several hundred people in its two remdesivir studies but is having trouble recruiting more because many patients just want the drug and are unwilling to take a chance on being randomly assigned to a comparison group that just gets usual care.

It would be great if an independent monitoring board could look at results so far and see if there are signs of safety or effectiveness, Fauci said.

"We desperately need the data" on this and other drugs being tested in rigorous scientific studies, Fauci said. "We've got to be able to determine if they work and if they're safe."

Apart from the studies in China, Fauci's agency is running a study of remdesivir that aims to recruit 400 patients in the U.S. and elsewhere. That study is "adaptive," meaning it will allow scientists to add other drugs under the same testing umbrella as time goes on. Gilead also has said it will do two studies testing remdesivir treatment for five or 10 days in about 1,000 hospitalized patients primarily in Asia.

Remdesivir "does look like it could be promising," said Dr. Daniel Kuritzkes, chief of infectious diseases at Brigham and Women’s Hospital in Boston. In animal tests, it was "quite effective at preventing infection" and reducing severity of illness and damage to the lungs when given early enough in the course of illness, he said.

"It interferes with the enzyme that reproduces the genetic material of the virus" and acts at an earlier step than protease inhibitors such as lopinavir and ritonavir, which are used now to treat HIV and also are being tested against the new coronavirus, Kuritzkes explained.

The HIV drugs gave disappointing results, failing to shorten illness in a study of 199 severely ill hospitalized patients in China, scientists from that country reported Wednesday in the New England Journal of Medicine.

Some other studies testing the HIV drug combo are still underway.

The Roche drug, Actemra, is used now for rheumatoid arthritis and some other conditions. It targets interleukin-6, which plays a role in inflammation. Roche's U.S. subsidiary, Genentech, said Thursday that it was working with the FDA to start a 330-patient study on hospitalized COVID-19 patients in April.

Regeneron Pharmaceuticals says it will lanch a study of Kevzara, its rheumatoid arthritis drug that also targets interleukin-6, against the coronavirus.

A Japanese company, Fujifilm Toyama Chemical, says tests suggest its drug favipiravir, used to treat the flu in Japan, shows promise against the coronavirus, though no large studies of that have been published yet.

Other companies are developing monoclonal antibodies, proteins that specifically fight the coronavirus. Antibodies or combinations of them were tried against Ebola, and doctors think a similar approach may help against the new virus.

Finally, some doctors have urged collecting plasma from people who have survived COVID-19, because they should have made natural antibodies to the virus that could be given to people to help their immune systems fight it off.