WASHINGTON - The White House said on Tuesday that President Joe Biden is deliberating whether to extend the pause on federal student loan payments and forgive a portion of student debt per borrower.

The ongoing deliberations come ahead of a pandemic-related moratorium on payments that is set to expire at the end of August. Not coincidentally, that is the deadline the president has set for making a decision on the matter. The pause on student loan payments – and a freeze on interest – has been in place since March 2020.

On Monday, the Wall Street Journal reported that student loan servicing contractors have been told to not send billing statements. Similarly, in April, before President Biden announced the most recent extension on the pause, the U.S. Department of Education asked companies not to send out notices about resuming payments.

During the regular White House briefing on Tuesday, a reporter asked press secretary Karine Jean-Pierre about the length of time it is taking for the president to make a decision, and whether the rising cost of living is playing a factor in deliberations.

"Look, the president understands firsthand how burdensome this could be for many Americans across the country," Jean-Pierre said. "That's why when it comes to loan debt, that's why he took the action that he did when it came to pausing repayment."

Jean-Pierre said she did not have anything more to share on loan cancellation. The White House has previously indicated that it is coming near to a decision on broad student loan debt forgiveness. The administration has reportedly zeroed in on canceling $10,000 per borrower but has not yet reached a final decision. 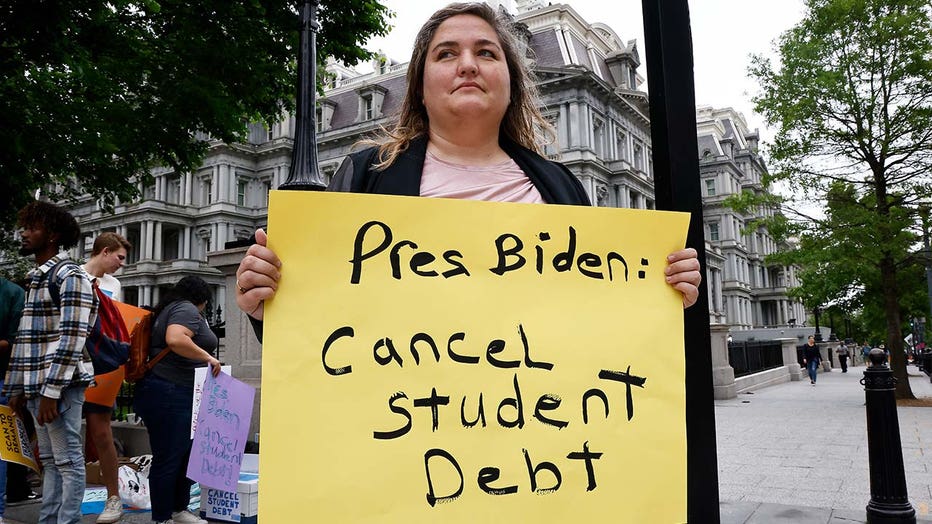 WASHINGTON, DC - MAY 12: Student loan borrowers gather near The White House to tell President Biden to cancel student debt on May 12, 2020 in Washington, DC. (Photo by Paul Morigi/Getty Images for We, The 45 Million)

The pause on student loan payments was first enacted in March 2020 near the beginning of the coronavirus pandemic under President Trump. It has been extended multiple times since.

An estimated 43 million Americans carry student loans worth $1.6 trillion, according to federal figures.

RELATED: Nearly half of Americans will take on debt this year despite higher borrowing costs: survey

Nearly all of the cancellations through the Public Service Loan Forgiveness Program have come since last October, when the government temporarily relaxed the complex requirements. Before that, the program had rejected more than 90% of applicants, the Department of Education said in 2019.

Teachers, librarians, nurses, public interest lawyers, military members and other public workers all qualify, along with people who work for non-profits.

So far, the forgiveness totals almost $8.1 billion in federal loans, but that amount is just a fraction of the debt that could qualify. The average amount of debt forgiven through the program is $64,968.