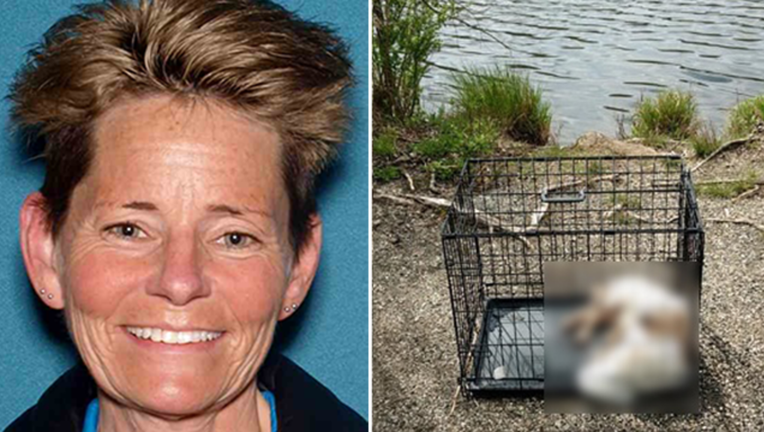 WEST MILFORD, N.J. (FOX 29) - A woman has been charged with the death of a 10-week-old puppy, who was discovered inside a weighted cage submerged in a New Jersey pond, police announced Tuesday.

Tonya Fea, 47, of Jefferson Township, has been charged with two counts of animal cruelty, both third-degree offenses, as well as defiant trespassing.

A rescue officer at The Last Resort Rescue, a Passaic County nonprofit, reportedly discovered the crate at Greenwood Pond off Bonter Road on Tuesday, April 30. The puppy was "ice cold," soaked inside the crate, according to the rescue.

Lakebed vegetarion was reportedly hanging on the crate, with a crystal vase and puppy training pads stuck to the side of the puppy's head with a small amount of blood on them. A $22 price tag could be seen on the bottom of the vase.

"The official autospy report confirm[s] that drowning was the cause of death," the rescue wrote on Facebook. "Jenny was ALIVE and was intentionally drowned by this monster."

The rescue says it is working with investigators to ensure the two people responsible for the tip that led to Fea's arrest receive the $12,000 reward offered by the nonprofit.

Fea faces a maximum of five years in state prison for each animal cruelty charge, plus a maximum of 30 days in county jail for defiant trespassing. She has been released pending a May 22 court date.

Anyone with additional information regarding this case is urged to contact the Passaic County Prosecutor's Office tip line by calling 1-877-370-PCPO or emailing. Tips can also be sent to West Milford Det. Eric Darnsteadt by calling 973-728-2801.

Those interested in donating to the Last Resort Rescue can do so here.