Young boy calls police to show them his toys

A 4-year-old New Zealand boy who dialed the emergency number to ask the police to come and see his toys was surprised with a special visit from an office.

INVERCARGILL, New Zealand - A 4-year-old boy in New Zealand who made an emergency call asking for police to come over and see his toys was surprised by a visit from an officer who confirmed that his toys are, in fact, pretty cool.

The call was released on Oct. 15 by the Southern Police District, which wrote on Facebook that while it doesn't encourage children to call the emergency number "to show us their toys, this was too cute not to share."

In the call, it begins as normal: "This is police, where is the emergency?"

"Police lady?" the boy says in the recording.

"Yes," the dispatcher says, changing to a friendlier tone. "What’s going on?"

"Um, can I tell you something?" the boy asks, and then adds, "I've got some toys for you."

"You've got some toys for me?" says the dispatcher.

"Yep. Come over and see them," the boy replies.

A man is then heard on the line explaining to the dispatcher that the call was a mistake, saying the boy had been helping out while his mother was sick and "snuck out" to make the call.

Police dispatch then put out a call for any available units to visit the home: "There is a 4-year-old there who is wanting to show police his toys, over." 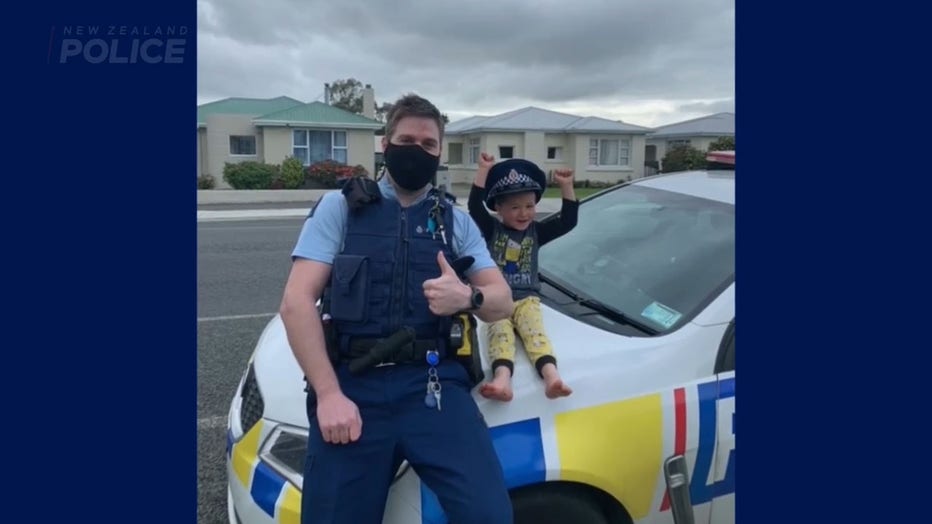 In this photo released by New Zealand Police, an officer identified as Constable Kurt sits on his patrol car with the 4-year-old boy in the South Island city of Invercargill, New Zealand, on Oct. 15, 2021. (Credit: Southern Police District via Storyf

An officer, identified as Constable Kurt, arrived at the boy's house in the South Island city of Invercargill. Police said he was shown an "array of toys" and in turn showed the boy the patrol car with the lights on – and gave the child and his parents an "educational chat" about using 111 for emergencies only.

"He did have cool toys," Constable Kurt reported back after visiting the home, according to police.