The FDA has formally approved Pfizer-BioNTech's COVID-19 vaccine for all individuals 16 and older.

WASHINGTON - The U.S. Food and Drug Administration granted full approval Monday to Pfizer-BioNTech’s COVID-19 vaccine, calling it a "milestone" that may help to increase public confidence in the shots as the country faces a resurgence of virus cases and record hospitalizations.

The two-dose vaccine, which will now be marketed as Comirnaty, now carries the strongest endorsement from the FDA, which has never before had so much evidence to judge a shot’s safety. More than 200 million Pfizer doses already have been administered in the U.S. — and hundreds of millions more worldwide — since emergency use began in December 2020.

President Joe Biden said Americans who have been waiting on full FDA approval of a COVID-19 vaccine "should go get your shot now."

"If you’re one of the millions of Americans who said that they will not get the shot until it has full and final approval of the FDA, it has now happened. The moment you’ve been waiting for is here," Biden said in remarks from the White House.

A decision had been expected by early 2022 after U.S. regulators agreed to a "priority review" of Pfizer’s application in July, though many were expecting the decision to come much sooner given how closely the agency has been monitoring the vaccine’s widespread use.

The FDA called the vaccine’s approval a "key achievement for public health."

"The FDA’s approval of this vaccine is a milestone as we continue to battle the COVID-19 pandemic," said acting FDA Commissioner Janet Woodcock in a statement. "While this and other vaccines have met the FDA’s rigorous, scientific standards for emergency use authorization, as the first FDA-approved COVID-19 vaccine, the public can be very confident that this vaccine meets the high standards for safety, effectiveness, and manufacturing quality the FDA requires of an approved product." 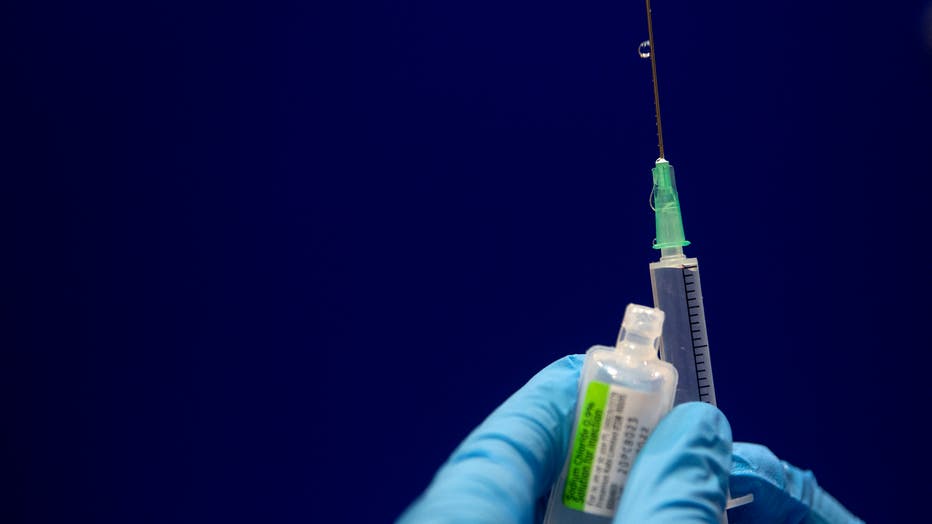 Sodium chloride is measured to be added to a phial of the Pfizer/BioNTech COVID-19 vaccine concentrate ready for administration. (Photo by Victoria Jones/Pool/AFP via Getty Images)

The U.S. becomes the first country to fully approve the shot, according to Pfizer, and CEO Albert Bourla said in a statement he hoped the decision "will help increase confidence in our vaccine, as vaccination remains the best tool we have to help protect lives."

Pfizer’s application for full approval, which was submitted in late May, included the latest data from a large study that tracked participants 16 and older for six months after their second dose. Pfizer’s shot still has emergency authorization for 12- to 15-year-olds in the U.S., and the company also intends to submit data needed for full approval in that age group.

The emergency-use authorization (EUA) last winter allowed Pfizer’s vaccines to be administered before receiving full approval. The difference between EUA and full FDA approval is that they require different clinical studies, with full FDA approval requiring a longer monitoring period.

Since that time, the two-dose shot regiment — along with vaccines from Moderna and Johnson & Johnson — has drastically improved the United States’ pandemic response. The winter surge that resulted in as many as 300,000 new cases in a single day sharply declined, as did the country’s hospitalization and death rates.

Even so, EUA is only valid for the duration of the health emergency — which is why vaccine manufacturers have sought full approval.

Pfizer first had to submit nonclinical and clinical data to the FDA in a process known as the Biologics License Application (BLA). That process can take several weeks to complete.

Pfizer then applied for its priority review in May, and once the priority review was granted in July, the FDA was able to reach a decision on the drug in less than six months. But without it, the wait could have been up to 10 months.

Moderna applied for priority review in June, which has yet to be granted.

Pfizer’s full FDA approval comes as the U.S. is seeing another surge in cases and hospitalizations as the highly contagious delta variant continues to spread and vaccination rates stall.

But as the worrisome delta variant has resulted in overwhelmed hospitals, vaccine administration rates have also increased in recent days — with a million a day given Thursday, Friday and Saturday. Just over half of the total U.S. population is fully vaccinated against the virus, data from the Centers for Disease Control and Prevention shows.

The FDA’s action also may spur more vaccine mandates by companies, universities and local governments. This month New York City, New Orleans and San Francisco all imposed proof-of-vaccination requirements at restaurants, bars and other indoor venues. At the federal level, Biden is requiring government workers to sign forms attesting that they’ve been vaccinated or else submit to regular testing and other requirements.

"Today I'm calling on more companies in the private sector to step up vaccine requirements that will reach millions of more people," the president said. "If you're a business leader, a nonprofit leader, a state or local leader, who has been waiting for full FDA approval to require vaccinations, I call on you now to do that requiring."

The FDA already is allowing the emergency use of a third dose of either the Pfizer or Moderna vaccine for people with severely weakened immune systems, such as organ transplant recipients and cancer patients who don’t respond as strongly to the usual two shots. For everyone else who got those vaccinations, the Biden administration is planning ahead for booster shots eight months after the second dose — if the FDA and CDC agree.

Also still to be decided is vaccination of children under 12. Both Pfizer and Moderna are studying youngsters, with data expected in the fall.