D.C. announced today it will hire hundreds of people to work as contact tracers. FOX 5’s Lindsay Watts finds out what that work entails and what to expect if you get a call in the video above.

FOX NEW - The U.S. Department of Defense (DOD) announced Wednesday that a medical company based in Maine is receiving $75.5 million under the Defense Production Act (DPA) to ramp up the production of swabs for coronavirus testing, a move that comes after the administration announced it would use the DPA to keep meat processing facilities open as they face challenges with keeping workers safe from the coronavirus.

DOD Spokesman Lt. Col. Mike Andrews said the aim of the move, which awards a contract to Puritan Medical Products to make the swabs, is to "increase swab production by 20 million per month starting in May.

"Puritan Medical Products was awarded the contract, which will quickly establish a new manufacturing facility capable of doubling its current monthly output of 20 million to 40 million swabs," Andrews said.

Trump, in his April 19 coronavirus task force briefing, announced that he would use the DPA to mandate the production of 20 million swabs per month as part of a larger effort to increase testing capacity but did not name any company specifically.

At that same briefing, Trump indicated that public and private labs have the capacity to significantly increase testing for COVID-19, the disease caused by the coronavirus, which is one of the main criteria governors have cited as a prerequisite to lifting their stay-at-home orders and other social distancing measures once hospital admissions and deaths from the coronavirus begin to decline. The issue, Trump said, was ensuring there are enough swabs to administer tests in the first place. 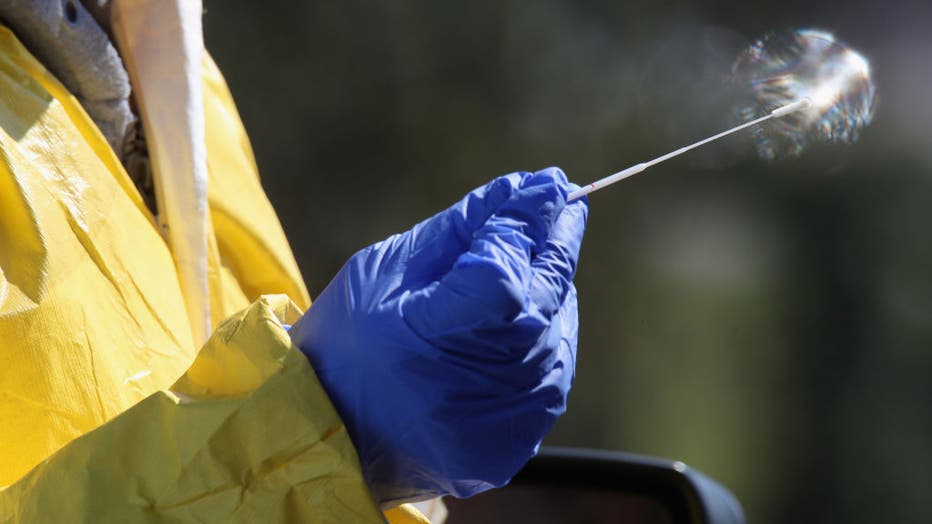 A close-up view of a swab used by medical workers to administer the coronavirus test at the drive-in center at ProHealth Care on March 21, 2020 in Jericho, New York. (Photo by Bruce Bennett/Getty Images)

"We're going to get it done to a level in a very short period of time," Trump said, referring to efforts to increase testing capacity in states, "because all of these, all the swabs are coming in, all of the necessary materials."

Trump has received criticism for responding too slowly to the coronavirus crisis, including on his reluctance to use the DPA for medical equipment. A Washington Post editorial as recently as Wednesday criticized Trump for using the DPA on meat processing facilities but not for medical equipment.

"President Trump has been careful — some would say timid — in his use of the Defense Production Act as the country battles the spread of the novel coronavirus," the paper's editorial board wrote. "He hesitated to invoke it when there was a clamor to increase the supply of badly needed face masks and other personal protective equipment. He used it to increase the stocks of swabs, but not for the reagent chemicals that are required for widespread diagnostic testing."

The Post continued: "Yet when it came to beef burgers and chicken nuggets, Mr. Trump made his priorities clear."

Andrews said that Puritan Medical Products would be manufacturing the swabs in Pittsfield, Maine, and hiring 150 workers who would start in May.

"The increased production and long-term industrial capacity will help support the needs of the nation," Andrews said.