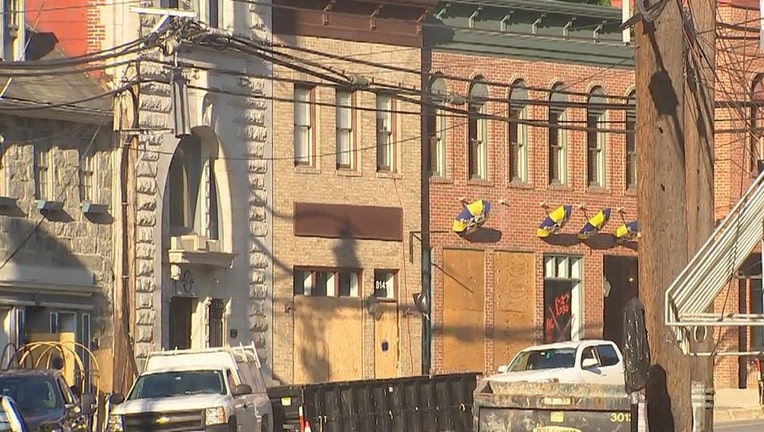 ELLICOTT CITY, Md. (AP) - Moving to safeguard the public after raging floodwaters engulfed a Maryland town's main street twice in two years, authorities have announced a plan to demolish roughly 5 percent of the buildings in the flood-prone historic district.

Howard County Executive Allan Kittleman delivered the broad outlines of a roughly $50 million five-year flood mitigation plan Thursday at a news conference in Ellicott City's historic center. It calls for tearing down 10 ravaged properties on the hard-hit lower half of the former mill town's once-picturesque main street. That move will expand the flood plain for the next time waterways burst their banks -- a sure thing as more intense rainstorms bear down due to climate change impacts.

"I wish we weren't here. But this is a change we need," said Kittleman, adding that some residential properties further up the hill will also need to be bulldozed to increase the size of culverts flowing into the district, about 13 miles (20 kilometers) west of Baltimore.

County Councilman Jon Weinstein said reshaping swaths of Old Ellicott City won't be easy but safeguarding lives in the coming months has to be the top priority. The lower part of main street where buildings will be torn down will be replaced with green space and a wider, deeper channel for tributaries flowing downhill.

"We don't want to lose another life because of catastrophic flooding here in town. We don't want Ellicott City's residents or businesses or visitors to be put at risk or fear every rain storm," he said.

Old Ellicott City became a soggy ghost town in May after floodwaters violently gutted shops and swept a visitor to his death. The treacherous flash flood occurred less than two years after a 2016 flood -- at the time dubbed a 1-in-1000 year event -- ravaged the old town situated in a ravine, destroying businesses and killing two people.

Ellicott City's main street has recently reopened to vehicles and foot traffic but numerous properties are boarded up and the strenuous task of picking up the pieces goes on. Businesses that did not sustain devastating damage have reopened their doors and are doing the best they can with what remains of the all-important summer season.

Lexi Milani, who owned a restaurant that was so ravaged after the 2016 flash flood that it never reopened, said she was "unbelievably sad" about the plans for razing properties on the hardest hit stretch of main street. But it's the sensible move after two deadly floods in less than two years, she said.

"I accept that changes must be made and the town must be envisioned anew after this second catastrophic event," Milani said Thursday.

At least one business owner whose property is marked for demolition is not entirely convinced that tearing down buildings is necessary. Sally Fox Tennant, whose gutted crafts shop had its floors and inventory swept away in May, said authorities need to provide more support.

"We need financial help and the business owners here need to be given real consideration. If you are asking somebody to totally abandon their place of business, you've basically destroyed their livelihood. Believe me, we've lost enough already," said Tennant, standing outside her gutted property.

Tennant -- who lived above her shop -- said negotiations with officials is just getting underway. She said, "their numbers have to be there for this to work."

Kittleman said conversations with property owners about purchasing their buildings are ongoing. He voiced confidence that future generations would look back at the flood mitigation work undertaken by his administration as the difference maker for Ellicott City.

"We believe with county, state and whatever funding we can get from the federal government we can make it work," he said.