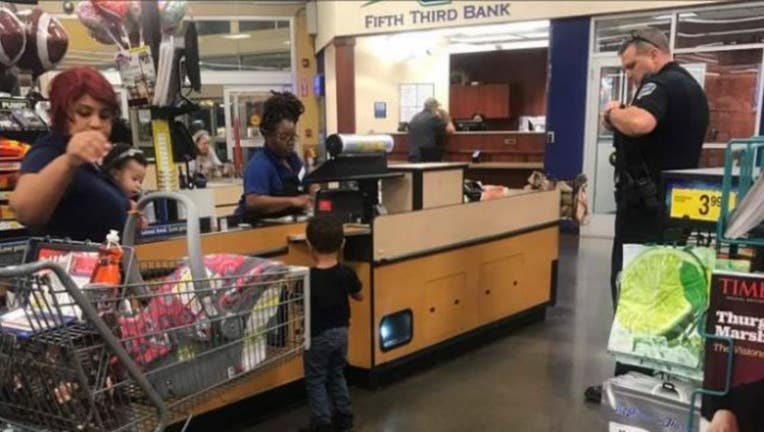 KENNESAW, Ga. - A Kennesaw police officer is being praised on social media for going above and beyond the call of duty to help out a local mom.

Madison Obrien shared a touching post on Facebook last week after an unforgettable shopping experience at a Kroger in Kennesaw. She said it all began in the parking lot when she and her roommate walked passed a mother who was getting a screaming toddler out of her vehicle as well as a crying baby.

"She definitely had her hands full," Obrien said. "As we smiled at her and continued walking, we saw a cop get out of his patrol car and walk up to the mom."

Obrien said the officer offered the mom some help and grabbed the toddler's hand. He then grabbed a buggy for the mother, wished her well, and they went their separate ways.

Thirty minutes later, Obrien said she was walking toward the checkout line when they passed the mother again. She had the baby on her hip and her toddler son by her side.

"We watched as the toddler picked up a small toy and asked his mom if he could have it," Obrien said. "The mom replied, trying to smile but with sadness in her face, 'I'm sorry baby, we can't get that today.'"

Obrien said her heart broke into a million pieces as the boy began to cry, and she was about to buy the toy herself when the officer from earlier offered to do the same.

"The cop then proceeded not only to buy the toy, but also this mom's entire grocery cart of food as well," Obrien said. "We watched in amazement at this superhero cop and his giving heart!"

Obrien said the act of kindness served as a reminder that there are still so many good people in the world. She snapped a photo of the officer and the mother in the checkout line and shared it on Facebook.

"He was just a good person trying to do something good," she said. "I hope this encourages you as much as is has encouraged me to, when you can, lend a helping hand, bless somebody else's day, or just be kind. God put us all here for the same purpose, to be a light in the darkness!"

Kroger cashier Courtney Morris replied to Obrien's Facebook post and said she was working the register at the time the photo was taken.

"I immediately felt bad because in my eyes I saw a white cop and a black mother, and I couldn't help but think something bad was about to happen to her," Mo said. "Not only did the cop pay for her groceries but he also got cash back and gave her that as well! It was definitely heartwarming, and it shows that in a world full of mess there are good people out here and that God is doing miracles every day!"

Morris told FOX 5's Katie Muse she felt good after witnessing the kind act and it's nice to know there are people in the world willing to help others.

"I don't know the woman's financial situation but as a mother of two, I'm sure that moment really impacted her day," Morris said.