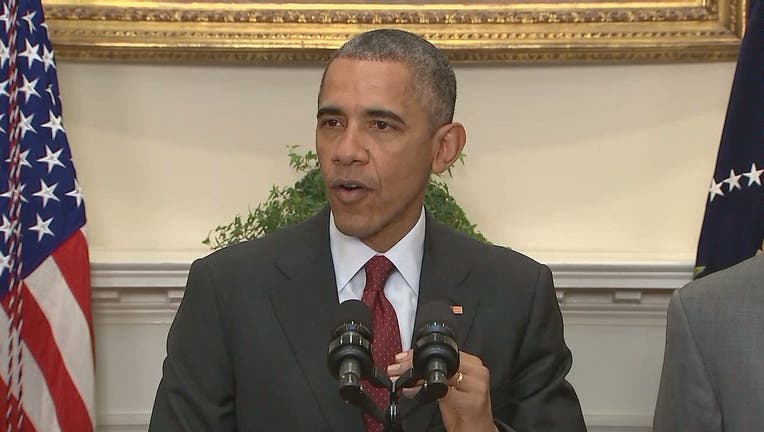 WASHINGTON (AP) -- President Barack Obama commuted the prison sentences of 61 drug offenders on Wednesday including more than a third serving life sentences, working to give new energy to calls for overhauling the U.S. criminal justice system.

All of the inmates are serving time for drug possession, intent to sell or related crimes. Most are nonviolent offenders, although a few were also charged with firearms violations. Obama's commutation shortens their sentences, with most of the inmates set to be released on July 28.

Obama, in a letter to the inmates receiving commutations, said the presidential power to grand commutations and pardons "embodies the basic belief in our democracy that people deserve a second chance."

One of the inmates, Jesse Webster of Chicago, is serving a life term for intent to sell cocaine and filing false tax returns. Another, Byron McDade of Bowie, Maryland, got 27 years for cocaine-related charges as well. In both cases, judges in the cases later said publicly it was too harsh, though sentencing guidelines often prevent judges from being more lenient. Webster and McDade will both be released later this year.

Most are nonviolent offenders, although a few also faced firearms charges. Nabar Criam of Brooklyn, New York, was sentenced to 15 years for possession of crack cocaine with intent to distribute, but received an additional charge for having a gun on hand during a drug trafficking crime.

The latest tranche of commutations brings to 248 the total number of inmates whose sentences Obama has commuted -- more than the past six presidents combined, the White House said. The pace of commutations and the rarer use of pardons are expected to increase as the end of Obama's presidency nears.

"Throughout the remainder of his time in office, the president is committed to continuing to issue more grants of clemency as well as to strengthening rehabilitation programs," said Neil Eggleston, the White House counsel, in a blog post.

He added that clemency is a tool of last resort that can help specific people, but doesn't address the broader need for a "more fair and just" system and "fix decades of overly punitive sentencing policies."

In a bid to call further attention to the issue, Obama met for lunch Wednesday with people whose sentences were previously commuted to hear about the challenges of re-entering society. One of the former inmates, Kemba Smith, was seven months pregnant when she turned herself in on crack cocaine charges, and she served more than 6 years before former President Bill Clinton granted clemency in 2000. She went on to study social work and become an advocate, the White House said.

"Their stories are extraordinary," Obama said after dining at a Washington eatery. "We're all imperfect. We all make mistakes."

Though there's wide bipartisan support for a criminal justice overhaul, what had looked like a promising legislative opportunity in Obama's final year has recently lost steam. As with Obama's other priorities, the din of the chaotic presidential campaign has increasingly made cooperation among Republicans and Democrats in Congress this year a non-starter.

Last month, a group of Senate Republicans declared their opposition to the legislation Obama and some conservatives had been pushing, dealing a major blow to prospects of getting it done this year. A key Senate committee had already approved the bipartisan bill, which would let judges hand out lesser sentences more lenient than the federal mandatory minimums and eliminate mandatory life sentences for drug offenders caught three times. House Majority Leader Kevin McCarthy, R-Calif., has said the overhaul is doable but doesn't have to get done in 2016.

Obama has long called for getting rid of strict sentences for drug offenses, arguing they lead to excessive punishment and sky-high incarceration rates. With Obama's support, the Justice Department in recent years has directed prosecutors to rein in the use of harsh mandatory minimums.

The Obama administration has also expanded criteria for inmates applying for clemency, targeting nonviolent offenders who have behaved well in prison and would have received shorter sentences if convicted of the same crime a few years later. Civil liberties groups hailed that move but have since raised concerns that too few are actually receiving clemency under the policy.