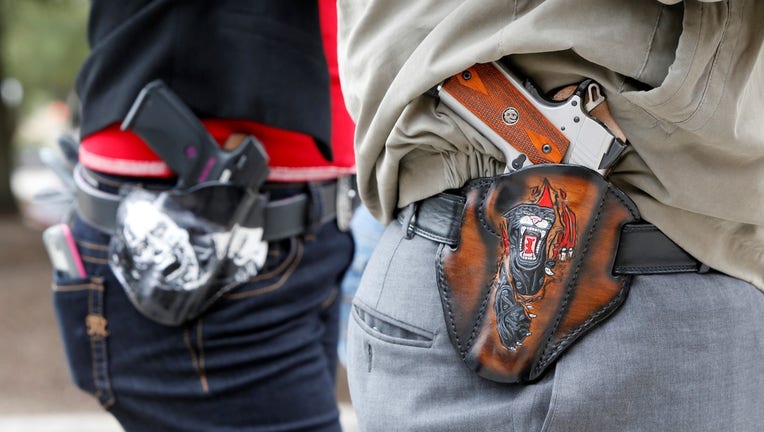 AUSTIN, TX - JANUARY 1: Art and Diana Ramirez of Austin with their pistols in custom-made holsters during and open carry rally at the Texas State Capitol on January 1, 2016 in Austin, Texas. On January 1, 2016, the open carry law takes effect in Texa (Photo by Erich Schlegel/Getty Images)

HOUSTON (FOX 26) - In a few weeks, Texas will relax its restrictions on multiple firearm laws, allowing Texans to have guns and ammunition in public areas.

The new changes were passed in the most recent legislative session, which came more than a year after the Santa Fe High School shooting.

Texas has had multiple of the deadliest mass shootings in U.S. history, including the University of Texas in Austin killing spree that introduced the nation to the concept of mass shootings, and the most recent massacre in El Paso that left 22 people dead and dozens injured.

Here are the gun laws going into effect on September 1:

House Bill 1143 prevents school districts from regulating the manner in which a licensed person's handgun, firearm, or ammunition is stored in their vehicle in a school parking area, as long as they are not in plain view.

In the wake of the Santa Fe shooting, Gov. Gregg Abbott signed House Bill 1387, abolishing the cap on how many school marshals can carry guns at public or private schools.

Firearms in places of worship

Senate Bill 535 removes "a church, synagogue, or other established place of religious worship" from the list of prohibited locations for carrying a firearm, allowing licensed gun owners to carry handguns in places of worship. This new law comes almost two years after a gunman killed 26 people at a Sutherland Springs, Texas church.

Under House Bill 2363, certain foster homes will be allowed to store firearms and ammunition, as long as they are stored together in the same locked location for personal protection.

House Bill 1791 closes loopholes in the state's "wrongful exclusion" law that cities, counties and state agencies have been using to restrict License To Carry holders in government buildings.

House Bill 1177 will allow gun owners to carry guns, openly or concealed, for up to a week while evacuating from a declared state or local disaster area, or while returning to that area. It also gives disaster shelters the option to accommodate evacuees with firearms.

If a License To Carry holder enters an establishment that has signs prohibiting guns, and they leave immediately when asked, House Bill 121 protects them from prosecution for the offense of trespass.

Landlords won't be able to prevent tenants or their guests from carrying a firearm, under House Bill 302. Residents or guests can't be restricted by lease agreements from carrying, storing, or possessing a firearm or firearm ammunition on certain residential or commercial property.

Senate Bill 741 forbids property owners associations from prohibiting or restricting the possession, transportation, or storage of a firearm or ammunition. The law also prohibits restrictions on the lawful discharge of a firearm.