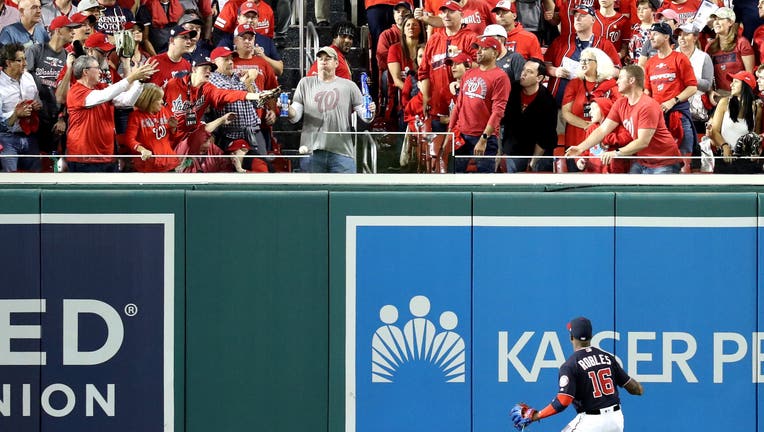 WASHINGTON, DC - OCTOBER 27: Victor Robles #16 of the Washington Nationals watches a two-run home run hit by Yordan Alvarez (not pictured) of the Houston Astros leave the park during the second inning in Game Five of the 2019 World Series at National

HOUSTON (FOX 5 DC) - A Washington Nationals fan who made history Sunday night during Game 5 of the World Series when he was caught on camera double-fisting two Bud Light beers after a home run ball hit him square in the chest was honored with his very own commercial Tuesday night.

After Adams' nationally-televised display of utter courageousness, Bud Light immediately began searching for their "hero." And on Monday, they found him.

In a tweet, the company showed off their specially-made t-shirt of Adams' double-fisting his Bud Light's during Sunday night's championship series game against the Houston Astros with the caption: "Always Save The Beers."

And on Tuesday, the company featured Adams in his very own commercial, which aired during Game 6 in Houston, using the caption: "Pain is temporary, glory is forever." Watch below: