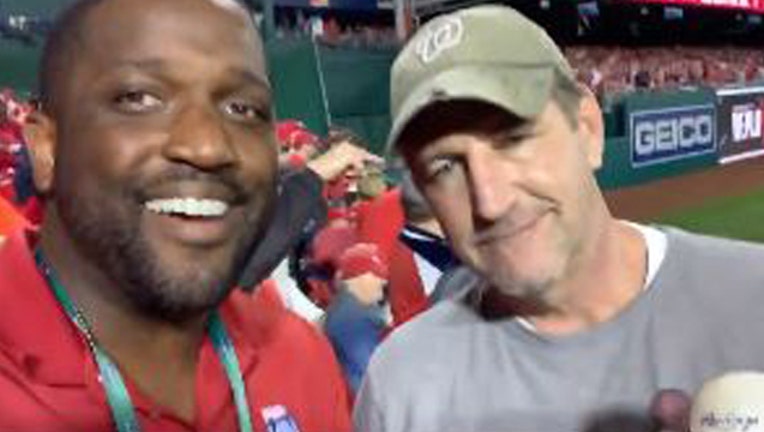 Jeff Adams says he didn't feel a thing after getting hit in the chest by a home run during Game 5 of the World Series on Sunday at Nationals Park.

WASHINGTON - Some men might be hurt by a home run ball that flies square into their chest during a tense World Series game.

Nationals fans were caught searching for highlights Sunday night after losing Game 5 of the World Series to Houston. And they found one in a fan who caught a ball on his chest.

"It was from the other team, so I didn't feel anything," Adams told Fox 5's Ike Ejiochi after his courageous nationally televised display Sunday night during Game 5 of the Fall Classic. "We're gonna hit more home runs, right? Go Nats."

Adams took an early bomb from the Astros' Yordan Alvarez in left field Sunday because he was drinking two beers at the same time. Many were impressed that Adams didn't spill a single drop.

Adams is a Nats fan, but that doesn't mean he's giving the home run ball back.

"World Series, we're not going to do that," Adams quipped.

He almost got another home-run ball in the 8th inning, when Nats' left-fielder Juan Soto blasted another shot into left field:

Like the ghost of Babe Ruth told Benny Rodriguez in "The Sandlot" ... heroes get remembered, but legends never die.