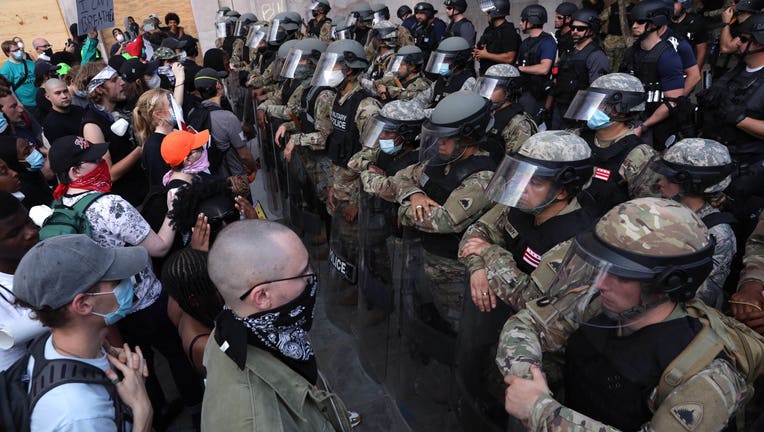 Demonstrators stand in front of National Guard and other law law enforcement officers during a peaceful protest against police brutality and the death of George Floyd, on June 3, 2020 in Washington, D.C. (Photo by Alex Wong/Getty Images)

WASHINGTON - President Trump says the National Guard will begin withdrawing from D.C. after he ordered troops to monitor police brutality protests in the nation's capital.

The president announced the news Sunday morning on Twitter, adding the troops "can quickly return, if needed."

President Trump called in the National Guard after the outrage over the death of George Floyd and other unarmed black men killed by police devolved into rioting and looting in the District.

Tensions reached their peak Monday, when troops tear-gassed protesters and beat them with batons to clear the way for a presidential photo opportunity at St. John's Church, which was set on fire the night before.

The president attempted to frame himself as a "Law & Order" president, but the stunt quickly drew condemnation from many, even former Defense Secretary Jim Mattis, as a bastardization of the protesters' 1st Amendment rights.

Local leaders and District residents were also alarmed at the number of unidentified military personnel occupying the nation's capital.

DC Mayor Muriel Bowser on Thursday requested that the president withdraw all "extraordinary" military personnel from the District.

The request could have set up a mostly unprecedented constitutional conflict centered on the 3rd Amendment, which asserts that the military can't forcefully occupy personal property.