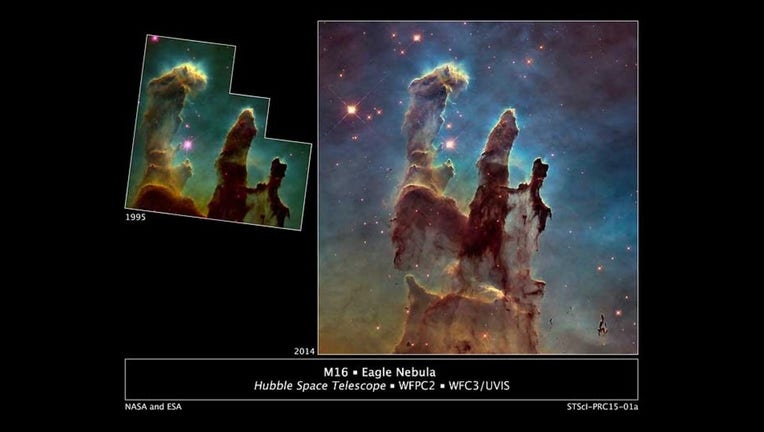 In 1995, NASA's Hubble Space Telescope released an iconic image that changed people's perception of space. Through the photo of the so-called "Pillars of Creation," the telescope offered a glimpse at what the origins of our own solar system's sun might have looked like.

Showing three columns of gas highlighted by the ultraviolet light emitted from a nearby star cluster in M16, a region of the Eagle Nebula in the constellation Serpens, the image has inspired everyone from those behind the recent "Star Trek" films to children who aspire to study astronomy.

In honor of the telescope's upcoming 25th anniversary in April, NASA has provided a clearer view of the celestial phenomenon, with new high-definition images of the "pillars" that are being unveiled at this week's American Astronomical Society meeting.

What is it that gives the image such power? For Ray Villard, news director at the Space Telescope Science Institute, the photograph gave people a look at the universe as something that was "organic" and not a "dark void."

"It looks almost like a fantasy landscape – there's a feel to it that convinces yourself that you are looking at something that is living under a microscope," Villard told FoxNews.com. "It defies expectations of what's out there in space."

Villard, who first became interested in astronomy when he caught a glimpse of an image of a similar celestial site – the "Horsehead Nebula" – as a young child, said that these kinds of images, made possible by the wide reach of Hubble, are "inspirational" and "resonate way beyond hardcore science." In short, these glimpses at the far reaches of space are accessible in that they make astronomy tangible for the science lay person.

The image of the pillars sheds light on the constantly shifting face of the universe. The gaseous bodies suggest "creation" but also "destruction," according to a release from NASA.

"I'm impressed by how transitory these structures are," Arizona State University in Tempe researcher Paul Scowen said in the release. Scowen led the original observation of the nebula with astronomer Jeff Hester.

"They are actively being ablated away before our very eyes. The ghostly bluish haze around the dense edges of the pillars is material getting heated up and evaporating away into space. We have caught these pillars at a very unique and short-lived moment in their evolution," Scowen said.

The swirling gaseous bodies shown in the images are what scientists say our own sun's formation looked like. Villard said that access to these kinds of images sheds light on our own origins.

"We don't have time machines, but we do have these images that allows us to look at other areas of other galaxies," Villard said. "Hubble's images serve as a very powerful time machine that can almost allow you to look at the beginning of time."

Villard added that the pillars' appeal is timeless – they will continue to fascinate scientists and the most casual of stargazers alike 50 years and 500 years from now.

"They'll be talking about Hubble 500 years from now," Villard said. "Hubble is like our modern-day Copernicus. With the new higher-definition images, a whole new generation of people can intimately share the wonders of Hubble's discoveries. It's the people's telescope."