FOX 5's Sierra Fox got an inside look at a training program hosted by the Fairfax County Police Department that is helping narcotic sniffing dogs transition to searching for guns.

FAIRFAX COUNTY, Va. - Several Virginia counties are giving their narcotic sniffing dogs a new job, now that they can no longer be used for seeking out marijuana.

When marijuana became legal in the Commonwealth in 2021, it led to police departments no longer being able to use their narcotic-sniffing dogs for that purpose. So now, some of those dogs are being given a new job that will help keep communities safe.

This week, the Fairfax County Police Department and several other Northern Virginia law enforcement agencies kicked off a program meant to train narcotic-sniffing dogs to instead detect weapons and shell casings.

FOX 5 was the only news crew who that got an inside look at the training program, which is happening at the Fairfax County Police Department's Operations Support Bureau.

Officials with the police department tell FOX 5 the main goal of the program is to curb the rise in gun violence and get guns off the streets.

"We know that for a fact that we have found more and more of these ghost guns and these are guns that are sold – palm or kits that are partially finished and they’re easy to continue to make into a fully functioning firearm and because someone can essentially bypass any sort of background check to get a firearm legally, these guns have popped up pretty regularly that we’ve been pulling them off the street," said Ari Morin, a Second Lieutenant with the Fairfax County Police Department.

Morin explained that the dogs could help police investigate shootings days or weeks after they happen.

"If a gun was dropped in the woods after a food pursuit or vehicle pursuit, if we’re not directed in right location after a certain amount of time, a dog will walk right past it and not know it’s there. By training them on the odor that’s created when a weapon is fired, the dogs can still find that gun days or maybe even weeks after it’s discarding," Morin tells FOX 5.

The dogs will not be used during traffic stops because carrying a firearm is legal in Virginia.

The training involves officers exposing the dogs to different smells, in hopes that they can transition to recognizing the odor created when a gun is fired. The K-9s are also being taught to alert their handler when they sniff out the scent. This odor imprinting training is four weeks long, and involves the dogs putting in 160 hours of work.

If the trainees detect the right smell they will be rewarded with a treat that is widely loved by dogs of all kinds, a tennis ball! 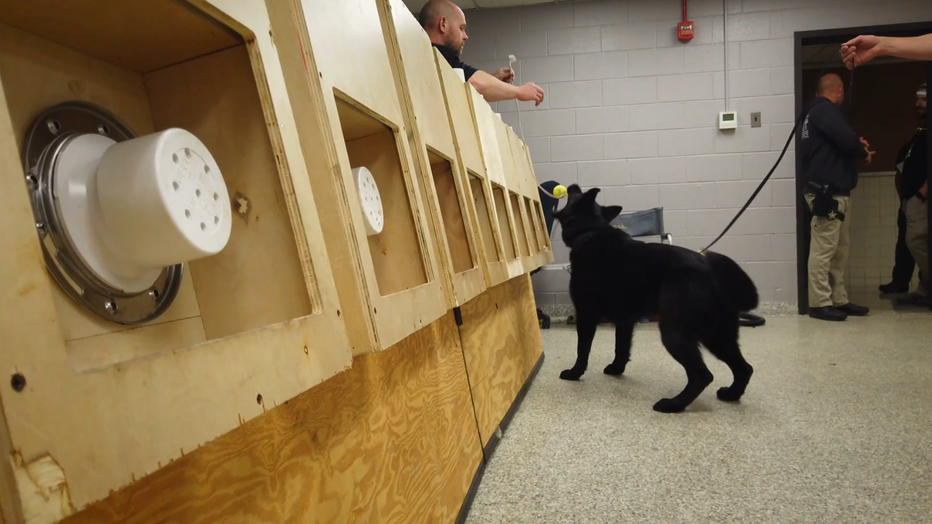