WASHINGTON (FOX 5 DC) - A Metropolitan Police Department officer is publicly reaching out to elected officials informing them of his experience during the Capitol Riot back in January and urging them to "fully recognize" the actions of the officers involved.

In his letter addressed to "all elected members of the United States Government," Michael Fanone says he has been an officer with MPD for two decades and says he was severely injured after his efforts at the U.S. Capitol on Jan. 6. 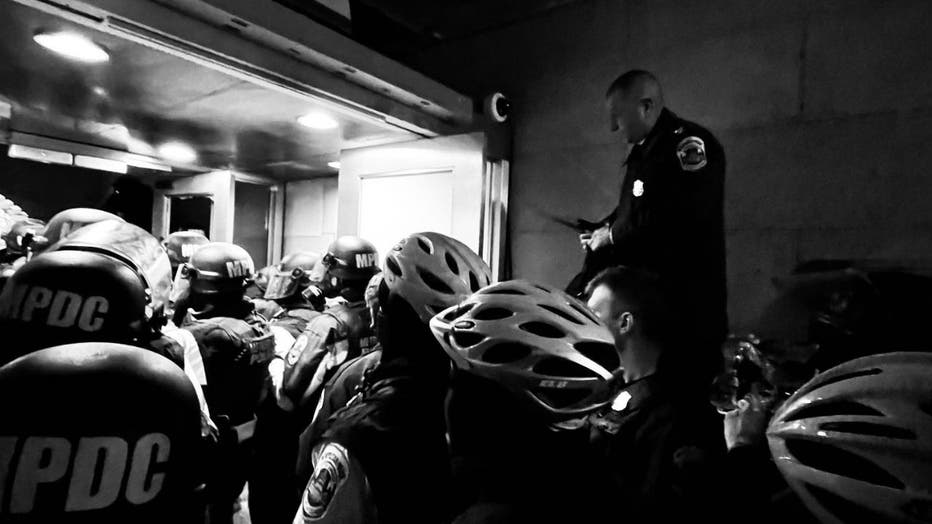 "I was pulled out into the crowd, away from my fellow officers, beaten with fists, metal objects, stripped of my issued badge, radio and ammunition magazine and electrocuted numerous times with a Taser," Fanone's letter reads.

Fanone says he was at the West Terrace Lower Tunnel on the Capitol grounds when he observed fighting that was "nothing short of brutal."

"I observed approximately thirty police officers standing shoulder-to-shoulder maybe four or five abreast using the weight of their own bodies to hold back the onslaught of violent attackers," the letter reads. "Many of these officers were injured, bleeding and fatigued but they continued to fight."

Fanone says he was inspired during the riot by Commander Ramey Kyle who remained "cool, calm and collected." He also says he tried to help fellow officers who appeared injured, but they only identified others who may be in more need of assistance.

"I have never experienced such bravery, courage and selflessness," Fanone says in his letter.

Fanone says since Jan. 6, he has struggled physically and mentally from the effects the day had on him.

"I struggle daily with the emotional anxiety of having survived such a traumatic event but I also struggle with the anxiety of hearing those who continue to downplay the events of that day and those who would ignore them altogether with their lack of acknowledgment," his letter says. "The indifference shown to my colleagues and I is disgraceful."

Fanone says it has been 119 days since the attack on the Capitol and he wants action taken to recognize the officers involved and their efforts.

"The time to fully recognize these Officers actions is NOW!" the letter concludes.

Fanone tells FOX 5 his frustrations are not just with Trump or leaders in the GOP who downplay what happened, but also Democrats he’s spoken to and the DC mayor & council.

He says he feels there is a lack of acknowledgment and everyone has just moved on while he continues to struggle.

The FBI continues to search for suspects involved in the Capitol Riot. In the two months since the attack, the FBI says it has received hundreds of thousands of tips and has arrested more than 300 individuals. More than 65 of those arrested were arrested for assaulting law enforcement officers.