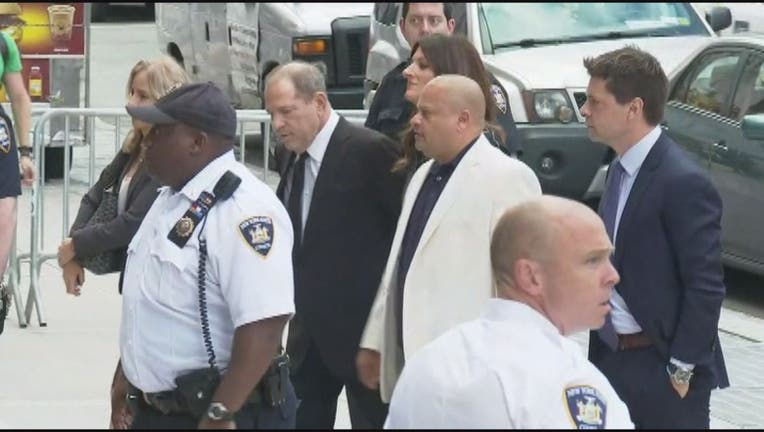 NEW YORK - (AP) -- Movie mogul Harvey Weinstein pleaded not guilty to a new indictment Monday that includes revised charges of predatory sexual assault, a development that caused the judge to delay the start of his trial until early next year.

The tweak to the case was intended to open the door for an actress to testify against Weinstein in a rape and sexual assault trial that had been scheduled to start on Sept. 9.

Weinstein was in and out of a Manhattan courthouse quickly to enter the plea. He didn't speak with reporters.

After the hearing, his lawyers said they would ask the judge to dismiss the indictment, which they called a "desperate" attempt to salvage the case.

"I think the case itself is weak," said his lawyer Donna Rotunno.

Weinstein previously pleaded not guilty to charges accusing him of raping a woman in 2013 and performing a forcible sex act on a different woman in 2006.

Prosecutors said the new indictment was needed to bring evidence involving Annabella Sciorra, best known for her work on "The Sopranos." She says Weinstein raped her inside her Manhattan apartment after she starred in a film for his movie studio in 1993.

Sciorra isn't being added as a victim in the case, because the alleged attack took place too long ago to be prosecuted under state law, but prosecutors want to use her testimony to prove that Weinstein had a pattern of assaulting woman. That's necessary to prove the charge of predatory sexual assault.

Sciorra's lawyer, Gloria Allred, said she was willing to tell her story to bring Weinstein to justice. She criticized the defense team for saying they would try to get her testimony barred.

"Why are they so afraid of having additional witnesses testify?" she said.

Weinstein, 67, who's free on $1 million bail, has denied all accusations of non-consensual sex.

Prosecutors can't charge Weinstein with the alleged attack on Sciorra because the accusation dates to 13 years before New York eliminated its statute of limitations for rape cases in 2006. But in court papers filed this month, they told the judge the indictment will give them a legal foundation to call the actress as a witness to strengthen the predatory sexual assault charge against Weinstein.

The Associated Press generally does not name people who say they are victims of sexual assault, but Sciorra went public with her story in a story in The New Yorker in October 2017.

Court papers filed by the defense called the attempt to make Sciorra a prosecution witness an "11th-hour maneuver" that "raises significant legal issues" and predicted it could delay the trial.

Separately, defense attorneys are asking appeals court to move the trial case out of New York City because a "circus-like atmosphere" there fueled by news reports and social media posts. A decision on the request could come as early as Monday.