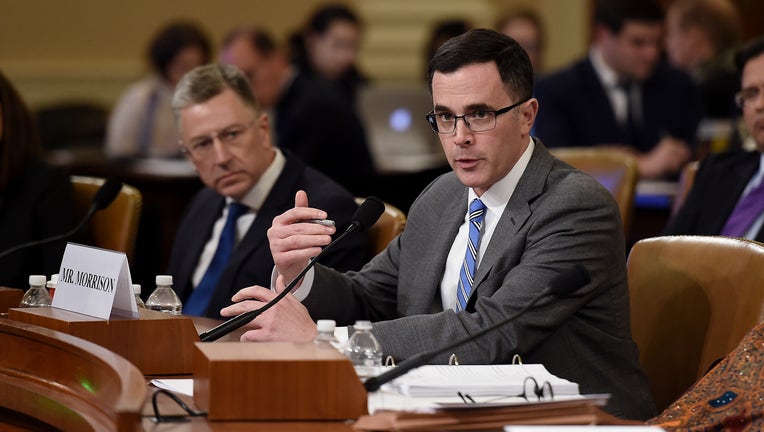 WASHINGTON (FOX NEWS) - Republicans sounded a celebratory note as House Democrats' impeachment inquiry wrapped up another day of public hearings Tuesday evening, saying the day's witnesses had served only to highlight fundamental problems in the case against President Trump.

“Did anyone ever ask you to bribe or extort anyone at any time during your time in the White House?" House Intelligence Committee Ranking Member Devin Nunes, R-Calif., asked at one point in Tuesday's afternoon hearing.

Later, Rep. Elise Stefanik, R-N.Y., hit the same notes in asking the witnesses about Trump's fateful July 25 call with Ukrainian President Volodymyr Zelensky: "Mr. Morrison, you were on that call, and there was no quid pro quo, correct? No bribery? No extortion?"

"Correct," Morrison replied in response to each question.

"No, there was not," Volker replied, again and again.

The answers underscored a problem facing House Democrats as their impeachment inquiry continued into its second week of public hearings: As more witnesses have testified, more soundbites have emerged that may help Republicans and the Trump campaign argue that the proceedings were politically motivated theater, long in the works and foreshadowed openly by Democrats for months, if not years.

Morrison, in another key moment, testified Tuesday afternoon that he understood the transcript of Trump's call with Ukraine's leader wound up on a highly secured and classified computer system due to an "administrative error" -- not, as Democrats have alleged, because the president wanted to hide his conversation.

And, Volker testified repeatedly that he never received any indications at all that there was an improper quid pro quo with Ukraine, in which the Trump administration allegedly sought a probe of former Vice President Joe Biden and his son Hunter in exchange for military aid.

Ohio GOP Rep. Jim Jordan told Fox News, "This was a very good day for Republicans, for our president."

"Kind of hard to prove a corrupt quid pro quo theory when the key U.S. policy people, plus the Ukrainians, were never aware of such an arrangement," Texas GOP Rep. Dan Crenshaw added late Tuesday, noting that Ukraine's president has said he felt no pressure from Trump to open any probes. "Can we go back to governing now, that’d be great thanks."

Morrison and Volker's testimony was sought by the GOP, and the two undercut Democrats' poll-tested claims of White House "bribery" and a cover-up. But, they also raised new questions concerning the administration's use of the little-discussed codeword-level system that ordinarily held sensitive national-security information. Back in September, a senior Trump administration official acknowledged that White House lawyers directed moving the transcript of the call to the secure system, noting that several of Trump's previous phone calls with foreign leaders had leaked to the media.

Morrison previously testified behind closed doors that senior NSC lawyer John Eisenberg had relayed to him that his secretary accidentally put the transcript in the classified system. Morrison said Eisenberg wanted to "restrict access" to the transcript, but maintained that the secretary had apparently misinterpreted that instruction.

"It was represented to me that it was a mistake," Morrison testified Tuesday, saying he tried to "pull up the package in our system" but was prevented from doing so. When he asked why the transcript was unavailable, he testified that he was "informed it had been moved to the higher classification system" at Eisenberg's direction. Then, Eisenberg told Morrison that he "gave no such direction" and that it was an "administrative error," according to Morrison.

Morrison said to the best of his knowledge, there was no "malicious intent" in the decision to move the transcript to the compartmentalized system, and all essential personnel retained access to the transcript even after it was moved.

Later in the day, Volker made clear he had not seen anything to support Democrats' contention that Trump improperly withheld foreign aid to Ukraine as a means of forcing an investigation into the Bidens' dealings in the country.

Instead, Volker suggested -- in a moment that the Trump campaign hyped on social media -- that Trump's general hesitation to provide foreign aid, especially to corrupt countries, was the prevailing justification for holding up aid to Ukraine temporarily.

Asked whether he saw any evidence that Trump had committed "bribery" -- the term Democrats have taken to using, after focus groups indicated that it would help them sell impeachment to voters -- Volker was unequivocal that he had not. In fact, Volker said, Trump never linked any probe of Burisma or the Bidens to any military aid. Hunter Biden sat on Burisma's board while his father spearheaded Ukraine policy as vice president.

"I have only seen an allegation of bribery in the last week," Volker said. "I was never involved in anything that I considered to be bribery at all, or extortion."

In one remarkable moment, Volker contradicted a media headline; asked about a Daily Mail story claiming he had "walked back" his testimony and had "now learned" there was a link between U.S. aid and Biden probe, Volker refuted the website outright.

Volker also said he didn't initially realize the connection between a Trump-sought investigation of Burisma and the Bidens, given that Burisma was seen as a symbol of Ukraine's endemic corruption problem.

Hunter Biden was a board member of the Ukrainian natural gas company Burisma Holdings, which had been under investigation before then-Vice President Joe Biden pressured Ukraine to fire the prosecutor in charge. In his call with Zelensky, Trump suggested the Ukrainians look into the circumstances of the prosecutor's termination, including Joe Biden's boast that he had the prosecutor fired by threatening to withhold $1 billion in critical aid. "Biden went around bragging that he stopped the prosecution, so if you can look into it…It sounds horrible to me," Trump said.

In a lengthy opening statement, Volker said he didn't have any problem with pushing Ukraine to open an investigation into Burisma or corruption.

"It has long been U.S. policy under multiple administrations to urge Ukraine to investigate and fight internal corruption," Volker said.

Deputy Assistant Secretary of State George Kent similarly testified behind closed doors last month that he had qualms about Hunter Biden's lucrative role on the board of Burisma.

Both Morrison and Volker were involved in the Trump administration's Ukraine policy at the time of Trump’s momentous summer phone call with Zelensky.

The testimony followed five hours of testimony earlier in the day with the NSC's Lt. Col. Alexander Vindman and Vice President Pence aide Jennifer Williams, who were each critical of Trump's conversation with Zelensky.

Volker, who resigned in September after becoming embroiled in the scandal, added that he didn't "understand" at the time that an investigation of Burisma "was tantamount to investigating Vice President Biden."

"I saw them as very different – the former being appropriate and unremarkable, the latter being unacceptable," Volker said. "In retrospect, I should have seen that connection differently, and had I done so, I would have raised my own objections."

Until Tuesday, none of the witnesses who have testified at the public hearings had first-hand knowledge of the president's thinking, which Republicans have used to cast doubt on Democrats' allegations, but Vindman, Williams, and Morrison all listened in on Trump's July 25 phone call with Zelensky.

"I feared at the time of the call on July 25th how its disclosure would play in Washington's political climate," Morrison said in his opening statement. "My fears have been realized."

Morrison said his understanding was that Trump generally was skeptical of foreign aid, and wanted to make sure that taxpayers were "getting their money's worth."

Additionally, Vindman was caught in an apparent contradiction late in the day by Republican Ohio Rep. Brad Wenstrup. Vindman testified earlier in the day that he did not discuss his concerns about Trump's July phone call with Morrison, his superior, because he was unavailable.

But, under questioning from Wenstrup, Morrison confirmed that Vindman had given him edits of the transcript of the call, on the same day that Vindman testified Morrison was unreachable.

Arizona GOP Rep. Paul Gosar, for his part, offered a blunt assessment of Vindman's testimony, tweeting: "I think people need a reminder:  the democrats said they would impeach starting in December 2016–before @realDonaldTrump was even sworn in.  This is a hearing looking for a reason. It’s corrupt and immoral.  The dude in the uniform is a seditionist."

The impeachment inquiry has focused on a possible link between military aid to Ukraine and investigations sought by Trump pertaining to the Bidens and Democrats. The questions arose after the July 25 phone call led to a whistleblower complaint alleging that Trump was trying to pressure Ukraine into helping him.

"As we have heard from other witnesses, when Joe Biden was considering whether to enter the race for the presidency in 2020, the president’s personal lawyer, Rudy Giuliani, began a campaign to weaken Vice President Biden’s candidacy by pushing Ukraine to investigate him and his son," Intelligence Committee Chairman Adam Schiff, D-Calif., said in his opening statement.

Nunes opened his remarks by welcoming people to "Act Two of today's circus," dismissing the inquiry as a partisan exercise.

"It's an ambitious attack to deprive the American people of their right to elect a president that the Democrats don’t like," Nunes said. "The chairman of this committee claims that democracy is under threat. If that's true, it's not the president who poses the danger."

Both Volker and Morrison previously gave closed-door interviews to the inquiry: Volker provided investigators with a package of text messages with Ambassador to the European Union Gordon Sondland and William Taylor, the U.S. chargé d'affaires for Ukraine, who said he grew alarmed at the possible linkage of the investigations to the aid.

Morrison, who served as the NSC's senior director of European and Russian affairs, has told lawmakers Trump didn't want tax dollars funding Ukrainian corruption and remarked that he wasn't concerned Trump's calls with Ukraine's leader were tied to his political interests.

Morrison resigned from the NSC last month. In his testimony Tuesday, he said he left on his "own volition" and made the decision "before I decided to testify."

Among the biggest revelations Tuesday morning came when Vindman acknowledged communications with an unnamed intelligence official -- during an at-times tense exchange with Republicans, immediately raising apparent questions over whether he could have been a source of information for the anonymous whistleblower who reported the call.

Morrison also said he had heard others express concern that Vindman was a leaker, and could not be trusted with key information.

Schiff interjected to express concern that Republicans were trying to out the whistleblower through the questioning. After consulting his attorney, Vindman said, "Per the advice of my counsel, I've been advised not to answer the specific questions about members of the intelligence community."

Still, Vindman told lawmakers, "I do not know who the whistleblower is."

That claim prompted Donald Trump Jr. to accuse Vindman of perjury. “I’d like them to be treated like I would be if I lied to Congress," he told Fox News late Tuesday.

Vindman was largely critical of Trump's call with Zelensky, describing the investigation "demand" as "improper." At one point, Vindman described his reaction to Trump’s call as one of "shock."

"Frankly, I couldn’t believe what I was hearing," he testified. "In certain regards, my worst fear of how our Ukraine policy could play out was playing out."

The other morning witness, Williams, also expressed concern about Trump's call with Zelensky, saying, "I found the July 25th phone call unusual because, in contrast to other presidential calls I had observed, it involved discussion of what appeared to be a domestic political matter."