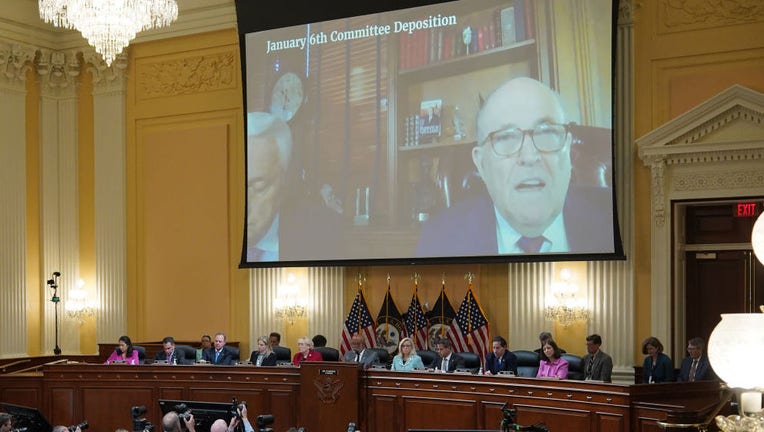 Rudy Giuliani, former lawyer to Donald Trump, is displayed on a screen during a hearing of the Select Committee to Investigate the January 6th Attack on the US Capitol in Washington, D.C. (Mandel Ngan/AFP/Bloomberg via Getty Images)

Yet those traditional Nielsen company yardsticks don't begin to measure the true reach of what is being said there.  Memorable moments from each hearing are sliced for quick consumption on countless news programs, comedy shows and online, to the point where some have been seen more times later than when they were live.

In many respects, it's the first congressional hearing in memory that seems specifically designed with modern media needs in mind, said Jeff Jarvis, a City University of New York journalism professor and frequent blogger on the media.

"That has already worked," he said.

While it's impossible to know what — if anything — covered in the initial stages of the hearing will stick much beyond the week's news, there are already breakout moments and characters.

Hours after the allegation had been made, the clips were featured in the monologues of top-rated late-night comics Stephen Colbert and Jimmy Kimmel. The shows are typically seen by a combined audience of nearly 5 million people each night, with many more people watching online the next morning. Kimmel accompanied it with a film package of times when Giuliani acted oddly in defense of Trump.

The episode resonated in part because it was a connectable moment in an otherwise very serious story, said Robert Thompson, director of Syracuse University’s Bleier Center for Television and Popular Culture.

"Having people who are major figures in a national political setting outed for being wasted is something that people can find immediately understandable," Thompson said.

Former Attorney General William Barr's recorded testimony that he found Trump "detached from reality" with some of his claims about election fraud was the lead in several news stories about Monday's hearing. It was a vivid and disturbing image of a former president from the man who ran Trump's Justice Department.

The ABC, CBS and NBC evening newscasts that night all featured the clip of Barr's comment, and together the three programs typically reach more than 20 million viewers — or double the amount of people who saw the hearing live.

There's no count of how many times it was repeated on cable news, or estimate of how many people saw it that way.

Two anecdotal examples illustrate the extent to which it was seen online. A clip of the moment posted by Reuters on Facebook was watched 928,000 times, and the clip posted on The New York Times' Instagram account was seen 404,000 times.

Filmed testimony from Ivanka Trump and her husband Jared Kushner has been particularly potent, in large part simply because they come from the family of a man who prizes loyalty.

A clip of Ivanka Trump saying she trusted Barr’s assessment of the fraud allegations amassed more than 1.6 million views in an Instagram post published by The Shade Room, a media outlet that focuses on celebrity entertainment, and 1 million when Bloomberg shared it on Twitter. Twitter posts of the video uploaded by MSNBC and the committee itself got more than 900,000 views together.

A video of her recollection of a phone call her father made to Vice President Mike Pence on the morning of Jan. 6, 2021 was shown on each of the three evening newscasts on Thursday, sometimes accompanied by the colorful descriptions of his language.

Kushner's halting response when asked about what he had said to his father-in-law about Giuliani — as if he was weighing in real time what it meant to be under oath — became fodder for jokes.

Previously little-known, former White House attorney Eric Herschmann has become a breakout star this past week for his filmed testimony concerning his conversations with John Eastman, architect of Trump's failed maneuvering to hold onto power.

Editing his own colorful language, Herschmann recalls saying "are you out of your effing mind?" when Eastman talks the day after the Capitol riot about a potential appeal of Georgia election results. Like a stern parent, he tells Eastman that the only words he wants to hear from him are "orderly transition" and advises him to "get a great f-ing criminal defense lawyer. You're going to need it."

Recognizing the testimony's potential impact, Cheney released it on Twitter the day before it was prominently featured in the hearing, giving it extra attention. That also served to highlight the committee's finding that Eastman had unsuccessfully sought a presidential pardon.

Politico even did a story on the art hanging on the wall behind Herschmann during his testimony.

Cheney's prosecutor-like outline of the committee's case at the top of its only prime-time hearing drew wide attention, along with some advice that may live longer than her political career.

"Tonight, I say this to our Republican colleagues who are defending the indefensible: There will come a day when Donald Trump is gone — but your dishonor will remain," she said.

The Associated Press' tweet with video of Cheney making that remark has been seen more than 1 million times.

Someday, depending on how history regards the events of Jan. 6, 2021, it may wind up the moment most recalled, like when it was revealed during the Watergate hearings that John Dean has warned Richard Nixon about a "cancer on the presidency," Thompson said.

"I see that as the classic quote," Thompson said.